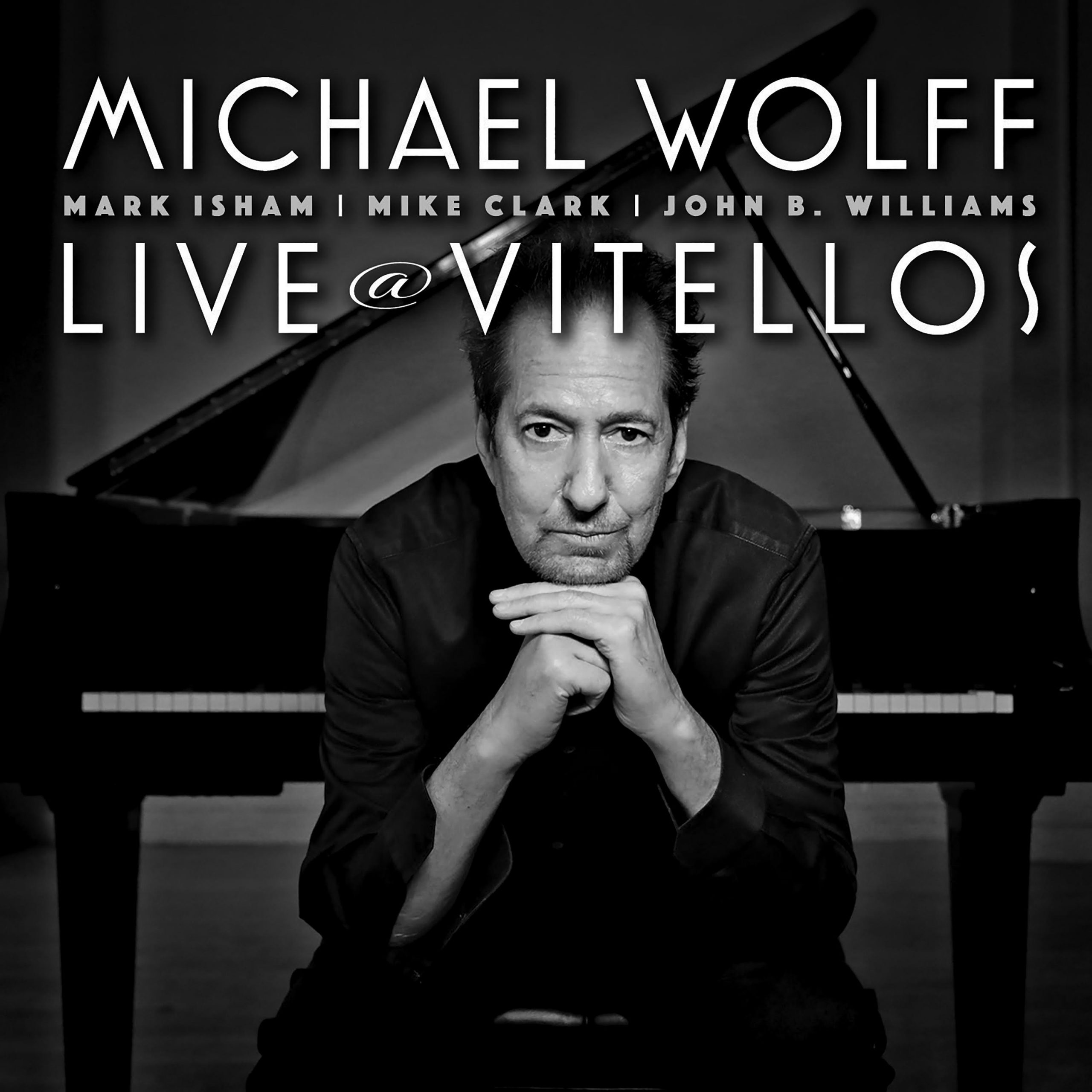 Award-winning pianist Michael Wolff, known for an impressive and eclectic career that has spanned five decades, will release his latest recording Live at Vitellos on March 19th, 2021 with Sunnyside Records. Surfacing a decade after its recording at the iconic Los Angeles jazz club in 2011, Live at Vitellos captures a stirring snapshot of a stunning live performance – something that is so sorely missed during the COVID era. On Wolff’s 20th outing as a leader, the multifaceted trumpeter Mark Isham augments the stalwart rhythm section of long-time Wolff compatriots John B. Williams on bass and drummer Mike Clark. This warm live recording instantly transports listeners to a night of musical magic and intrigue over the course of seven spellbinding tracks.

Live at Vitellos showcases the dazzling chemistry between the exquisite Isham and the ever-lyrical Wolff as they perform this set in top form. Though Wolff and Isham’s friendship dates back to the 1970’s, this stint at Vitello’s marks their first official collaboration. “From the very beginning, Mark was always a beautiful player and a master of harmony,” reflected Wolff. “I knew one day we would do a project together.” That day finally came in the form of two nights in late August in 2011 at Vitello’s. Located in Studio City, Vitello’s is one  of Wolff’s favorite venues to play in the city. “I have always liked the intimacy and the sound of the room and the piano they had there at the time was extraordinary.”

Wolff enlisted his longtime bandmates for the hit: stalwart bassist John. B Williams and legendary drummer Mike Clark. It’s evident from the first note of Live at Vitellos that these players have a shared history; Clark and Wolff bonded during the 1970’s when they were touring with Cannonball Adderly and Herbie Hancock’s Headhunters, respectively. Since then, they’ve gone on to perform together in a variety of settings, live and recorded, and notably in Wolff’s jazz-world band Impure Thoughts. Similarly, Wolff and Williams’ relationship dates back to the same period, and they too have performed together often over the years – including in the Arsenio Hall Band, of which Wolff was famously the Musical Director of from 1989 through 1994. To help bring his vision to life, Wolff brought in the illustrious producer and composer Nic. tenBroek, whose credits include Nancy Wilson, Bobby McFerrin and Les McCann, among others, as well as the great Oscar-nominated sound engineer Dan Wallin.

In putting together the program, Wolff chose material that would best compliment the players and feature Isham’s beautiful and exciting trumpet playing. Live at Vitellos features four Wolff originals, two classic compositions by Wayne Shorter and another co-written by Clark and saxophonist Jed Levy. Live at Vitellos kicks off with “Ballad Noir”, a moody Wolff original that was written for The Tic Code (2000), a Gary Winick-directed film loosely based on Wolff’s life as a jazz pianist with Tourettes syndrome. This emotive opener sets the tone, giving the proceedings a noir overtone through Isham’s sensuous sound, and melodic approach to soloing. The energetic “Lagniappe” (named for the 13th treat of a baker’s dozen) comes next, and particularly showcases the fiery rhythm section with a burning solo from Clark. “The harmonic structure is all based on one pedal tone and allows us to change the color on a dime. We all listened to each other and let the music and spirit of the moment guide us,” said Wolff.

“Fall”, one of Wolff’s favorite Wayne Shorter compositions, comes next followed by the bluesy “Falling Down”, which features Isham and Wolff dancing over Williams’ rooted, funky bass line while Clark lays down one of his signature beats. Wolff and Isham’s experience in composing for film shines on “The Conversation”, a poignant ballad that would feel perfectly at home accompanying the silver screen. “I wrote this piece for a love scene between two people who are circling each other, finally realizing that they are meant to be together,” described Wolff.

Another Shorter tune comes next – the jazz bible staple “Nefertiti”. While all four musicians are intimately familiar with this piece, and have performed it in various settings,  this particular rendition rang special to Wolff, as the band had an opportunity to stretch, and breathe together here as a cohesive unit. The funky and fun “Loft Funk”, contributed by Clark, closes out the set on a high note.

In the album liner notes, producer Nic. tenBroek reflects on the undeniable artistry displayed by these four musical titans, and the magic they created on two nights in Los Angeles a decade ago. “Modern day record producers often find themselves in the unfortunate position of hiring studio fixers and technology experts to make presentable records. This project required none of that. Simply putting 4 masters of the craft together on stage… and engaging a GRAMMY Award-winning recording engineer to capture it all over 2 musical nights of live performance was all that was required,” adding, “…the listener is included in improvisational music at its finest.”