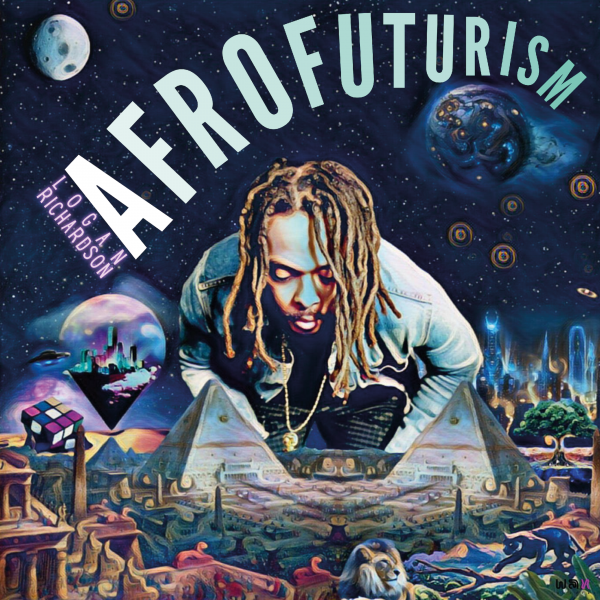 Whirlwind Recordings is proud to announce the March 12th release of AfroFuturism, the fifth album by alto saxophonist, producer, and composer Logan Richardson. Richardson’s career has been marked by his deep engagement with the Black American improvised music tradition as much as by his fearlessly open-minded embrace of the contemporary sounds of the global diaspora and his keen gaze towards the future.

AfroFuturism (his fifth solo album) synthesises all those elements together into a stunningly audacious statement that is epic in its scope while providing a deep, intimately personal view into its creator’s inner life. The core of the album is a series of towering alt-rock/trap/wonky beat soundscapes created Logan’s extensive range of keyboards, synthesizers and programming along with the latest iteration of his Blues People band – Igor Osypov on guitar and Peter Schlamb on vibes and keys, with Dominique Sanders on bass and sharing production duties, and the thunderously virtuosic drumming of Ryan J. Lee and Corey Fonville rounding out the rhythm team. Logan intersperses these with an array of diverse sonic interludes, scraps of found audio, unexpected, limpid pools of introspective strings performed by Ezgi Karakus and quiet glades of hushed balladry from long-time collaborator, vocalist Laura Taglialatela. Over all, his unmistakable keening voice on alto sax provides the constant narrative thread. “I was trying to get back deeper to the core of my artistic voice: using fresh production processes to mix in my interconnected influences and all the sounds I hear, while trying to find a sense of roots.”

The album starts with the voice of Stefon Harris introducing the epic ‘The Birth Of Us’ – a fully through-composed piece for the whole band -“Frank Zappa, Queen, Brian Wilson and Radiohead meets Schoenberg in a sci-fi 80s lounge,” laughs Logan. ‘Awaken’ (from a poem by Logan’s mother) and ‘Sunrays’ (with Laura Tagliatela and Corey Fonville) explore different voice and textual combinations to create enchanting oases of sound: “I was trying to tell a story – a bit about me, but then about us all.” ‘For Alto’ is a nod to fellow altoist Anthony Braxton, while ‘Light’ is a ballad featuring Logan duetting with himself – “I’m addicted to ballads – they’re one of the most exposing things,” he confesses. ‘Trap’ is just that – Logan’s interpretation of the contemporary Southern-US sound.

A field recording of his great-grandma singing introduces ‘Farewell, Goodbye’ – a vocal elegy, sung by Taglialatela, for the late lamented McCoy Tyner. ‘Black Wall Street’ introduces a fresh, unexpected twist via the lush strings of cellist Ezgi Karakus combining with Logan’s sax to create an oasis of acoustic sound, but the underlying message is sombre, remembering the Tulsa Race Riots of 1921. There’s a burst of found audio narration from Busta Rhymes before the final trio of tunes: the Blues People band return for the muscular ‘Round Up’ a trenchant musical commentary on by the police behaviour during contemporary American protests, Logan and Laura combine with an alternately skittering and lush electronica for ‘According To You’, and then the journey ends with the gospel inspired uplift of ‘Praise You’ – “A song for God, for the earth, the rain, being thankful for the totality.”

Logan summarizes: “I always feel strongly about all my projects, but this one was so fluid in the way we produced it and the way the different voices came together. It feels like something truly special.” As one of today’s most singular voices in contemporary music, with AfroFuturism Richardson delivers not only a hugely impressive statement, but one with a direct and urgent message for the future that is rooted in his own and the larger contemporary Black American state of affairs, while reminding us of his musical unpredictability. One can only imagine what he’ll do next.