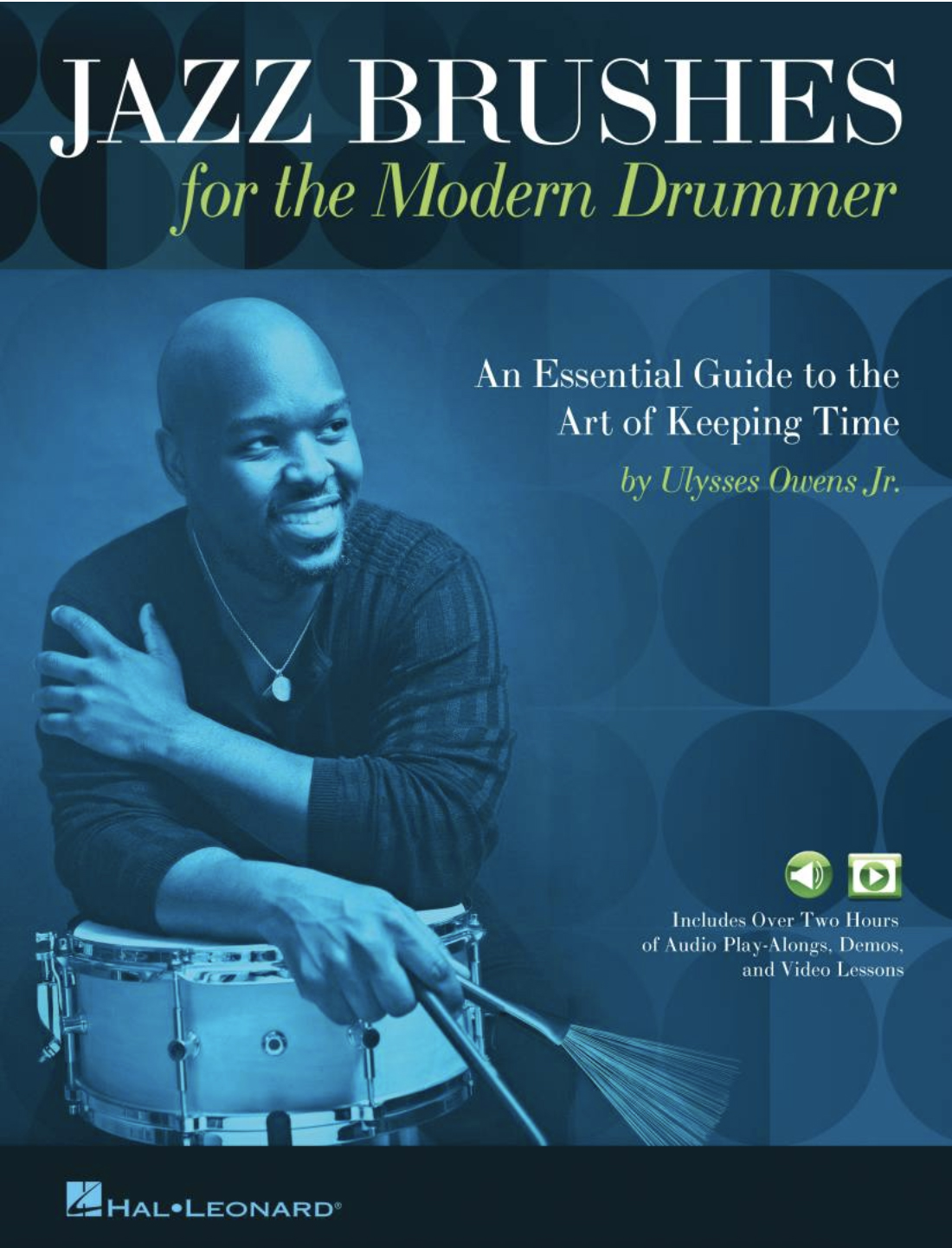 Consummate Performer, Producer, Author and Educator Ulysses Owens Jr Announces the Release of His New Educational Book ‘Jazz Brushes for the Modern Drummer: An Essential Guide to the Art of Keeping Time’, Published by Hal Leonard

“Jazz Brushes for the Modern Drummer”, the latest educational release from celebrated drummer Ulysses Owens Jr (Christian McBride, Gregory Porter, Kurt Elling, Joey Alexander, and many others) and Hal Leonard, is a revelation in the world of jazz percussion; an essential guide to the art of keeping time.  The book offers readers insight into the history of the development of the brushes in the jazz artform, along with exercises and illustrations to help the reader play with authenticity and ease.  The release of this compendium of insider knowledge marks the first educational book released by a prominent drummer from the modern age.  “Jazz Brushes for the Modern Drummer” features educational material that has never before been recorded into a book format, and the first playlist of its kind featuring a multi-generational list of drummers exemplifying their brush techniques.

“Finally, I took the time to not only chronicle the masters,” Ulysses notes, “but also speak about my peers and those that I have learned a great deal from. Within the book is a multi-dimensional approach to learning the brushes that first begins with a comprehensive history, then application, accompanied with recordings, and video demonstration; giving the reader every opportunity to comprehend, and achieve the answers in real time that will add to their musicianship.”

In the book, Ulysses begins with a historical perspective, delving into the role of brushes, the necessity of keeping time, and the configurations of a jazz ensemble.  Next, the author discusses the methodology with which readers can approach their brush-work.  In later segments, Ulysses discusses the application of tools of the trade, keys to playing good time, the importance of practice, how to craft a drum solo and much more!

The paperback book / audio-video package, including 80 pages of educational material and retailing for $24.99, features:

Readers should keep an eye out for Ulysses’ second book, “The Musicians Career Guide: Turning Your Talent into Sustained Success,” which will be published by Skyhorse Publishers, and distributed by Simon and Schuster, January 2021. His third book, “mUsings”, a collection of blogs will be self-published and released in the Fall of 2021.

More About the Author:

A drummer who “take[s] a back seat to no one” (The New York Times), performer, producer and educator, Ulysses Owens Jr. goes the limit in the jazz world and beyond.

Claiming four successful albums of his own (It’s Time for U, Unanimous, Onward & Upward, and Falling Forward.) Owens has also gained special attention for his performances on the GRAMMY award-winning albums Dedicated to You (Kurt Elling) The Good Feeling (Christian McBride Big Band.) GRAMMY award-nominated albums; Giant Steps,” and Countdown (Joey Alexander) Out Here, Live at The Village Vanguard (Christian McBride Trio) and most recently, Nat King Cole, and Me (Gregory Porter.)

Owens’ most recent album, “Songs of Freedom,” was released on the Resilience Music Alliance label, and selected by JAZZIZ Magazine as “One of 10 Jazz albums to listen to,” in March 2019, and also listed as one of the “Best Albums of 2019 “by Rolling Stone Magazine.

Owens also remains tightly connected to his hometown of Jacksonville, Florida where his family founded Don’t Miss a Beat, Inc., a non-profit organization empowering young people to dream big and give back to their communities through a blend of musical, artistic, academic, and civic engagement programming. As the Artistic Director for DMAB, Owens creates programs for over 500 children annually. He is also the “Educational Artist in Residence,” at Savannah Music Festival Jazz Academy and the “Jackie Cornelius Artist in Residence” at Douglas Anderson School of the Arts where he works with the Principal to ensure a new forward-thinking curriculum and school culture that is inclusive and promotes diversity; creating equal opportunities for all students. Recently he was also asked to serve on the board at the Historic Florida Theatre, and nominated for the “Robert Arleigh White Award for Advocacy,” by the Cultural Council of Greater Jacksonville for their upcoming 44th Annual Arts Awards.