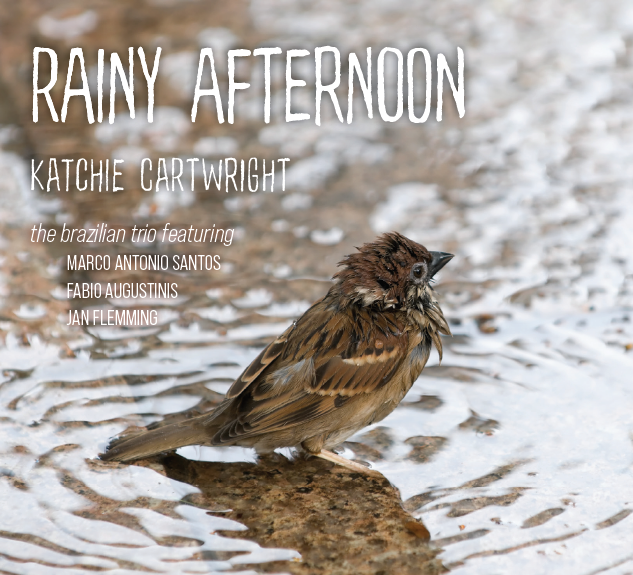 Flutist-ethnomusicologist Dr. Katchie Cartwright is excited to announce the September 18, 2020 release of her latest project as a bandleader, Rainy Afternoon.  This 4-track EP highlights Cartwright’s playful virtuosity  on the flute refracted through a Brazilian lens.  A musical polymath, Cartwright’s curiosity has led her to a lifelong exploration of jazz and the world traditions it relates to, her ethnomusicological training guiding her in the process. Along with Katchie on her latest musical adventure is her ‘Brazilian Trio,’ featuring guitarist Marco Antonio Santos, drummer Fabio Augustinis and for the opening two choros, accordionist Jan Flemming.

Rainy Afternoon is an extraordinary document of Cartwright’s long-standing interest in Brazilian music, one path on a journey that has led this artist to her pursuit of a wide array of musical genres in her critically acclaimed releases.  Cartwright showcased her vocal jazz prowess on Live! At the Deer Head Inn.  Her 1994 debut release was a live debut at a storied jazz club in Delaware Water Gap, Pennsylvania, where Cartwright grew up.  She dug deep into John Cage’s songbooks with her jazz quintet in La Faute de La Musique, and collaborated with Indian musicians in improvisations on Lawrence Ferlinghetti’s poetry in A Mumbai of the Mind. Continuing to speak to her immense range as a musician, Cartwright delved into what she called “great global songbook” repertoire on Tales & Tongues, singing in Portuguese, Italian, French, Spanish, Yiddish, and Ladino.  Now, Katchie is thrilled to release Rainy Afternoon, a meditation on Brazilian jazz and choro, for which she returns to her first instrument, the flute.

Growing up, Katchie absorbed many musical styles.  Her mother, a Broadway singer, dancer and actress, and her father, a pilot, exposed her to a wide range of sounds redolent of their own experiences and travels—from Charlie Parker’s bebop to Babatunde Olatunji’s Nigerian drums.  Somewhere in that breadth of influences was a box of Brazilian LPs belonging to her grandfather, including João Gilberto’s early bossa nova recordings and Dori Caymmi’s authoritative interpretations of samba.  Katchie kept returning to that music in her grandfather’s collection, and the body of Brazilian music it represents.  Years later, clarinetist Anat Cohen drew her attention to choro, an engaging style developed in 19th-century Rio de Janeiro.   “Choro shares roots with early jazz,” she says, “and yet it sounds completely different. The feeling is deeply Brazilian but it’s also mischievous, like bebop.”  Finding a sense of belonging in the vibrant choro tradition, the inspiration for Rainy Afternoon was born.

This beguiling release begins with the warm sophistication of Paulo Moura’s “Tarde de Chuva (Rainy Afternoon)”.  This track sets the tone for an album rife with stellar interplay between the four virtuosic musicians.  Katchie’s flute sounds gorgeously unrestrained, its lines interwoven in lovely fashion with those of Marco’s guitar and Jan’s accordion.  The album continues with another choro, Zequina Abreau’s “Tico-Tico no Fubá (Sparrow in the Cornmeal)”.  Written a little more than a century ago, this composition has been widely covered by musicians of many stylistic persuasions, including Charlie Parker, New Orleans piano king James Booker, and mambo-era Cuban bandleader Frank “Machito” Grillo.  Katchie’s take on this classic tune rides a more relaxed tempo, but retains a lot of Machito’s proudly assertive attitude.  Katchie’s flute soars over the track’s rhythmic foundation provided by Fleming and Augustinis, reminiscent of the sparrow from the tune’s title.

The second half of the album delves into the ways in which the sound of jazz has been distilled within and influenced by Brazilian traditions, and vice versa.  “Caminho de Casa (On the Way Home)” is a beguiling piece performed by Brazilian pianist and composer Nelson Ayres whose music acts as a gateway between the two proud traditions explored on this release.  Santos, who first introduced this composition to Katchie, is featured prominently on the piece, while also taking on core comping responsibilities in the absence of Flemming.  The more pared down trio setting provides a more tender landscape for Katchie’s supple tone to live within; Santos intertwining harmonically with Katchie’s masterful melodic invention while Augustinis provides clave along with sensitive reactions and responses to the other two players.  Rainy Afternoon concludes with a trio rendition of “Groovy Samba”, a spirited composition from Cannonball Adderley’s 1962 album “Cannonball’s Bossa Nova” which featured the sax titan alongside the Bossa Rio Sextet of Brazil with Sergio Mendes on piano.  Here, Katchie channels some of Cannonball’s soulful, bluesy alto sax appeal alongside the deeply grooving rhythm section of Santos and Augustinis.  “One the one hand, it’s a bluesy little jazz tune,” Katchie says. “But of course, it’s also something else, something very Brazilian in its heart.”

On Rainy Afternoon, we hear a rumination on the long relationship between the jazz and Brazilian music idioms; an interest that has followed Dr. Katchie Cartwright throughout her extensive discography as a musician, her ethnomusicology endeavors and also her successful radio show “Caminhos do Jazz” which airs Saturday mornings on KRTU 91.7 FM in San Antonio.  Every note and phrase emanating from Katchie’s flute espouses the love, respect and deep knowledge that the artist has for the musical intersection that this release whole-heartedly explores.  As Wall Street Journal Writer Larry Blumenfeld indicates in the album’s liner notes, “The seeds of Brazilian music were planted early in Katchie Cartwright’s life. These sounds—the freedom they imply and enable, the complex feelings they reveal and stir—now flower into a fertile home for her own creativity.”