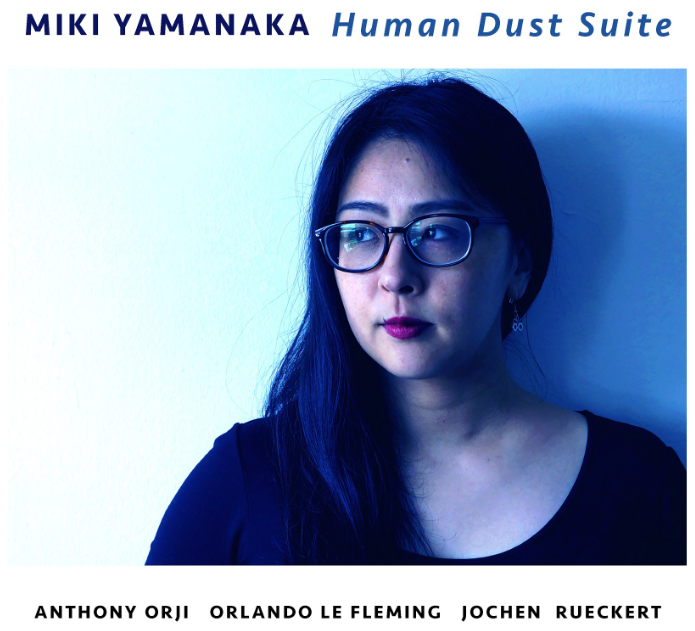 Miki Yamanaka’s Powerful New Album Human Dust Suite will be released on September 18, 2020 via Outside in Music

New York-based musician and composer Miki Yamanaka’s dynamic new album Human Dust Suite will be released on Outside in Music on September 18th, 2020. A follow up to her critically acclaimed debut Miki (Cellar Live, 2018), Human Dust Suite paints a profound portrait of the human experience, with the eponymously named 5-part suite as the centerpiece. Yamanaka, who on this outing performs on vibraphone in addition to piano, is joined by alto saxophonist Anthony Orji, bassist Orlando le Fleming, and drummer Jochen Rueckert.

Human Dust Suite takes its name and inspiration from Hungarian-American conceptual artist Agnes Denes’ striking photograph “Human Dust”. Produced in 1969, the subject of Denes’ photograph is, at first, startling: a mound of human remains after cremation. When Yamanaka first encountered the work on display at The Art Institute of Chicago, she realized something obvious, yet deeply profound: “in the end, we all end up the same way.” This moment inspired her to compose the “Human Dust Suite”, each movement representative of a different body part. Each title symbolizes something greater that leads to happiness- like Movement III, “Tummy”, inspired by a love for food and nourishment, and IV, “Feet Go Bad First”, because, as Yamanaka says in her liner notes, “how awesome to be able to walk and to run.” This introspective meditation on humankind speaks to the strength and unity of humans, as a response to the scene of human frailty that Denes’ artwork seems to conjure.

Master organist Larry Goldings writes in the album’s liner notes that ““The Human Dust Suite” is the centerpiece of this record, and a wonderful example of the breadth of Miki’s musical vision.”  He goes on to say, “…let the music herein be a reminder that great jazz requires togetherness. And Miki Yamanaka and her band have their togetherness, together.” In a time of social distancing, Goldings’ words resonate deeply.

While “Human Dust Suite” is the heart of the album, it is bookended by three songs on each side that are decidedly more lighthearted and showcase Yamanka’s range as a composer. The album’s opening track, “Pre-School” is inspired by jazz great Lee Konitz while “March” is Yamanaka’s tribute to an idol, Mulgrew Miller, whose playing and composing had a profound effect on her. Her original composition “First Day of Spring”, which particularly highlights Orji, comes next before launching into the “Human Dust Suite”.

Two originals come next. “O 2017” is described as a “palate cleanser” and features the leader on vibraphone. “This song and “Hatsu” (from the suite), were written for two parts, and I decided to overdub those melodies and harmonies on vibes,” said Yamanaka, adding that she practiced her vibraphone chops diligently at Smalls Jazz Club, where she is a regular performer. “After The Night” is the final original, before leading into an innovative 5/4 take on Randy Weston’s “Berkshire Blues”.

Human Dust Suite is a career milestone for the Kobe, Japan native, who has lived in New York City since 2012. A student of Jason Lindner, Jeb Patton, Fred Hersch, Sam Yahel, and Larry Goldings, in 2015 she was one of three pianists selected to participate in “Betty Carter’s Jazz Ahead”, an intensive composition residency at the Kennedy Center. She earned her Master of Music degree from Queens College. Miki has appeared in concert with many notable musicians including Steve Nelson, Seamus Blake, Jerry Dodgion, Victor Lewis, Rich Perry, Antonio Hart, and Peter Bernstein. She holds residencies at Smalls and Mezzrow Jazz Clubs in New York City and has had multiple week-long engagements at Dizzy’s Club Coca Cola since 2016. She is the current pianist in the Philip Harper Quintet, the Roxy Coss Quintet, and the Antonio Hart Group. Miki recorded an EP, “Songs Without Lyrics” in 2012, which featured Lawrence “Lo” Leathers, Tivon Pennicott, and Spencer Murphy and released her aforementioned album, “Miki” with Steve Nelson, Orlando le Fleming, and Bill Stewart in 2018.