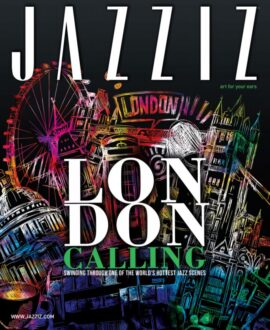 Chase Baird’s new studio ensemble functions like an ecosystem. The New York-based saxophonist released his second LP, A Life Between, with the star-studded lineup of pianist Brad Mehldau, drummer Antonio Sanchez, bassist Dan Chmielinski and guitarist Nir Felder. There are no overlapping personnel from his 2010 debut Crosscurrent. Although this iteration of Baird’s group may be new, their interplay teems with life.

Throughout the broad stylistic terrain of his seven compositions — juxtapositions of ’90s rock (namely Radiohead), hard bop, post-bop and 19th-century classical — Baird’s solos leave ample room for dialogue. During his solos on the hazy ballad “Dream Knows No End,” each phrase echoes through the ensemble in a string of permutations that circles back to support him as he dances over the next change. Baird’s rough-hewn tenor sound, enlivened by a rich repertoire of articulations, perfectly complements the warm ambiance that Felder sculpts from a refreshing deployment of effects against the muffled body of his traditional jazz guitar tone. Their chemistry is most fruitful on the title track, a nocturnal confluence of Chopin and Coltrane. Mehldau’s opening solo conjures a swift groove that gives motion within the confines of the wistful atmosphere. Baird and Felder then emerge frolicking, trading licks that soon weave into a rapturous joint solo. With a penchant for horn-like melodies that spill and splay over the groove, the guitarist deftly matches his bandleader’s nimble, cathartic lines.

A similar dynamic emerges within the rhythm section. On “Reactor” — an angular, odd-metered banger — Chmielinski outlines the infrastructure in spare but syncopated bounds, granting the space and large-scale framework necessary for Sanchez to adorn the groove with feverish details. Mehldau brilliantly frames the action with echoes of previous fragments. Overall, each musician’s razor-sharp responsiveness allows for cohesive, well-shaped arrangements without relying on the anchor of rote repetition.

Even if your ear doesn’t immediately clue you in, the Curtis Brothers — pianist Zaccai and bassist Luques — are explicit about their pedigree: “the spirit of the great Art Blakey and his Jazz Messengers.” And that in-the-pocket hard bop hits you from opener “Three Points and a Sphere,” the anthemic unison theme with syncopated hard starts and stops, suffused with bluesy melodic content, even in Luques’ solo, pliant and lyrical while hewing to a deep bass heft and avoiding upper-register “guitaristic” flourishes.

The brothers come by the sound honestly, having studied at late Messenger Jackie McLean’s Artists Collective school in Hartford, Connecticut, and doing tours of duty with another former Messenger, alto saxophonist Donald Harrison. As on the brothers’ 2012 Completion of Proof, Harrison is joined by two other mentors and Blakey alums, trumpeter Brian Lynch and drummer Ralph Peterson.

Six of the nine originals here, all by Zaccai, draw their titles from mathematical terms, while three others pay tribute to the elders. Whatever the overarching concept, fleet, next-generation hard bop is the order of the day. That includes the brothers’ deep understanding of Afro-Cuban rhythms, as distilled into the New Orleans second-line undercurrent of  the medium-tempo ballad “Phi” or the shifting flow of Luques’ bass patterns on “Parametric” — where Peterson’s all-over-the-kit cross-rhythms obviate the need for additional percussion, especially in an extended “shout” chorus section.

Despite the hard-driving propulsion, there’s a keen understanding of dynamics as well, whether on the easy 3/4 ballad-swing of “Torus,” with especially eloquent solos from the leaders, or the slow-pressure-build Lynch feature “The Professor.” As the audience on this live album (recorded at Old Lyme, Connecticut’s Side Door) responds to Lynch’s crackling solo, you’re reminded of another verity of hard bop: the impulse to engage.

The odds of young talent succeeding at any task are greatly enhanced by the presence of an effective support system. And that’s precisely what 19-year-old tenor saxophonist Makar Kashitsyn has at his disposal on his debut recording, Jazz Animals. Because of Kashitsyn’s willingness to defer to his highly skilled accompanists on a regular basis, rather than insisting upon consistently dominating the action, he sometimes seems like a precocious contributor to the project as opposed to its guiding intelligence. But his open-minded philosophy, as well as his nascent compositional abilities, help deliver an entertaining present even as they bode well for the future.

A transplanted New Yorker originally from Moscow, Kashitsyn is clearly important to the folks behind St. Petersburg-based Rainy Days Records, for whom giving Russian jazz artists an international platform is a primary mission. As such, they’ve surrounded him with five strong comrades: drummer/producer Sasha Mashin; arranger and composer (of the tricky, beguiling “Song for Chad”) Nikita Mochalin; commanding bassist Makar Novikov; quick-fingered pianist/keyboardist Alexey Podymkin; and the spectacularly gifted guitarist Alexey Polubabkin, who grabs the spotlight and doesn’t let go on his three tracks, especially “Our Song,” in which his solo is sexy and swaggering.

And Kashitsyn? His songwriting chops show genuine promise, with the joyful, propulsive “Going to Ekaterinburg” and “Phone Call,” marked by some tricky dynamic shifts, earning top honors. His playing, meanwhile, is intuitive and persuasive, as on “Confession,” when he responds to showy features by Evans and Lefkowitz-Brown with a passionate expression of his own. Consider it a harbinger.

Veteran trumpeter and composer Wallace Roney experiments with ensemble chemistry on this bracing eight-track set, and the results radiate dynamism and innovation. The 59-year-old former Miles Davis protégé taps the youthful energy of a core group that includes two teenagers at one end of the age scale while carving out a significant role for famed fusion drummer Lenny White, a spry 70, at the other. With several other youngsters in the mix, and the recording brilliance achieved at the historic Rudy Van Gelder studio, the session chalks up high scores on every front.

A subtle recognition of the Davis connection is imparted with the set’s high-spirited opener. “Bookendz,” a piece by multi-instrumentalist Wayne Linsey written for but never recorded by the late trumpeter, charges from the gate with a barrage of jagged, funk-laced rhythms by two drummers — White and the leader’s 15-year old nephew Kojo Odu Roney. Pianist Oscar Williams II solos with dancing lines and billowy chords that float lazily over the churning pulse. Bassist Paul Cuffari is the tendon that connects the percussive elements, while Quintin Zoto’s streetwise guitar voicings provide a welcome, tart accent. Roney’s solo demonstrates his penchant for melodic invention and technical daring. Claiming much of the glory, however, is 19-year-old saxophone phenom Emilio Modeste, whose soprano foray here is the definition of youthful exuberance unleashed.

While Modeste authored two works for the session and Williams one, it is the Lenny White composition “Wolfbane” that deserves special attention. Framed by a slow funk rhythm and a two-bar melodic fragment drawn from Middle Eastern modes, the track, with Modeste featured on tenor, effortlessly blends funk, bop and free jazz into a trance-inducing masterwork. The enchanting “Why Should There Be Stars” highlights the core rhythm section’s stylistic adaptability — and Roney’s masterful ballad playing — while underscoring the set’s laudable stylistic range and exquisite musicianship.

Being both evolutionary and tradition-channeling, jazz is an art form predisposed to honor its most influential creators. The legacies of legends gone by, and some still in the making, are ripe subjects for tribute projects, as this group of heartfelt new recordings attests.

Alto saxophonist and flutist T.K. Blue is a likely candidate to pay homage to the late pianist Randy Weston, who died in 2018. Blue worked with Weston off and on for nearly 40 years, and he channels Weston’s spirit on the aptly titled The Rhythm Continues (JaJa). The album presents a selection of songs from Blue’s Weston-themed suite, as well as tunes by Weston and his chief arranger, Melba Liston.

With its 19 tracks and suite-like structure, the album weaves a tapestry displaying Weston’s enduring essence and influence. Layered horns enrich “Night in Medina,” segueing into the rhythmic charge of “Kucheza Blues.” The luminous ballad “Where” eases into Weston’s signature song, “Hi Fly,” a model of inspired simplicity in the jazz canon, but here folded into an Afro-Cubanized arrangement with the melody left out. Blue receives stellar support throughout from a hard-charging rhythm section, as well as fellow saxophonist Billy Harper and a rotating roster of young pianists.

On the Frank Foster Songbook (Sony/The Orchard), by the Kenyatta Beasley Septet, the two-disc, 10-track live album intentionally avoids Foster’s signature song, “Shiny Stockings,” as well as the generous body of Foster compositions written in his fruitful connection with the Count Basie Orchestra. Instead, trumpeter Beasley creates a portrait of Foster — who died in 2011 and was a Beasley mentor — from a variety of sources, vintages and moods beyond Basie (with the exception of the Basie-aligned blues “Katherine the Great”).

Beasley’s compact big band, with four horns fronting a piano-bass-drum rhythm section, hints at a big band palette, but in lean form, with cameos by fellow New Orleans native Wynton Marsalis, guitarist Mark Whitfield, vocalist Carla Cook and Eric Wyatt on tenor sax. The material ranges from the Latin-tinge of “Cidade Alta” and “Chiquito Loco” to the spidery swing of “Skull Dougery” to the lithe balladry of “Grey Thursday” and “Cecilia Is Love.” The latter, written for Foster’s wife-manager, concludes this fine, mainstreaming set on a lyrical note.