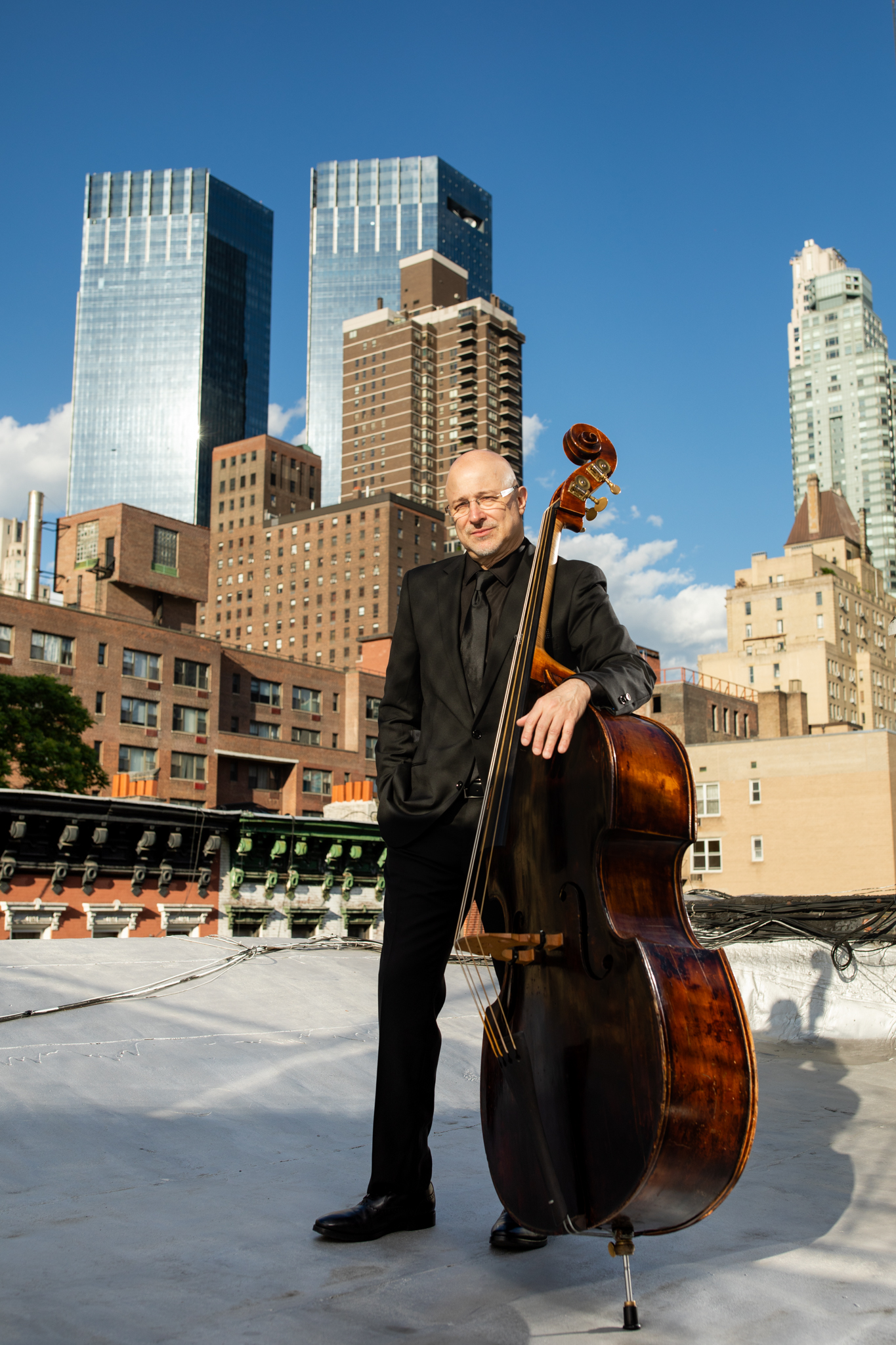 Bassist, bandleader and composer Ben Wolfe delivers this impressive work, Fatherhood both in tribute to his father who passed away in 2018 and to his own son, Milo. It’s an introspective, angular, oft melancholy and complex nine originals and an innovative interpretation of a standard across some very interesting blends of instrumentation. Wolfe was guided by “ways I knew my father would have encouraged.” So, Wolfe set out to make music as directly as possible, cutting no corners, and keeping spontaneity in the forefront. That meant the best studio, the best musicians, self-funding the project, and making the right decisions throughout the process. He brought together familiar cohorts and young emerging talents. He consciously avoided the temptation of soloing, choosing instead to present the overall sound of the ensemble.

Wolfe’s dad, Dan, a former violinist who spent a year with the San Antonio Symphony, introduced Ben to all kinds of music and especially jazz, where he was fond of Monk, Lester Young, and Billie Holiday. Wolfe uses a string quartet on seven of the ten tracks, a technique he’s employed before, but it becomes more meaningful here given how his dad and he both enjoyed jazz and classical. During this recording process, Wolfe had the musicians wear no headphones and play together in the same room. This heightens the spontaneity and gives a warm sound to the recording.

The members of the string quartet are highly acclaimed, including Grammy-nominated violinist Jesse Mills, violinist Georgy Valtchev (Yo-Yo Ma), viola/violinist Kenji Buch (artistic director of Fear No Music), and cellist Wolfram Koesse l(American String Quartet). The emerging young talents include vibraphonist Joel Ross (eight tracks) and alto saxophonist Immanuel Wilkins (two tracks). Joining Ben in the rhythm section are Venezuelan pianist/composer Luis Perdomo (five tracks) and pianist Orrin Evans (five tracks) with drummer Donald Edwards, who has worked with Wolfe on and off for at least 25 years. Other guests appear on select racks which we’ll point out as we describe the pieces.

”Blind Seven” (a reference to the card game ‘spades’) is a tune Wolfe first recorded in 1996 but is rearranged here to an almost unrecognizable degree as the melody does not ensue until two minutes in. It has Wilkins and Ross exchanging complex angular phrases against the string quartet. “Gone Now” is a warm ballad, colored by a lush string arrangement that creates the nostalgic feeling that underlies young British tenor saxophonist Ruben Fox’s Lester Young-like soloing.

”Opener” has no string quartet with a conventional jazz quintet instead helmed by the veteran rhythm section highlighted by Grammy-nominated pianist Orrin Edwards. The front line has tenor saxophonist JD Allen and nineteen-year-old Bahaman trumpeter Giveton Gelin. This is a tight, swinging arrangement. “Uncle Leslie” is a slow-medium waltz for Wolfe’s son, Milo featuring Gelen, Ross, Evans and one of Wolfe few solos, which, as expected, is gorgeous. “The Enforcer” is titled for the late NBA star of The Portland Trailblazers, Maurice Lucas. Wolfe is the enforcer subtlety navigating a unison passage with Ross and then pushing Ross and Allen in their solos.

<P>The remaining five tracks have the string quartet. They bring the romance to “It’s True,” and a cinematic beauty conjuring up the Himalayas in the epic  “The Kora La,” which refers to a pass-through those mountains. Wilkins is impressive on his alto here, standing alone as the only horn against a backdrop of mystery and majesty as the piece shifts from chamber music to modal harmonies to avant-garde dissonance. “First Things Fist” brings back more conventional lyricism as the slow foxtrot tempo nods to Monk. Veteran trombonist Steve Davis joins Ross on the front line, backed by the rhythm section with Perdomo on piano.

”Edged,” as the title implies, is another of the more complex pieces with the adventurous melody delivered in 9/4 time, except in brief sections where the rhythm shifts or is suspended. The melody passes from Ross to Perdomo to the strings and back, creating some interesting ensemble moments. Ross’s work here is evocative of Bobby Hutcherson on Eric Dolphy’s 9/4 tune “Hat and Beard.” In fact, fans of Dolphy, Andrew Hill, and Hutcherson will find other moments they can latch onto here as well. The closer, “What’s New,” is a 1939 standard composed by fellow bassist Bob Haggart with lyrics from Johnny Burke. Of course, Wolfe gives it a more contemporary arrangement and uses no horns as Ross carries the melody on the vibes, with the strings in support. Wolfe feels his dad would have been especially proud of the treatment.