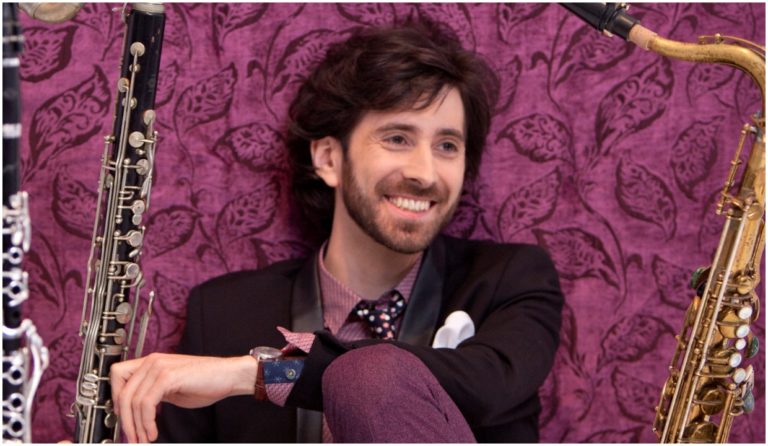 Internationally acclaimed clarinetist/composer Oran Etkin will release Finding Friends Far from Home: A Journey with Clara Net on August 30. Etkin founded the Timbalooloo method of introducing children to music and this new record is a continuation of his innovative music education work. Recorded and filmed on location in Zimbabwe, Turkey, Czech Republic and China with veritable masters of each country’s traditional music, this is an ambitious project that also carried an inspiring message of multiculturality and the significance of deep musical connections beyond borders.

Etkin spoke with JAZZIZ about Timbalooloo and Finding Friends Far From Home, as well as the origins of these projects and his views on the importance of teaching young children the fundamentals of the language of music. Below is an excerpt of our conversation, which has been edited for length and clarity.

ORAN ETKIN: Timbalooloo is a way of approaching how to teach music for children. It’s a method I created that manifests in a few different ways. We have music classes that have a whole curriculum I’ve created and teacher artists I’ve trained to teach them. Those classes have been in New York for many years but now, we just got a grant to teach in the Czech Republic, so it’s kind of starting to get out of New York.

Separate from that, we also have the concerts we do around the world, as well as the CDs and the video content. But at its core, Timbalooloo is a concept of having the instruments come to life as characters, so they can speak some music and children can conceive of music as making your instrument talk.

What is the goal of this early education program?

The goal is to really change the way kids conceive of what music is; something other than having to play certain notes and having to do what’s on a page. It’s really about having them conceive of music as the instruments being alive, talking and expressing themselves, which is what I think of when I’m on stage performing.

At its core, this concept is about redefining how kids can conceive of music and bringing the world of music to children. If you think of most children songs that kids grow up with in the West, like “Twinkle Twinkle Little Star,” it’s all major scales, all 4/4. But kids can do African rhythms, Cuban rhythms…all these rhythms that are thought of as most complex. They can totally get them!

Is it also about teaching children how to communicate through music?

I think music is a language. We learn languages at a very young age and we learn them very fluently, so I think it’s important for kids to be able to learn music through those same pathways at this very young age because that’s how they’re going to become fluent in music. And we all know certain musicians who are fluent in music. When they have an idea, it just comes out of their instruments. They don’t have to think and analyze.

The parallel is also there with how we teach languages. We teach how to conjugate each verb and all the rules of grammar. Then, after two years of studying, you go to a foreign country where you learn the languages but stumble and can’t express yourself. That’s a lot of times how we teach music at an older age too. We teach all the rules and stuff like that, but it really seems like children can learn so much more fluently and they don’t need to think about all the rules. They just end up speaking the correct grammar.

Of course, I do believe that anyone can start music at any age but I do think that if you start kids off at a younger age, then they end up becoming fluent in the language of music.

Where did this interest in teaching and working with kids come from for you?

As a musician, I always felt a responsibility to teach. Growing up, I had a lot of mentors, like George Garzone, Yousef Lateef and Danilo Pérez. I got the sense that part of being a musician is also teaching in whatever way that might be, whether that’s academic teaching or informal, through the community and through mentorship.

Then, I started realizing the way I could really influence kids was by getting them at this young age. I had older students and started thinking when I would try to teach them fundamental things like phrasings and having a hard time, “I wish I had you when you were two ‘cause then we could really get into some stuff!”

How does your new record, Finding Friends Far from Home, fit into the Timbalooloo method?

Always in Timbalooloo, the idea has been to bring music from around the world to children. So, going back to this idea of music as a language, we want to give children the full vocabulary of music. I’ve always incorporated songs from Indonesia, Japan and so on. These scales that you rarely hear in the West from all around the world.

I’ve also been very fortunate to be able to tour around lots of wonderful places and encounter lots of different musicians, and I always wished I could bring it back to the kids that were in the Timbalooloo program and other children. Finally, I had this idea of how to do this through this record and filming some videos, where I work with different traditional musicians.

That was the idea, and it really is growing into the concept of what Timbalooloo is. This idea of becoming aware of music and culture beyond where you live and growing your musicality that way. This is kind of how I appreciated music as a child too. For me, getting music from around the world makes me grow as a musician and I want to share that with children as well.

Have you always had a disposition for discovering music and culture from other parts of the world?

It’s interesting. I was born in Israel and moved to the U.S. when I was four. At home, it felt like Israel and at school, it felt like the U.S. But also, I grew up with this very international feeling that there was not just one place that was my home. I always felt very comfortable with people from different cultures and I could relate to them.

Musically, I also developed an interest in these things early on. I remember that when I was very young, I had a teacher who told me, “You should listen to all these things, you should dance to them. You should really get into them and somehow, they will come out in your playing. When you improvise, when you play over tunes, when you write those tunes, those influences will just come out somehow.”

Finding Friends Far from Home is also the story of your friend, Clara Net…

Yes. The story starts with children chanting, “We want a story.” Then, I introduce the story of Clara being my friend and that one day, we got really curious. So, we packed our bags and flew around the world, and we met people who became our friends and she met instruments who became her friends.

The idea is for kids to understand that Clara, my clarinet, is a character. Clara is a friend of mine. And she is! When I travel, I bring her everywhere. I treat her very nicely and she treats me nicely too. And when I meet new musicians, she is really the one talking with them. So, I present this concept to the kids but it’s actually kind of how I think too. I feel like my clarinet is talking with the instruments.

There’s also a real positive message of multiculturalism and cultural exchange in this project.

Yes, because I think that’s how music has grown for centuries, these points where cultures meet. These ideas of co-operation and cross-cultural exchange are all being challenged today. A lot of the values we’ve been taught as kids are now taken for granted. So, I think it’s an important time for kids to grow up with an example of how you can reach across cultural boundaries and still be yourself.

So, how important was it for you to record the music of this album in location, in places like the Czech Republic, Zimbabwe, China and so on?

Something that’s always important to me when I travel is sharing. Not just taking but also giving. I think musicians around the world are curious about my background and I’m curious about their background. And we can create new music together that way. It’s not just me trying to learn their stuff and then do it their way, which can be a little one-sided. I think when there’s this dialog, that actually helps them take something away from the experience and makes them grow as well, just as it helps me grow.

So, I think it was really important for me to be there with them in their culture. A lot of times, I was living with them. For example, the tracks with the Zimbabwean artists came about because I had a week off between my shows in France and my shows in Zimbabwe. And instead of coming back to the U.S., I ended up living with these traditional mbira families. The night I got there was an all-night ceremony and the first of the Zimbabwean songs on the album is one I learned during this all-night, 14-hour long ceremony.

These are things I could not have learned out of a book or something like that. I could only learn it by being there, eating their food, sharing moments with them but also still being myself. That’s how genuine relationships develop. And I think I developed a really respectful and genuine relationship with each of the people from the different countries of the album.

Did you encounter any challenges in putting this record together?

There definitely were challenges. Like finding studios in Zimbabwe and getting everything to happen. But I actually didn’t start the album with a firm conception of what it would be in the end. I let it happen naturally and somehow when you do that, special things can happen.

Is there a multimedia dimension to Finding Friends Far from Home?

There’s going to be some music videos and also videos where I meet the musicians and Clara meets the other instruments. But as much as possible, not in a didactic way. Building the story of Clara as a character and the instruments as characters talking to each other is the main thing. And I’m also going to be creating a website where you can click on the different countries and see the videos of these interactions with those countries. That way, the kids can see the actual instruments and see the people behind them. They get to see the warmth of that interaction.

Oran Etkin plans a US and Europe tour to celebrate the release of Finding Friends Far from Home, kicking off with an October 5 concert at New York City’s Symphony Space before continuing to California, Washington D.C., Baltimore, Paris and more. For more information, visit his website.