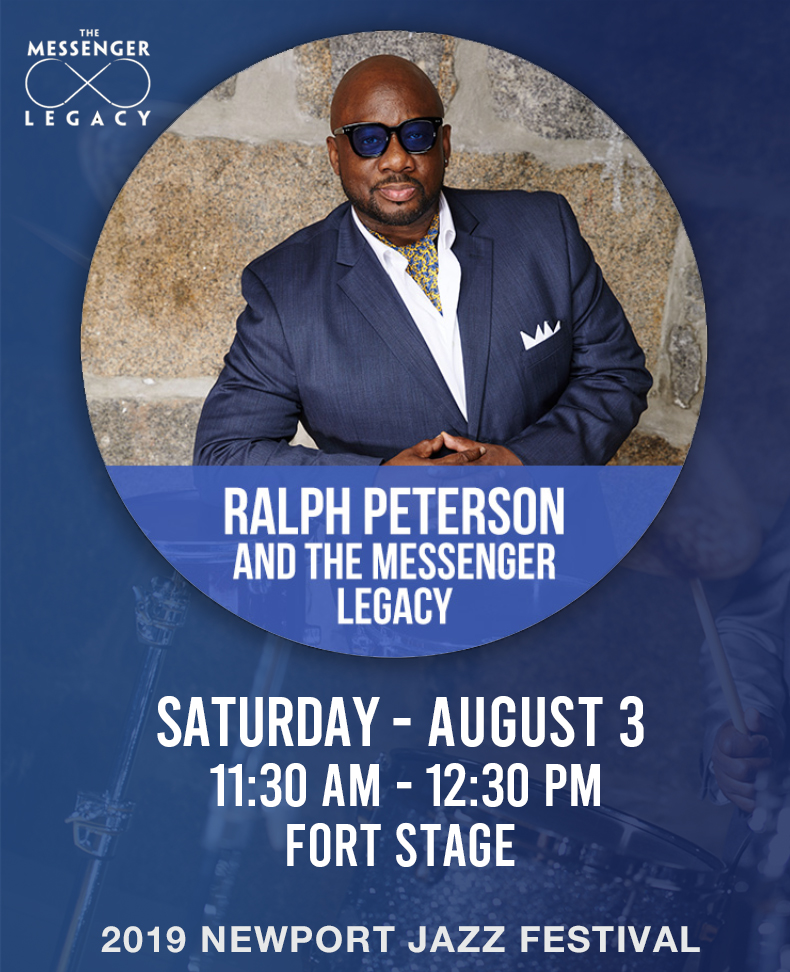 The Legacy Continues with Ralph Peterson and the Messenger Legacy

“The players keep faith with the tradition rather than chancing any 21st century genre-bends, but it was a great tradition, celebrated with expert devotion here.” John Fordham, Jazzwise

“This double disc set proves that the passage of time has done nothing to mute the passion with which Peterson, or the rest of the Messenger alumni, approach the music made under Blakey’s encouraging downbeat.” – Jon Ross, Downbeat

“Like Blakey himself, this band delivers what Wayne Shorter called “the show-stopping stuff.” Given the directness of its robust musicality and hard-hitting skills, the Messenger Legacy band delivers the kind of  ‘bish-bash’ that exhilarates.” – Michael Ullman, The Arts Fuse

When it comes to Art Blakey, there is no living drummer more suited to honoring his legacy than the incomparable Ralph Peterson. As the last drummer chosen by Blakey to play by his side in the Jazz Messengers Two Drummer Big Band, Peterson is tasked with the unique responsibility to carry forth Buhaina’s torch and tradition.  In his role of carrying on the Blakey tradition Peterson has put together a fiery ensemble featuring fellow alumni of the Jazz Messengers who continue to advance the cause of contemporary mainstream jazz as leaders in their own right.  Fresh off the May 20th release of the critically acclaimed Legacy: Alive Vol. 6 at the Side Door which marked Blakey’s 100th birthday, Peterson and the Messenger Legacy Band will be touring extensively throughout the summer and fall, highlighted by a performance at the Newport Jazz Festival this Saturday, August 3rd.  The ensemble looks forward to recording a new studio album in January, which will Donald Brown, among others.

Peterson is proud to present a new iteration of his Messenger Legacy Band which will feature saxophonist Bill Pierce, trumpeter Brian Lynch, bassist Essiet Essiet, and pianist Zaccai Curtis locked in with Peterson’s firm downbeat, and will also feature an additional horn player on a rotating basis: Donald Harrison, Robin Eubanks, Craig Handy, Donald Brown. Pianist Anthony Wonsey will joins the ensemble for select dates as well. The decision to expand the ensemble in this way came from Peterson’s desire to celebrate the many eras and configurations of the ever-rotating Jazz Messengers, mirroring the same grounded capriciousness that was a hallmark of Art Blakey’s long standing ensemble— An expansion of Art Blakey’s Legacy. The addition of Zaccai as well as pianist Anthony Wonsey, the only two members not to have played with Blakey personally, marks the “passing of the torch” to the younger generation – something Blakey was known to do as he fostered young talent.

Tenor saxophonist Bill Pierce joined the Messenger front line in 1980, making his first appearances on Messenger Big Band Live at Montreux, Northsea and Album Of The Year records that introduced the world to Wynton Marsalis.  Donald Harrison joined the messengers in 1982, and Robin Eubanks joined in 1987 alongside his brother Kevin. Trumpeter Brian Lynch and bassist Essiet Essiet were members of the final edition of the Jazz Messengers that played with Blakey until his death at the age of 71 on October 16th, 1990.

The music on the group’s most recent release, Legacy: Alive Vol 6, was culled from the voluminous Jazz Messengers discography of more than one hundred albums. It was recorded live at The Side Door in Old Lyme, Connecticut on October 12th and 13th in 2018, following the band’s debut at Scullers in Boston the previous night, on what have been Blakey’s 99th birthday.  The group’s performances of these classic compositions remain true to the Messenger style of no holds barred energized soloing on lyrical melodic lines with Peterson indefatigably stoking the flames employing the Blakey rhythmic lexicon of driving press rolls and rim shots, exciting tonally sophisticated tom-tom patterns, a relentless sock cymbal beat and ass kicking bass drum accents.

Following the ensemble’s performance at Newport Jazz Festival on August 3rd, the group will perform at the Lesher Center for the Arts on August 24th at 5pm and 8pm, and then at Phoenix Arizona’s Musical Instrument Museum on August 25th, and next at Dakota Jazz Club in Minneapolis on August 27th.  The ensemble will perform at GMMC Digital in Durham, North Carolina from Septemer 6th to 7th and will give a panel discussion at the Walter E. Washington Convention Center in Washington, DC on September 12th, followed by a performance at The City Winery on the same day.

Cape May Jazz Festival,  On November 16th, the Messenger Legacy Band will perform at Philadelphia’s Kimmel Center- Annenberg Theater, and on May 1st to May 2nd, 2020

the band will perform at the Appel room at Jazz at Lincoln Center at 7pm and 9:30pm.