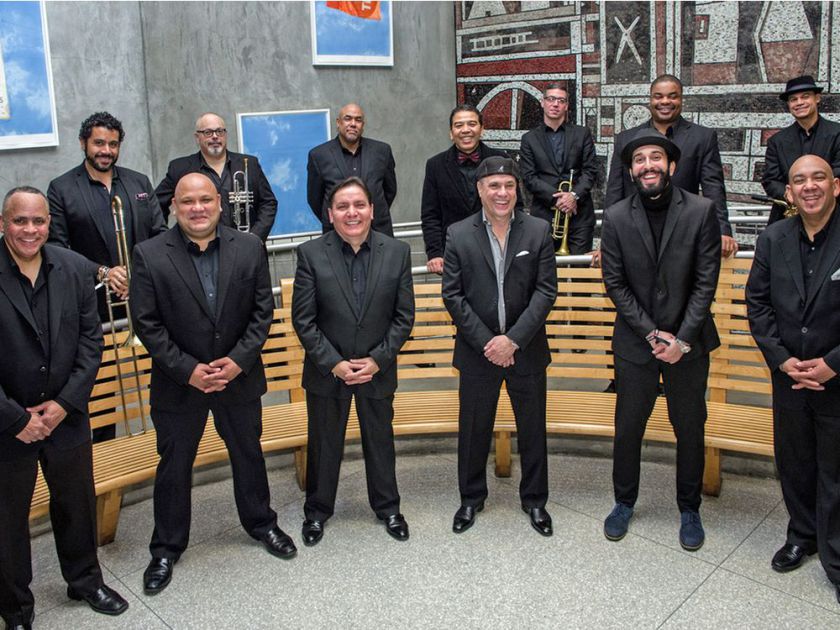 After 15 years the Spanish Harlem Orchestra‘s expertise and passion for tapping the exciting riffs and entrancing grooves of Latin jazz is unquestioned. When they make their Edmonton debut Wednesday, the only decision you may have to make is whether to sit or to dance.

“That’s a huge dilemma for me,” admits Oscar Hernandez, the SHO’s founder-pianist, and most frequent composer-arranger. “We’re mostly playing concerts and that’s my preference, but usually the complaint is, ‘we wanted to dance.’ It is dance music at its best, but for me it’s a lot more than that, so I would like people to sit and appreciate the artistic aspect of the music, too.”

He adds that by the end of most of their concerts “everyone is up dancing anyway.” Either way, the two-time Grammy winning SHO promises 13 seasoned musicians on a mission.

“To be honest, I think part of what has made us popular is that people forgot how this music used to sound decades ago. So when they hear Spanish Harlem Orchestra some people think it’s new. The songs and arrangements are all new but the style concept is not new.”

“It’s very much part of what we do. We like to feature all the guys in the band at some point. That’s a mainstay that characterized the music back in the day, something which has been lost.”

Hernandez calls their sound “salsa dura” or hard salsa. This stronger extension of the sound that took off in the 1970s sets them apart from their more ubiquitous cousin, “salsa romantica,” which tends to play down the music’s intensity.

The band packs five rhythm players with Hernandez’s piano, five horns and three vocalists, many of them hand-picked from the leader’s connections to great Latin jazz ensembles of yesteryear.

Hernandez comes from a family of Puerto Rican ancestry who settled in New York’s rough, South Bronx district in the 1940s, part of a wave of Puerto Rican immigrants to America who brought their rich musical culture with them. Born in 1954, he grew up hearing Latin jazz greats like Tito Puente on record and witnessed the likes of Eddie Palmieri and Ray Barretto in clubs.

“I caught the bug of that development through the music and it was pretty cool. Spanish Harlem was 20 minutes away and everybody who’s Latino in New York used to go there for social events, to shop, or whatever. It was a hotbed of Latino culture and the music happening in those days was about Puerto Rican and Mexican traditions or Cuban son. When I was growing up it was the music you heard in every other window or door, and on the radio, part of a cultural revolution in that city.”

12-year-old Hernandez was taking trumpet classes at the neighbourhood boys club when “divine intervention took over and somebody gave me a piano. We certainly couldn’t afford one, so it was meant to be.”

He taught himself to play well enough to start penetrating the club scene. Later at 25, he went to college and got a music degree, but those early years were invaluable.

“The education I got is something you couldn’t pay for in the best universities. As I got involved in the professional aspect of music at 16, 17, 18, I was surrounded by some incredible musicians. Just having their example and having that sounding board, I learned my craft pretty quickly.”

He wound up on record at 18. By age 20, Hernandez was already touring to Europe, playing for the best. Over the years he’s worked for the Tito Puente, Ray Barretto and Celia Cruz, Latin-pop stars like Ruben Blades and Julio Iglesias. In a big break, he was hired by Paul Simon to arrange and direct music for the songwriter’s 1997 Broadway musical The Capeman. Oh, if you’ve heard the theme to Sex In The City you’re listening to Hernandez on the piano.

His next gift of “divine intervention” happened around 2000 when a music producer for Warner Music called him to create a Latin jazz album. Hernandez put together a band and charts and made the recording only to see Warners drop it. The sessions “sat in the can” two years before a small label issued Un Gran Dia En El Barrio in 2002, only to see it get multiple award nominations. A 2004 follow-up Across 110th Street established the SHO and won their first Grammy.

The SHO’s recent sixth release Anniversary (on Artist’s Share) marked 15 years together with guest spots from Chick Coreo and Joe Lovano. More than just expert, authentic, tight Latin jazz, it’s a true work of art. And when you hear its infectious rhythms, good luck trying not to move.

Tickets: $40 plus service fees from edmontonjazz.com or at the door