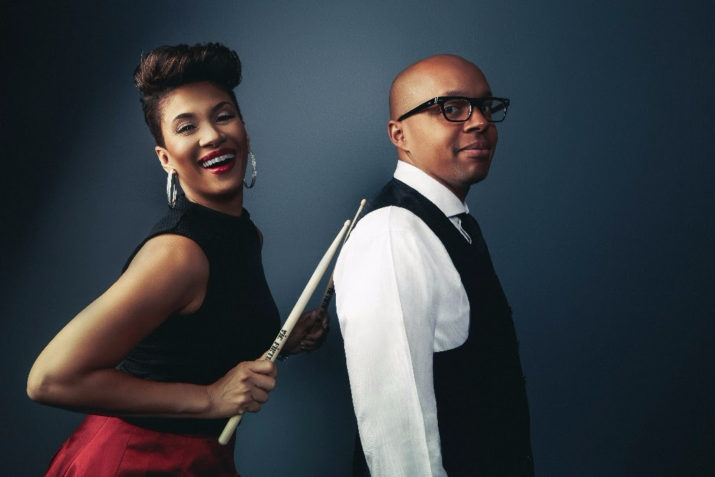 The Journey | The Baylor Project @thebaylorproject

The sanctuary of music often lies in the cradle of the melody. The melody is the first note that can carry the rest of the orchestration, blending each instrument building structure and sealing the song with a strong chorus. Jazz music is built around melodies and complex orchestrations that magically align our ears to our own interpretation without losing a beat.

The Journey: The Baylor Project is a unique fusion of Jazz, Gospel and Soul by husband and wife duo, Jean and Marcus Baylor. Both have consistent track records in music with Jean being apart of the R&B duo, Zhané, and Marcus, a former member of the Yellowjackets.

With major record company homes far behind them, they created their own independent label, Be A Light shortly after the couple married in 2007. The first album, Testimony: My Story, was followed by a holiday EP, Light Up the World—both projects were a beginning to creative independence in the indie world.

Released in February, The Baylor Project debuted number one on iTunes Jazz Charts and number eight on Billboard Jazz charts. The response has been a phenomenal new chapter in the Baylor’s lives.

“Not long after we got married, we started working on music together. Marcus was playing around on his drum machine. We put out two indie projects and they weren’t Jazz at all,” said Jean. “Marcus was more on the production element so then he had an idea and said we should do a jazz album. He wanted to play the drums, that is what he loves more between playing and producing. He says, ‘Let’s do something to feature you on vocals and myself on drums to be creatively free.’ I thought it was a dumb idea. [she laughs] You gotta be honest.”

They often laugh and joke with each other and to listen them, they are best friends. The two have similar backgrounds with both growing up in the church.

“We are pastor’s kids,” says Marcus. “I started playing drums at church at the age of 2. Jean was singing in the angel’s choir and got her tail beat by her mom when she acted up. [he laughs] I’m the youngest of nine so my dad was the pastor. I watched my cousin play drums. I was always taught playing drums was a special gift from God. I became the church drummer around the age of 5. One thing about church music that I loved, the mothers made sure you didn’t get too wild or played too loud. My mom would give me that look while I played the dedication. Playing at the tent revivals, choirs and being dedicated—that’s what really created the discipline. You also get the love and passion,” he said.

Marcus, a native of Ferguson, Missouri—a suburb outside of St. Louis, which was the center of racial unrest when Michael Brown lost his life in police custody in 2015. Decades of tensions between the predominately Black community and majority white police department led to days and nights of protests and rioting.

“I heard a quote, ‘If you want to know what African American people are going through, check out the music of that time period.’ I feel like that in some kind of way, our music and sound reflect what we’re dealing with as a people. On our new album, there’s a lot of healing.” He says from the song “Again” deals with healing to “Laughing and Move On” when emotions stir up and aggravate you—sometimes you have to put a smile on your face.

“I’ll always rep St. Louis from day one since I left. In terms of Ferguson, it’s tough because I still have family that lives in Ferguson. It’s a major part of me and that’s where I grew up.”

Jean grew up some 20 minutes outside of Philadelphia. She says, “Growing up, we had one public high school, one private high school, a couple of elementary schools. I lived on the side where all the Black folks lived, although it was a predominately white town—it was still a nice town to live.

She left home to attend Temple University on a Division 1 scholarship to play Lacrosse and later pursuing her life dream of singing professionally.

A great deal has changed since Marcus was a drummer for the Jazz group, Yellowjackets, and Jean as one part of the popular R&B duo, Zhané

on Motown Records. The dichotomy of how records are recorded, and marketed was a new learning curve with new technology dominating the industry. Finding a record company to support their music projects was challenging.

“We were looking at labels but it wasn’t working out. Marcus and I are a lot alike in a lot of ways, our birthdays are six years and a day apart. We’re persistent people, we’re not tripping if somebody isn’t ready to do something. We will find a ‘yes’. Yes, is us creating it and doing it—then we’ll do it. That’s the beauty of growing up and figuring out who you are. Be A Light is our record label,” said Jean.

She said it was challenging to adjust to new recording techniques in the studio.

“It was moving from the old analog system to everything being digitized. That was kind of traumatic. We didn’t get the memo right away. (she laughs) We realized that on the first record.” Moving forward, Jean said, “everything got digitize and it changes the way people function on a day to day level with music.”

On The Journey: The Baylor Project, they decided to not have the album available for streaming because of very small percentage pay-outs to the creators. Although, the album is available on all formats for download—Jean admits the choice is no longer in the hands of the major record companies. “Now, it’s consumer driven where they decide what they want. We decided not to stream this particular album. Everything is so consumer driven—they can decide to buy one or two singles or nothing. They can listen to Spotify—as an artist, you may get 7 cents a song. That’s not sustainable financially.”

From the very beginning of the album’s intro, “Block Party”, that is a cross between church inspired signature sounds, to the elevated drum solo by Marcus, to the beautiful vocals of Jean. It was a labor of love.

“The way we paid for this record, we paid for it out of our pockets but we also did a crowdfunding campaign through Indie Gogo. We needed funds to record the project but it was also about marketing.” The crowding funding project went viral which helped the Baylors to focus on creating the image and packaging for the album. They enlisted the help of photographer, Danika Peniston.  Marcus says Jean worked closely with Danika on scouting locations for the day-long photo shoot for the album. “I just showed up and picked out my clothes,” he said.

Jean says this was part of translating the final vision of the project outside of the studio—scouting out locations for the shoot. “I gave her the concept and we found the sight. We knew we wanted to do it in the church. Danika just took it and ran with it. This album has been our biggest stride as independent artists.”

Check out The Baylor Project at Chicago’s The Promontory on Saturday, June 24. For more information on tickets, click here.