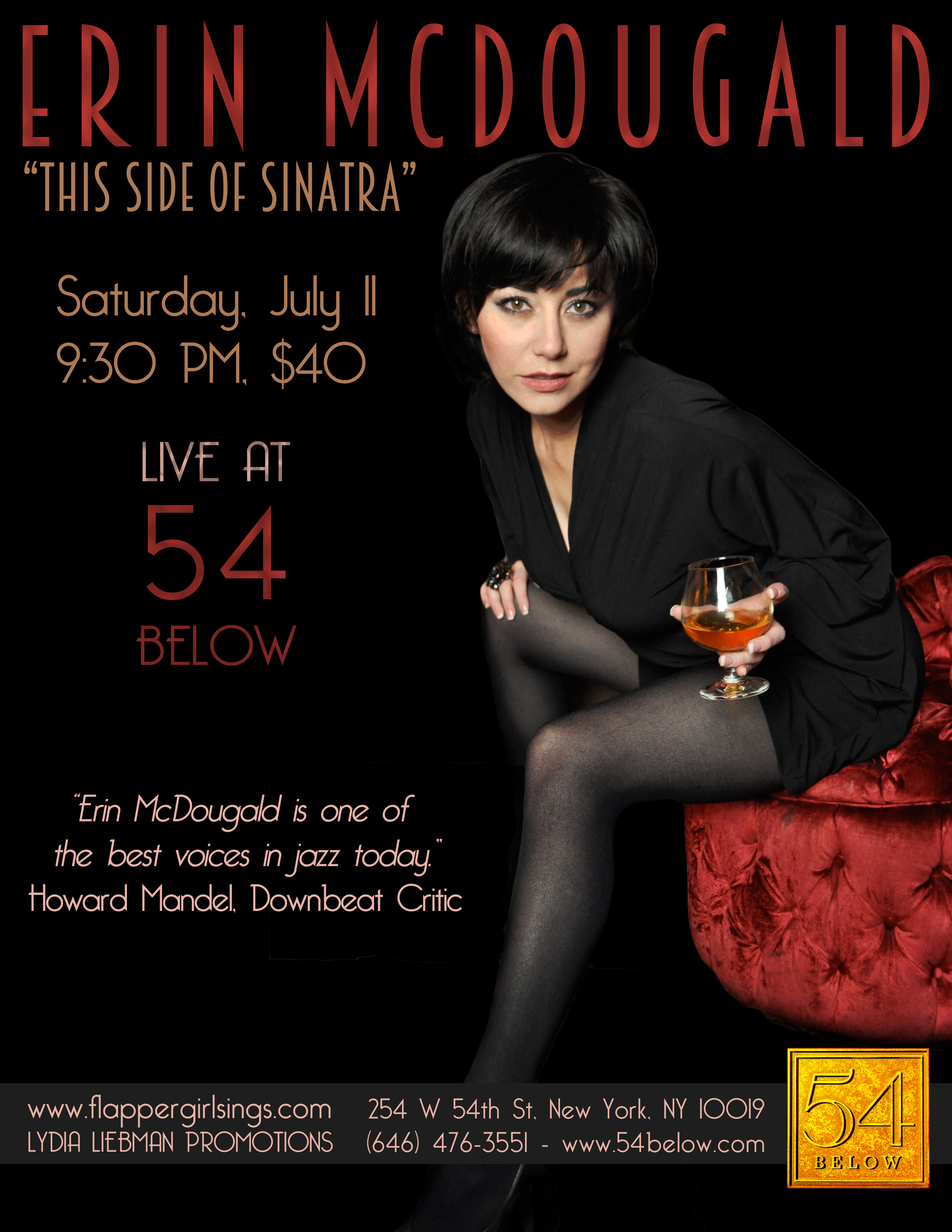 “Erin McDougald is one of the best voices in jazz today.”
– Howard Mandel, Downbeat Magazine

Chicago based vocalist/composer/bandleader Erin McDougald is bi-costal in her club and concert hall appearances, featuring on stage or in the recording studio some of the most prolific names in jazz today. Chicago Music Guide lauds McDougald’s “evocative artistry” which will be prevalent in her July 11th tribute to Frank Sinatra’s Centennial in her concert entitled “This Side of Sinatra” at the famed 54 Below Supper-club in NYC. The concert will present songs Old Blue Eyes made famous with McDougald craftily engaging her own definitive modern jazz elocution. Of note is her hauntingly insightful rendition of “It Was a Very Good Year” and her rhythmically emotive cha-cha infused “Angel Eyes”. Her multi-octave elastic vocal range and chameleon-like phrasing has been praised by Jazz Improv as “a rare instrument to be savored: sweet and spicy in equal measure… worldly, thrilling, [and] positively mercurial”.

MORE ABOUT ERIN MCDOUGALD:
Erin McDougald is a Chicago-based jazz vocalist, bandleader, composer-lyricist and producer. Her company, Flapper Girl Productions, has been in existence since 1999 and served as a recording label for two of McDougald’s albums (Blue Prelude, 2000, and Meeting Place, 2006). McDougald is associated professionally with her innovative arrangements of jazz standards and phrasing which many critics compare to Chicago-born jazz song stylist, the late Anita O’Day. She has produced four critically acclaimed recordings under her lead since 2000, and is the creator the FGP JazzSeries in Chicago, which brings a live audience into a recording studio environment so they may be part of the recording process and part of the actual recording through audience reactions and applause. This idea was developed from James Wagner’s original “Strobe Sessions” in Wicker Park. She has performed live with jazz luminaries Dave Liebman, Nicholas Payton, Ira Sullivan, Rodney Green, Howard Levy, Orlando Sanchez-Soto, Roy Hargrove, Von Freeman, Carlos Henriquez, Harold Maybern and others.

MORE ABOUT 54 BELOW 54 BELOW:
Broadway’s Supper Club, is the new performance venue in the grand tradition of New York City nightlife. A few blocks from the heart of Times Square and just below the legendary Studio 54, 54 BELOW is a classically designed state-of-the art nightclub in the theatre district that hosts audiences with warmth and style. The venue provides a food and beverage menu from early evening through the wee hours of the morning that is worthy of the world class entertainment on the stage. In their description of 54 BELOW, The New York Times writes “the club has the intimacy of a large living room with unimpeded views and impeccable sound; there is not a bad seat. Its sultry afterhours ambience is enhanced by brocade-patterned wall panels planted with orange-shaded lanterns. And the atmosphere is warmer and sexier than in Manhattan’s other major supper clubs.” Located at 254 West 54th Street, 54 BELOW features up to three shows nightly with cover charges ranging from $15- $95.