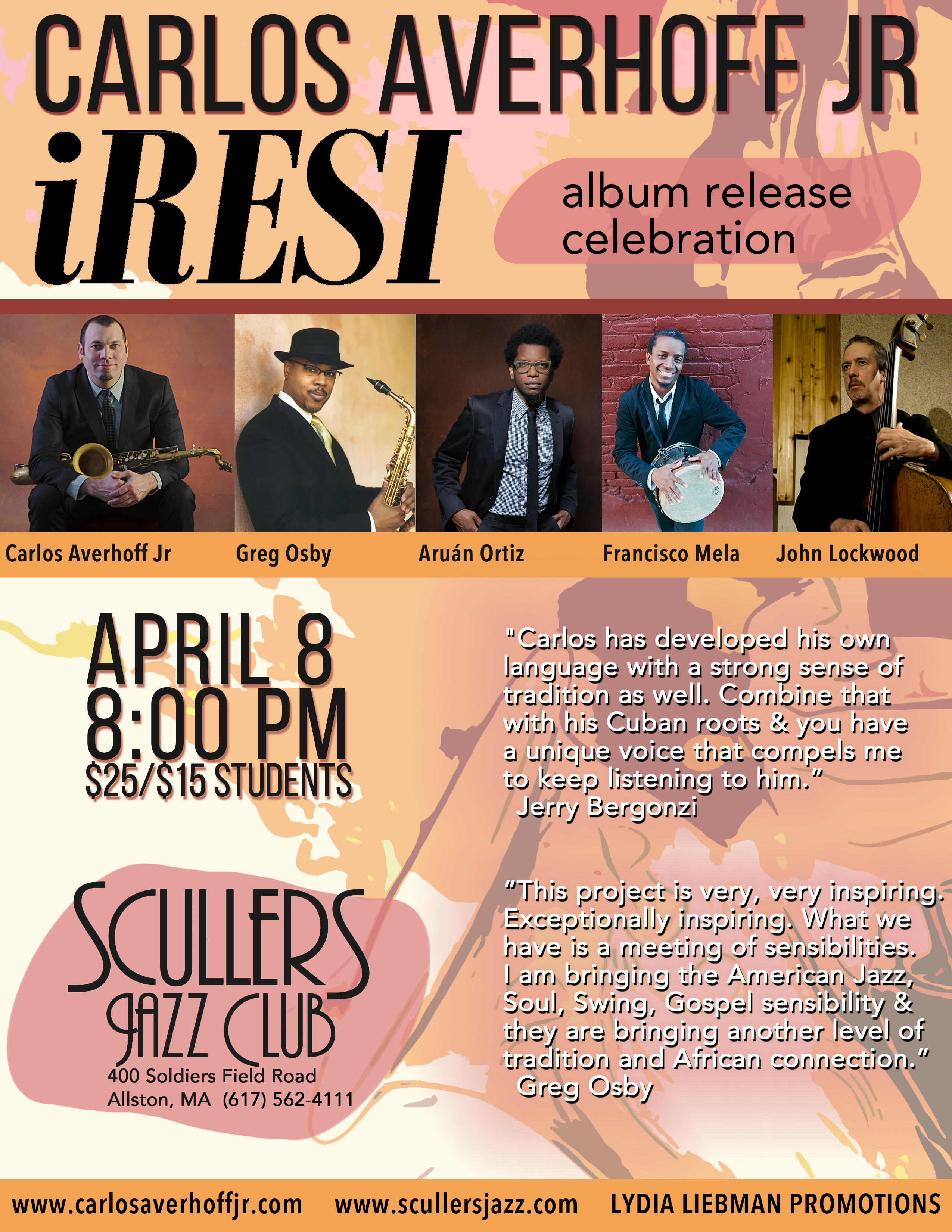 I realized I was part of what promised to be a special evening when I noticed that I was amidst many jazz luminaries (musicians, Berklee professors, radio personalities), all in attendance for Afro-Cuban tenor saxophonist Carlos Averhoff Jr.‘s album release celebration at Scullers. What a celebration it was! There was much joy in the room that night, from the stage as well as from the audience.

Born in Cuba, Carlos graduated from Berklee College of Music and the New England Conservatory of Music and thankfully continues to grace the Boston area with his talent.

I saw Carlos perform with several other bands and knew he was good, but it is with his own music that he truly shines. He was nervous before the show, almost wondering if anyone was going to be in the audience! He need not have worried because the club was nearly (if not) sold out.

Carlos was supported by an incredible band which includes John Lockwood on bass, Greg Osby on alto saxophone, Aruán Ortiz on piano, and Fabio Rojas on drums. All are accomplished musicians who seemed very pleased to share the spotlight with Carlos!

While Carlos’ style may have deep roots in Cuban jazz, he melds contemporary jazz styles with those roots to produce music that is fairly unique. He gives nods to some of the jazz greats he counts among his influences by including riffs of theirs in his songs; two of those were John Coltrane’s ‘A Love Supreme’ and George Gershwin’s ‘Rhapsody in Blue’.

Despite his initial nervousness, Carlos appeared at ease on stage. He announced each song, some with an explanation of the source for the song. One I especially enjoyed is entitled ‘Alina’, although that was not his original title. Alina is his Carlos’ fiancée, and she is as warm and engaging as he. I sense that she will be one of his major influences for many more tunes.

The title of the album, iRESI, is a Yoruba word meaning “the innate light within, our lucky star”. Carlos certainly has much light within him and it shows in his music, his warm personality, and his gratitude. I think there is a lot of music to come from this amazing young musician, and I look forward to being at many more album release shows in the future!

Seeing Carlos at what was possibly his first headlining show, I was reminded of the first time I saw Arturo Sandoval (the incredible Cuban jazz trumpet player) perform at his first performance in the United States after he defected from Cuba. He shared a couple of numbers with Dizzy Gillespie, and I immediately understood that Arturo would become a huge presence on the American jazz scene. I feel the same about Carlos. When he begins touring in support of iRESI, make sure you are in the audience so you can get in on the ground floor of his career. You will not be disappointed.