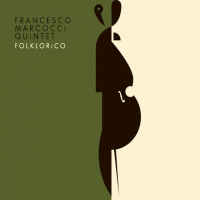 By James Nadal, All About Jazz

If the Mediterranean can be arguably construed as the cradle of civilization, then Italy certainly has a favorable geographical position in this debate, as it protrudes into the middle of the sea. Francesco Marcocci learned the bass in his hometown of Pisa, Italy, and in the process absorbed the rich musical legacies prevalent in the region. His release FOLKORiCO, is an accumulation of influences as vast as the waters which surrounds his homeland and spreads to the ancient beyond.