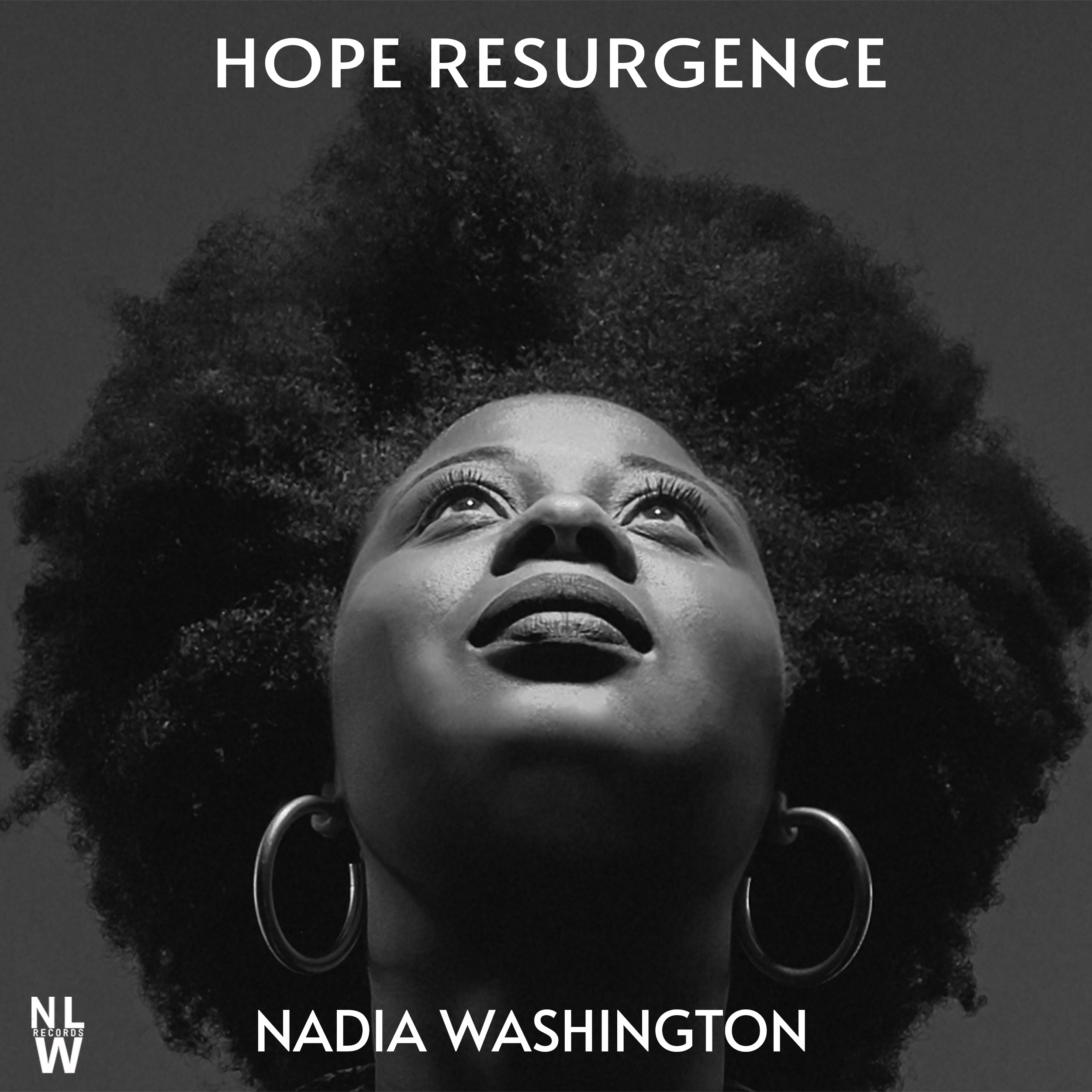 Powerhouse vocalist Nadia Washington makes her debut statement with Hope Resurgence, her new album due out February 24, 2023. Six years in the making, this affirmative nine-track collection finds the seasoned singer demonstrating her multi-instrument proficiencies and savvy vocal stylings amid a fearless and heartfelt multi-genre collective.

Touching on themes of perseverance and faith, Hope Resurgence captures Washington poised and steadfast, leading an impressive roster of respected musical collaborators while the Texas-native divulges in her superb vocal range and dexterity on an array of instruments including acoustic and electric guitars, auxiliary bass and harp, to name a few. Though Hope Resurgence marks Washington’s first release as a leader, the vocalist has been active on the scene and within an array of musical categories, for over a decade. She can be heard among the likes of performers such as Esperanza Spalding, Lalah Hathaway, Dianne Reeves, Terri Lynn Carrington and the late George Duke. Washington has also made acute impressions within the Hip-Hop realm on collaborations with Ray Angry of The Roots, Georgia Anne Muldrow and DJ Mark De Clive-Lowe. Notably, she can be heard on the critically acclaimed 2015 Blue Note and Revive Music recording, Revive Music Presents Supreme Sonacy Vol. 1.

Throughout the development of Hope Resurgence, Nadia relished in the steady process of collaboration. Demonstrating patience and fortitude, she chose to piece together a collection of compositions recorded and conceptualized over the past few years of her life. “I wanted to make sure the music and arrangements reflected my inner growth personally and musically.” The final product encapsulates the grateful spirit and mastery of an artist who opted for repose.

“Every musician here is like a musical family member to me. It was humbling to see how much they respected my vision and contributed their style to the music,” Nadia shares.

Title track “Hope Resurgence” jump starts the record, quickly contextualizing its themes of willingness and reactivation. The interplay between Nadia’s soft vocals and Fischer’s sleek synths set a magical precedent for the tracks to follow. On “Broken”, co-arranger Hari opens with a groovy bass line propelling listeners through Nadia’s soothing appeal on how to move on after heartbreak. With a crawling tempo, “Cyclone,” co-arranged by Payton and Nedoma, is a tune dedicated to mental health awareness. Intermingling solos from Payton complement the track’s cinematic, storytelling quality.

Nabi (Edified) was a sanctified component of Nadia’s upbringing as the daughter of Nelda Washington and niece of Kisha Grandy. Two original members of the legendary choirmaster Kirk Franklin’s choir, “The Family” and established vocalists in their own right, Grady and Washington appear on track “Nabi”, a glistening showcase of Nadia’s roots in gospel and a true family affair. “½ Love” follows, sitting at an eclectic center of Hope Resurgence. Nadia’s hook line “a half love will never do” builds momentum over the course of four minutes, offering a memorandum that the best love anyone can ever learn is, first and foremost, self-love.

Indicated by its name, “Machine”, is perhaps the most idiosyncratic of the bunch, and delves into a rock atmosphere anchored by the rhythm section. The piece, a clarion call to bring an end to inequality and injustice, was written after the murder of George Floyd. Musically, it evokes  the unapologetic protest of Abbey Lincoln while reminiscent of Max Roach‘s “Triptych: Prayer/Protest/Peace” mixed with the psychedelic haze of Jimi Hendrix.

In stark contrast, the record slows down once more with “Bitter Cold”, a chilling solo broadcasting Nadia’s acoustic guitar chops. This tender ballad expresses the vulnerability needed to connect with loved ones who do not find it easy to receive love and connection. “Fire” features spellbinding and trance-inducing synth orchestration from Fischer as Nadia reminds us that “we are reflections of our wildest dreams.” The record finishes with a duo performance from Nadia and Fischer, a stunning and buoyant homage to the Italian opera, “Pagliacci’s Lament.”

“Trust your process,” Nadia shares as she reflects on her culminating endeavor. Nadia Washington’s outstanding message — to remain courageous despite periods of lost faith — is bolstered on this thrilling debut enterprise. Hope Resurgence is a beacon of ambition: miraculous, healing and above all, a reassurance that time can lend a great treasure.

Nadia Washington rises to any occasion as a songwriter, producer, educator and vocalist. Her talent has opened up opportunities to perform with renowned artists in Jazz and R&B including: Esperanza Spalding, Lalah Hathaway, Dianne Reeves, Terri Lynn Carrington and the late George Duke- as well as making an impact with movers and shakers in the Hip Hop World including Ray Angry of the Roots, Georgia Anne Muldrow and Dj Mark De Clive-Lowe.

Born and raised in Dallas, TX, Nadia began showing signs of an entertainer at the age of 3. As far back as she could remember, she was surrounded by some of the premiere musicians of the Dallas Metroplex. Of course one in particular would be her mother, Nelda Washington, who took the hotel bar and lounge circuit by storm in the late 80s and early 90s. Being a single parent, her mother would bring her to the studio sessions and some hotel gigs. This was the beginning of her education. “When I was an infant, I would watch her work intently and would never make a sound. It was mesmerizing to watch my mother perform.”

At the age of 5, Nadia had her first performance at a church that seated five thousand. This was the start of her passion for performing. As she began to really get serious about her craft, her mother would invite her to sing along with on some gigs. Eventually, Nadia began singing with her in studio sessions for clients such as Frito Lay and McDonalds. She has also been involved in numerous studio sessions with various major recording artists like David and Tamela Mann of the new television sitcom “Tyler Perry’s Meet the Browns.”