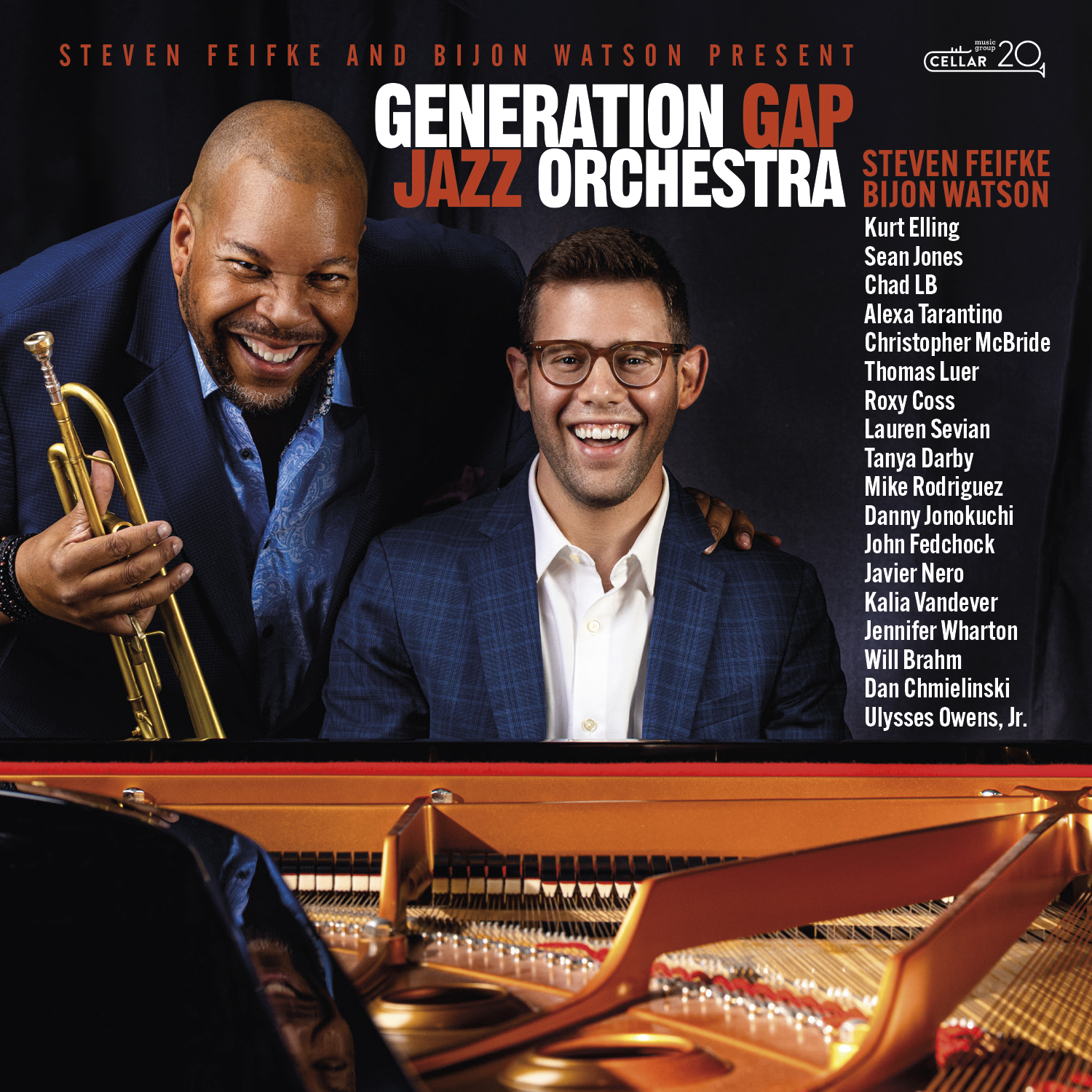 “As to listeners, may they never be too young—or too old—to appreciate high-caliber jazz that swings as hard and as often as this.” – Jack Bowers, All About Jazz

“This recognition gives visibility to the importance of generational diversity and inclusion in the jazz field,” Feifke shares. “I am so thrilled to lead this ensemble and lend a voice to this mission alongside my musical big brother, Bijon Watson.” Watson echoes this sentiment, sharing: “This nomination symbolizes the importance of embracing diversity throughout an ensemble, while also bringing visibility to the mission of promoting inclusion in jazz and arts education as well. It is an incredible honor to be recognized as a leader of this ensemble with my friend, colleague, and brother in music, Steven Feifke.”

Generation Gap Jazz Orchestra features renowned lead trumpeter Bijon Watson whose iconic trumpet sound can be heard in such iconic grammy-nominated ensembles as the Clayton-Hamilton Jazz Orchestra and the John Daversa Progressive Big Band as well as alongside such superstars as Natalie Cole, Michael Buble, and Diana Krall, and can be seen in the award-winning film “La La Land.” Recognized as one of the leading composers for Big Band by the Recording Academy, Steven Feifke is a Yamaha Performing Artist and a two-time semi-finalist in the prestigious Thelonious Monk Jazz Piano Competition. At just 31 years old, Feifke has built an astonishing musical resumé, having appeared on over forty records to date, with DownBeat Magazine calling his music “an air of infectious joy.” His spellbinding 2021 debut record Kinetic received critical acclaim, propelling Feifke’s name among lists of top-tier contemporary big band leaders. This past April, he further cemented that status with the release of an intimate trio release, The Role of the Rhythm Section (★★★★ Downbeat Magazine).

On Generation Gap Jazz Orchestra, a diverse blend of voices comes together to create an overall sound thoughtfully and meticulously sculpted by Feifke’s stellar orchestrations. In the spirit of Art Blakey and Horace Silver, this large ensemble was formed with an emphasis on mentorship – and though there’s two decades between them, Feifke and Watson are like-minded in their approach and perspective. Personnel includes jazz heavyweights Kurt Elling, Ulysses Owens Jr., Mike Rodriguez, Roxy Coss, and more.

Generation Gap Jazz Orchestra marks Watson’s first big band album release as a co-leader and the first recorded collaboration between the two artists, making this recognition all the more exhilarating. This is both Steven and Bijon’s first GRAMMY® nomination, as well as the first for Cellar Music Group.