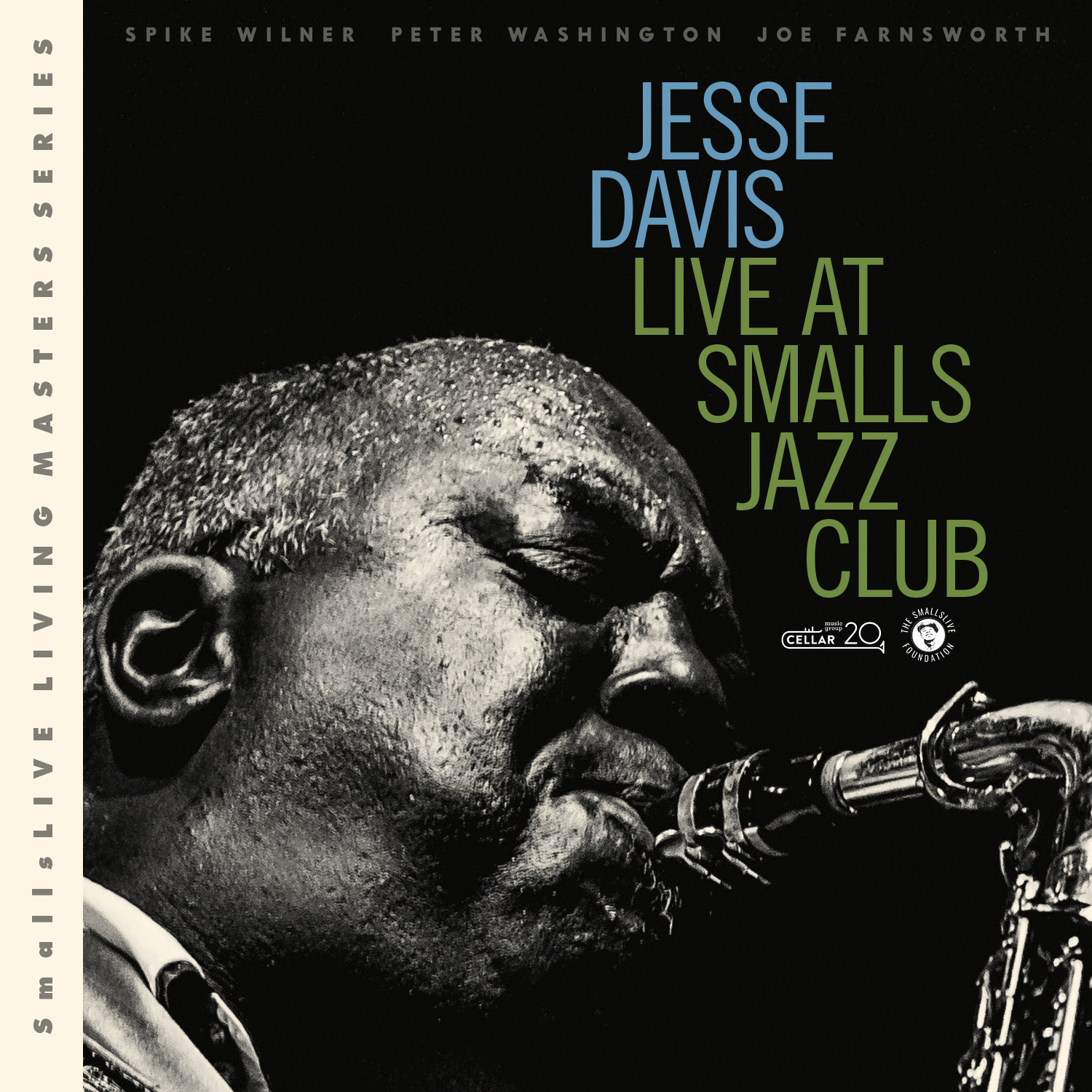 Cellar Music Group and SmallsLIVE Living Masters Series are thrilled to announce the January 27, 2023 release of Jesse Davis Live at Smalls Jazz Club. Alto saxophone great Jesse Davis has been a staple within the jazz community for nearly forty years. Davis’ heartfelt conviction is channeled through his horn with an assertive, fluid tone and a singular sound deeply entrenched in be-bop and the blues, self-described as ‘Neo-Bop’. On this electrifying quartet release, Davis takes the stage at Smalls Jazz Club alongside an all-star rhythm section comprised of bassist Peter Washington, drummer Joe Farnsworth and pianist/producer Spike Wilner.

New Orleans native Jesse Davis honed his craft while studying with Ellis Marsalis at the New Orleans Centre for Creative Arts. Upon his emergence in New York City in the late 1980’s, Davis took the “young lion” movement by storm. As a sideman, Davis cut his teeth alongside such luminaries as Jack McDuff, Cecil Payne, Cedar Walton, Benny Golson, and Wynton Marsalis. The artist went on to record eight critically-acclaimed albums as a bandleader under the Concord Jazz label. Despite decades of stellar creative output, Davis remains a somewhat unsung hero of the alto saxophone, due in part to him living in Italy for nearly twenty years, becoming a staple in the European jazz scene.

Pianist, Smalls Jazz Club owner and producer Spike Wilner reflects: “I first met Jesse in 1989 and we became close friends. Jesse hired me for his band and took over the Friday and Saturday slot at Augie’s (which is now Smoke, the Upper West Side jazz room)… I’d nervously take the train uptown for our gigs and each weekend hang on for dear life. Jesse navigated complex bebop tunes at white-knuckle tempos.  Playing that fast was something I had to learn and was thrown into the deep end of the pool.  Sometimes the tempo was so fast that I was like a deer in the headlights – just stunned, I couldn’t comp or even play a note.  Yet, Jesse believed in me, and we worked together there for more than a year. I can’t think of anyone else currently playing that has the kind of alto sound that Jesse has. He is a master of the horn, a master of rhythm and a master of swing.”

Jesse Davis Live at Smalls Jazz Club is a stunning document of Davis’ ubiquitous return to New York City to bless the harrowed hall of Smalls Jazz Club with the declarative grace – the quiet confidence that his horn imbues. The release features a collection of jazz standards interpreted in a way that only Davis can. Davis gets to the core of each tune and tells its story – and his own, with ease, soul and finesse. With each note expelled from Davis’ horn, one can hear the lineage of jazz running through the player’s heart and soul and into his fingers. This is particularly evident on tracks such as “Gingerbread Boy” and “Juicy Lucy”, on which Davis bares his soul with a tasteful growl and blues-centric bebop language. These tracks are well-supported by the tremendous rhythm section – Washington and Farnsworth lock into a deep swing while Wilner provides the perfect harmonic palette for Davis to paint with sultry melodic refrains. “Rhythm N Ning” and “Love For Sale” are true ensemble pieces – Davis, Wilner and Farnsworth provide fiery solos on the classic Monk composition and the Cole Porter standard – demonstrating the ensemble’s unparalleled interplay.

Ballads like “These Foolish Things” and “Street of Dreams” offer the listener an entirely different side of Davis’ playing, a quiet reflectiveness unabandoned by intention and fervency. Wilner notes “Jesse is really a romantic with an enormous heart.  Jesse’s love for the ballad exposes the tenderness in his soul and he never plays ugly or tastelessly.  He plays with a heart-felt conviction.”

On Jesse Davis Live at Smalls Jazz Club, the saxophonist speaks through his horn with truthfulness, intention and urgency. With his trademark growl and lightning-fast musical reflexes, Davis reasserts his stature here as a prominent force on the alto saxophone, playing with grace and beauty. In the words of Spike Wilner, “Jesse makes his own way, plays his own gigs and keeps his music pure.”