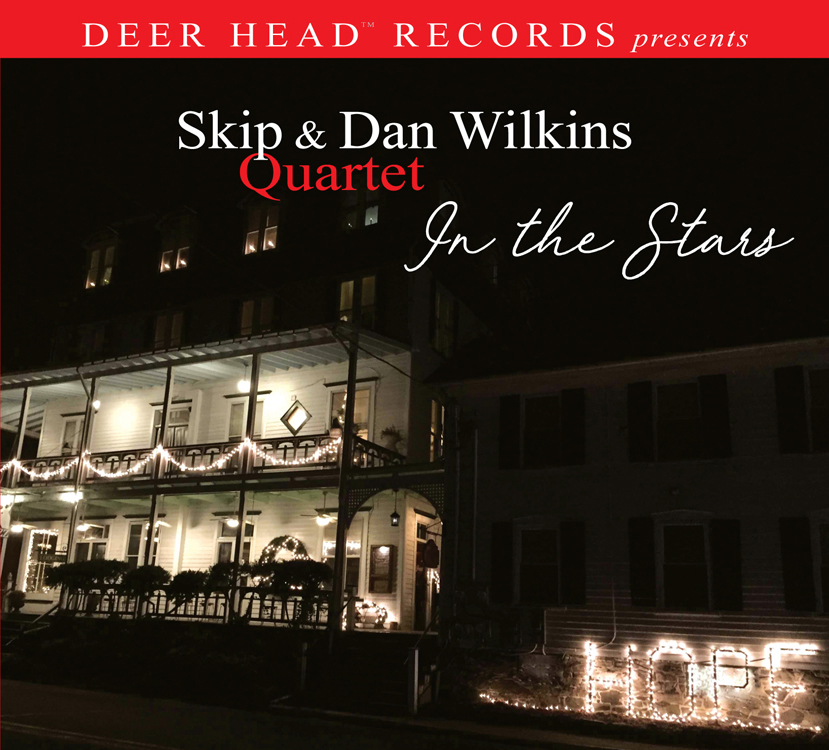 Skip Wilkins Announces the Release of his Spirited New Album In the Stars from his dynamic outfit, The Skip & Dan Wilkins Quartet, out November 18 on Deer Head Records

Veteran pianist and composer Skip Wilkins is thrilled to announce the release of In the Stars, his upcoming release with his long-standing jazz quartet the Skip & Dan Wilkins Quartet. To be released November 18, 2022 on Deer Head Records, the album draws inspiration from Skip’s period of Covid-19 isolation, and rejoices in the ability to gather together once more in creation of beautiful moments of music-making. In the Stars presents audiences with recordings of stellar arrangements and performances of Great American Songbook compositions that have, until now, largely been lost to the sands of time. The album is dedicated to the great NEA Jazz Master Phil Woods whom Skip had the opportunity to play with frequently and for many years as a member of the Festival Orchestra. The album features Skip alongside his son, celebrated tenor saxophonist Dan Wilkins and Wilkins’ stalwart rhythm section made up of bassist Tony Marino and drummer Bill Goodwin.

For 14 months in 2020 – 2021, Skip Wilkins found himself in the midst of Covid-19-imposed lockdown at his home in the Delaware Water Gap. Wilkins’ unlikely living situation (atop the historic Deer Head Inn, the oldest running jazz club in the country – which Wilkins refers to as his ‘living room’) served as a constant reminder of the state of the live-music landscape. With the dormant venue beneath his feet, Wilkins was left with nothing-but free time to ruminate on his illustrious musical past, including fourteen previous CD releases as a leader or co-leader, decades of U.S. performances, and years of steady touring throughout Europe, along with his most recent venture – a joyous quartet recording alongside his son and his long-time rhythm section which was set to be released later that year in 2020. Wilkins made the decision to delay the release of In the Stars until a time when we can gather again to celebrate the joys of live music. That time is here, and in the words of Wilkins, “It’s great to be back.”

The notion of breathing new life to underappreciated yet classic songs is nothing new for Wilkins, as the pianist indicates: “…truthfully, it is one that has consumed me since I was a little boy, before I could ever have comprehended the future scope and trajectory of my life and career.  It has been In the Stars for a very long time.  During the last decade, I have found special delight in unearthing new-old material that isn’t being played and recorded constantly.” During the lockdown, Wilkins added hundreds of new songs to his collection. “It is my life-long pursuit.  There’s so much great music out there, and our quartet loves exploring the many gems of this repertoire.”

In the Stars captures four true innovators at their musical peak lending their singular voices to seldom-performed compositions by classic composers such as Hoagie Carmichael, Johnny Mercer, Kurt Weill, Antônio Carlos Jobim and George Gershwin. Here the bandmates display a level of trust and interplay that only comes from years of collaboration. Particularly evident in tracks such as “I Walk With Music”, “Brigas Nunca Mais”, “I’m Making Believe” and “Why Do I Love You”, Dan Wilkins’ stellar horn lines soar atop Skip Wilkins’ supple pianistic refrains and are well supported by the deeply swinging grooves provided by the rhythm section. Skip Wilkins’ incredible improvisational prowess is displayed throughout, and is in full force on tracks such as “Lost In The Stars”, “I’ll Never Smile Again”, “Sweet Georgie Fame”, and “I’m Making Believe”.

Skip Wilkins notes “It is an uncommon thrill to work on music with my son Dan, whose musical maturity was frighteningly obvious long ago. Not many people get to do creative professional work with their children and I am grateful for it every day. And it’s great to record again and again with Tony Marino.” In The Stars is Skip Wilkins’ sixth outing with Tony Marino, and the latest collaboration with the venerable Bill Goodwin, who Skip regards as “the mentor [he] needed at this time in [his] life. In The Stars follows the 2019 release of the Skip & Dan Wilkins Quartet’s Someday, which Making A Scene’s Jim Hynes called “​​authentic, tried and true jazz.”