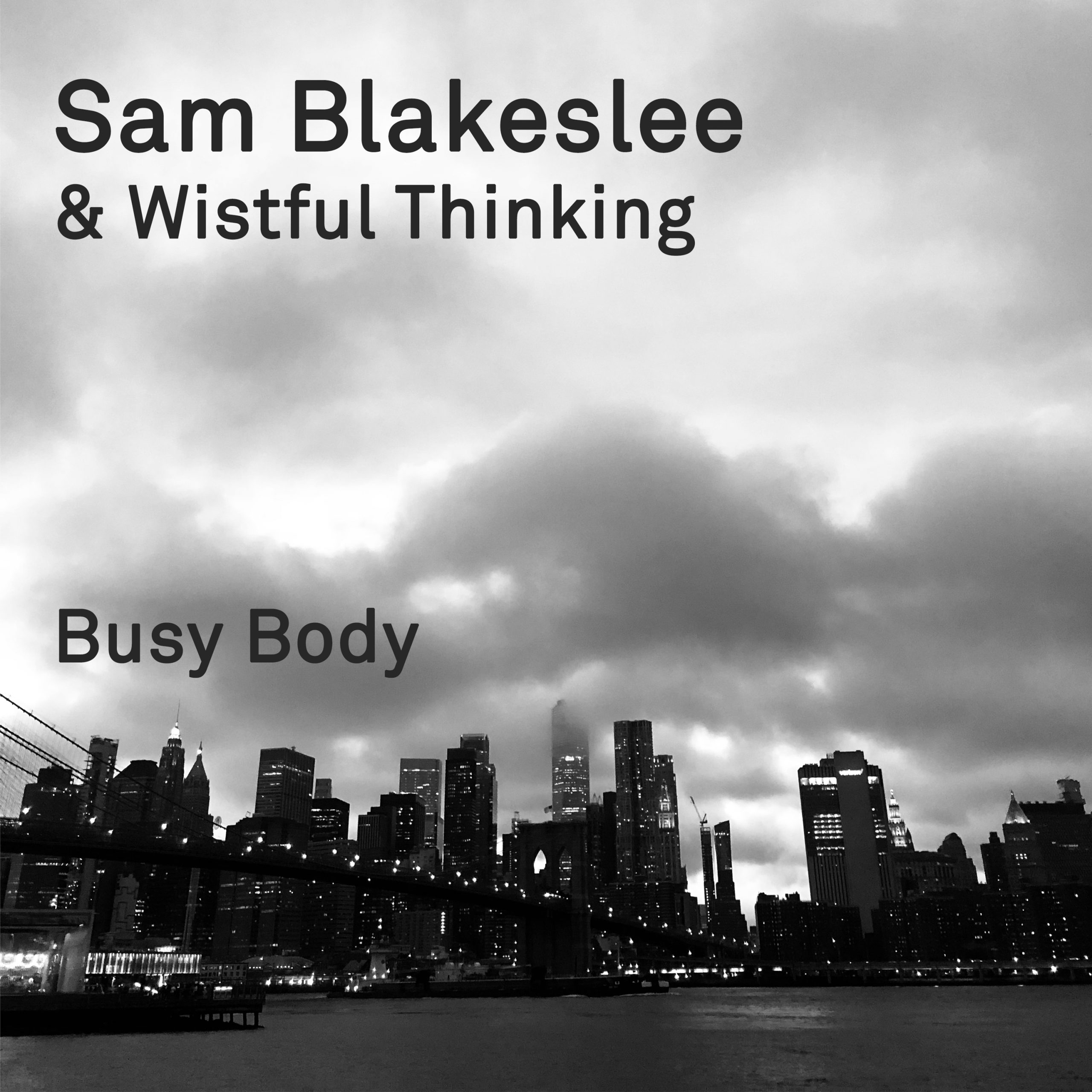 Sam Blakeslee and Wistful Thinking issue Busy Body, an audacious sophomore foray into electronic fusion due out October 28, 2022 via Outside in Music

“Composer, Sam Blakeslee, is a name to keep in mind as an upcoming creative, contemporary, and, more importantly, engaging composer, no matter the musical setting.” – Rufus Reid

Outside in Music is thrilled to announce the October 28, 2022 release of Busy Body, the sophomore album from steadfast New York-based composer and trombonist Sam Blakeslee and his synergetic ensemble Wistful Thinking. Following their 2021 debut The Long Middle, Blakeslee’s intimate, pastoral first statement conceptualized and released mid-pandemic, Busy Body builds beyond the bandleader’s chamber-jazz setting and finds asylum in a realm between fusion and electronica. Soaring through compositions wrought by electronic manipulations and ambient sonic landscapes, Busy Body takes on an entirely fresh framework for this exploratory band, yet Blakeslee’s profound ability to resonate thoughts through sound remains eminent on this far-reaching statement.

“Leading up to this point, I was writing a great deal for the big band medium. However, with no safe situations for big band performances in the near future, turning to electronic production gave me the timbral contrast that has always drawn me to composing for large ensembles. All of a sudden, I felt like I had an orchestra at my fingertips,” Blakeslee shares, discussing the impetus behind his divergent discography, both pieces of which sprung forth over the course of the pandemic to “fill a void”, as he describes. “Delving into the vast world of electronic production was a way to cope with the uncertainty of 2020.”

While immersing himself into this new world and consequently taking the back seat as an instrumentalist, Blakeslee’s reverence for psychedelic rock came to the surface. He cites classic albums of the genre with similar post-production aesthetics — Jimi Hendrix’s Axis: Bold As Love as well as the output from The Beatles in the 1960s — as sources of his fascination. Tracks “Busy Body” and “Wistful Thinking”, where master percussionist Haddad contributes an assembly of stunning sound layers, both capture that setting perfectly, while the second track “Hollandaise Sauce” featuring GRAMMY-nominated drummer and composer Pugach is an ode to the 16-bit video games and fusion sounds of the ‘90s.

Though at this point, Busy Body might present as a complete departure from the bandleader’s melancholic debut, elements of wistfulness are quite literally dusted throughout; an eclectic introduction of tracks land the listener amid “Wistful Thinking”, a crawling radius anchored by Blakeslee’s horn met by a sweltering solo from Coles. The combination of back-to-back blows translate a mellow, forlorn sound into a gentle reminder that Blakeslee’s compositional ethos is still rooted speculation, though he does not keep us there for long.

The frenetic “Klepto” ensues, entering the domain of prog-rock where a trombone choir meets metal band, thanks to producer and guitarist on the record Coleman who acquainted Blakeslee with the style. Shifting from a fast-changing tempo, Blakeslee’s muted solo on the brief “Little Song Diary Part I” interlude warns of another forthcoming change. The pair of Little Song Diaries pad the ensemble’s succinct reconnaissance of dreamlike, ambient landscapes in “What Was” and “Crushed Life,” both soaked in lush contributions from Wiles on moog and layered with textured synth orchestration.

Sam Blakeslee scintillates across extensive musical territory on his sophomore outing, a consummate, 10-track deliverance of original and genre-bending material. A record fashioned by adventurous, contemporary compositions, Busy Body flies through the inner workings of a rich and experimental musical mind. Where Wistful Thinking might take us next remains ambiguous, but the question of when ‘next’ is, exactly, will surely strike listeners at the close of Busy Body, achieving just what this band’s namesake evokes: a sense of longing.

Originally from Columbus, Ohio, award-winning trombonist Sam Blakeslee has made a significant name for himself in New York City, where he has lived since 2017. Over the past five years, Blakeslee has developed a solid reputation as a “first call” player, notably with several high-profile large ensemble groups including the Dan Pugach Nonet, Manuel Valera’s New Cuban Express Big Band, New Alchemy Jazz Orchestra, Terraza Big Band, Remy Le Boeuf’s Assembly of Shadows, Big Heart Machine, Emilio Solla’s Tango Jazz Orchestra, and the New York Afro-Bop Alliance Big Band, among others. He has shared the stage with a plethora of top-notch jazz icons ranging from Joe Lovano and Sean Jones to John Clayton and Dominick Farinacci, and regularly performs at top tier venues around the city. Sam has also performed at multiple jazz festivals across the world such as the Fano Jazz Festival,Mosciano San Angelo Jazz Festival, and Parma Jazz Festival in Italy as well as the Deutsche Musikfest in Chemnitz, Germany.

In addition to his latest endeavor Wistful Thinking, Sam is also active as a big band composer, and since September 2019, he has been a member of the BMI Jazz Composers Workshop in NYC under the direction of Andy Farber and Alan Ferber. Sam also leads the “Sam Blakeslee Large Group” which is a 17-piece contemporary jazz orchestra that features original compositions and arrangements in a variety of styles and moods.