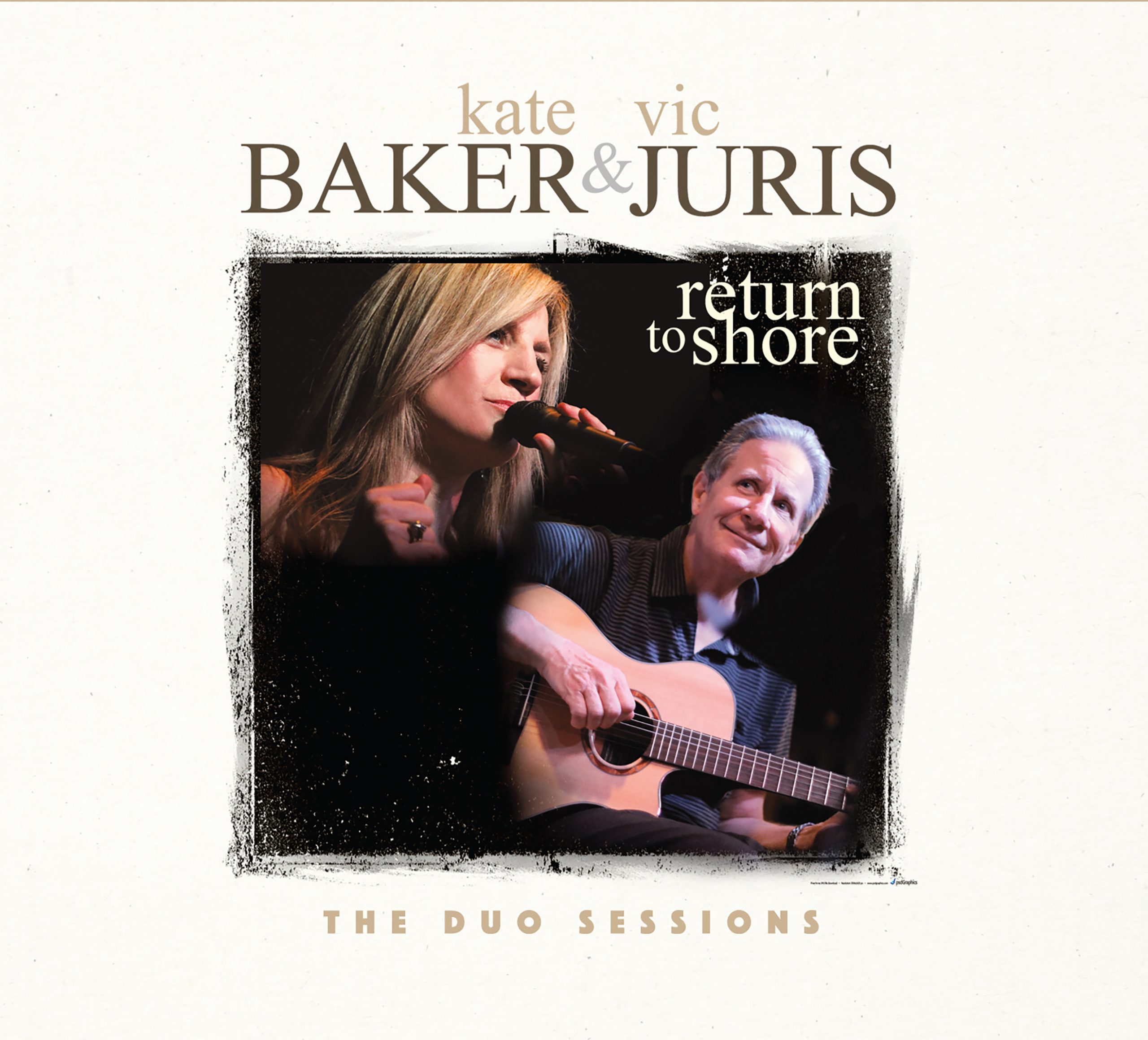 First single, “God Only Knows” is out September 23, in connection with Vic’s September 26th Birthday

“This recording is a masterpiece on so many levels..touching, reflective, lyrical and above all musical qualities. This is a recording with love and mutual respect ringing clear as a bell, infused with many deep musical and life qualities. Kate’s emotional vocabulary is striking, nuanced and bold. We all miss Vic….however this recording leaves testimony to the love that permeates the music. Rest in peace Victor,” -Dave Liebman

“The world of music was devastated by the loss of Vic Juris, but here he leaves us a most beautiful calling card – something to ease our own pain and cause us to smile with wonder at his incredible guitar work,” – Joe Locke

“Return To Shore, the impossibly tender duo offering from vocalist Kate Baker and recently passed guitar icon Vic Juris has the gravitas of a musical love story 25 years in the making.  We’re privy to an intimate conversation between consummate artists as they write a final chapter together – an ode to each other and to the music they both created and loved. Heartrending and transcendent,” – Kate McGarry

Celebrated vocalist Kate Baker and her late husband, guitar giant and influential educator Vic Juris, chronicle a moving love story on Return to Shore, their evocative new album due to be released on October 7, 2022. Produced by guitar great Dave Stryker, Return to Shore displays some of Juris’ most innovative guitarwork to date while showcasing Baker’s formidable skills as a singing storyteller. Featuring expressive renditions of jazz and pop music selections, as well as a collection of original compositions, Return to Shore is a stunning recorded document of tender connection and supreme musical synergy.

The origin story of Return to Shore began several years prior to Juris’ untimely passing nearly three years ago, when the husband and wife duo entered engineer Paul Wickliffe’s recording studio to track six of the ten songs that comprise this heartfelt release in early 2019. “We’d been performing as a duo together for about twenty years, and we knew what it felt like live, when the energy from the audience – the applause, the love – became so much a part of the process – we wanted to get a feel of what it actually sounded like,” Baker indicated. Over the next few years, Baker and Juris “tried out new material in our home studio to see what it would sound like, not thinking we’d use it,” as Baker noted.

In late December 2019, Juris passed away after a relatively brief but valiant battle with nuero-endocrine cancer. His untimely death at age 66 gave way to a crater in the music community. For over forty years, Juris’ wide-ranging stylistic breadth and technical fluency made him a first-call sideman, and a true “musicians musician” in every sense of the phrase. While he had several important musical partnerships throughout his career, including a 20-year tenure in saxophonist Dave Liebman’s band, among the most meaningful of his collaborations was the duo he had with Baker.

Baker, a skilled vocalist whose impact on the contemporary music scene, especially as an educator and vocal coach, cannot be overstated, was the perfect foil to Juris’ distinctive playing. They performed together often and their uncommon musical symbiosis left audiences floored. Despite their frequent live appearances, the duo never released an album together. Perhaps even more surprisingly, Baker had never issued a formal recorded debut. When Juris passed, the recordings from earlier that year took on new significance, and with Dave Stryker’s help, Baker wanted to deliver one last document of her late husband’s work to the world. The results are revelatory and cathartic.

“When we were thinking about songs to do, we wanted to do all new tunes – there was no theme,” reflects Baker. “But in reality, the theme was there all along. But neither of us knew what was coming. I think the spiritual world was giving us a message.”

This is evident from the opening track, “God Only Knows”. Baker shares that after a home recording session of the tune (one that they did not usually perform, but felt compelled to that day) Juris felt unusually fatigued. After a visit to the doctor, the worst had been confirmed: Vic had cancer, and the prognosis was not good. Suddenly, their lives changed in an instant, bringing a new significance to the Brian Wilson tune. The title track, “Return To Shore”, first came on Baker’s radar when she heard Juris perform this in duo with Larry Coryell. Struck by the beauty of the tune, she wrote original lyrics and a shout chorus. “I’ve Grown Accustomed to His Face”, the Lerner and Loewe standard made famous by the 1960’s Broadway show My Fair Lady, was a frequent vehicle for the duo. “I was always so special as it was an anthem about our marriage… I would sing it to Vic on all our performances,” Baker reflects. On this rendition, Baker and Juris’ remarkable connection, musical and personal, shines through.

“Black Crow” is the first of two Joni Mitchell songs that make an appearance on Return to Shore. A favorite to perform live, “Black Crow” showcases Vic’s singular playing on the Martin guitar, and together they transform this well-loved Mitchell composition into something entirely new. Following is an intimate take on Jimmy Webb’s “The Moon Is A Harsh Mistress”, followed by another Juris-Baker original, “Moonscape”. This one was always one of Baker’s favorite Juris-penned compositions, and the original lyrics flowed naturally. “There was something about the moon that would always take my breath away when I was young and it would give me hope,” she says.

The Ivan Lins-penned “Madalena”, made famous by Elis Regina, comes next. Another live favorite, this one would always go to new places at every performance, keeping in line with Juris’ intention to keep things fresh, and never play the same thing twice. The second Joni Mitchell offering is the enduring “Both Sides Now”, which here takes on an entirely new perspective. “This is the song I will remember to the end of my time on earth,” declares Baker. She recalls performing this together on one of the last gigs before he passed, and deeply feeling their intense and intimate connection. “There was no fear and no ego… just a totally pure connection to my husband. Through this process, sometimes the music could speak stronger than words.”

The final two selections are incredibly meaningful for Baker: Alec Wilder’s “Blackberry Winter”, a performance staple that has become sort of a signature song for the vocalist, and “Are You Kind” – an original composition composed by Baker and her dear friend Shari Miller. Originally written for her father, who passed at age 55, this cathartic tune took on new significance upon Vic’s passing. It ends the album on a hopeful and uplifting note. She reflects:

“First the song asks questions: ‘do you feel love? Do you feel pain?’ and so on. But at the end, it’s about the lessons learned: ‘now I feel love, now I feel pain, now I feel the life pulse through my veins. I walk in grace, I walk that line, I take the time to be kind, I try to be kind.”

With Return to Shore, Kate Baker and Dave Stryker (who was not only Juris’ peer and labelmater, but next door neighbor and close confidant) present a wide-ranging final document of the late Vic Juris that is both emotionally tender, and musically arresting. While Vic Juris may no longer be with us physically, his legacy remains firmly intact on this essential final recording that is, above all things, about love.

“One of the most impressive performers to come along in years,” (Los Angeles Times), much in-demand vocalist, Kate Baker is a heartfelt interpreter of lyrics with “an unmistakably original voice that is smooth and hypnotic” (Boston Globe), resonating with her love of diverse musical inspirations.

A musician’s singer with a high level of musicianship, she regularly performs in a variety of settings from duo to small ensemble to big band. For the past two decades she has been exciting audiences worldwide with a voice that bassist Harvie S. calls “beautiful and authentic,” and pianist Rachel Z. Hakim calls “irresistibly engaging and intimate … reflecting a lifetime of experiences of love, loss, and hope, and deftly showing her courageous spirit.” As a vocalist, she has performed at venues and festivals all over the world. ​​

Widely acknowledged as a master in vocal pedagogy (she also has a special program to train voice teachers), Ms. Baker’s teaching style is an accumulation of over 25 years training and performance.  Presently, Ms. Baker teaches privately and is on the faculty of the New School University of Jazz and Contemporary Music. She has conducted master classes at major institutions throughout the United States and Europe, including co-leading many master classes with singing legends Sheila Jordan and Mark Murphy, and presenting workshops on “The Art of the Duo” with Vic Juris. In addition, she is also known as a vocal producer in New York and Los Angeles.

Victor Edward Jurusz Jr., known professionally as Vic Juris, was an American jazz guitarist. At 11, he studied guitar at the home of his teacher, Ed Berg, and got interested in jazz listening to Berg’s records of guitarists Django Reinhardt, Jim Hall, Barney Kessel, Jimmy Raney, and Johnny Smith. In his teens he played the rock music of the 1960s. When he was 19, he met blind saxophonist Eric Kloss and they became friends. He made his first recording on Kloss’s album Bodies’ Warmth (Muse, 1975). Around the same time, he met guitarist Pat Martino, who became a friend and mentor.

Juris recorded with Richie Cole during 1976–78 and released his debut album as a leader, Road Song, in 1979. In the early 1980s, he turned to acoustic guitar in duos with Larry Coryell and Biréli Lagrène, and in the late 1980s he worked with Gary Peacock‘s band. Since 1991 he spent much of his career with saxophonist Dave Liebman.

Juris taught at The New School for Jazz and Contemporary Music, Lehigh University, and Rutgers University and wrote instructional books for guitar.