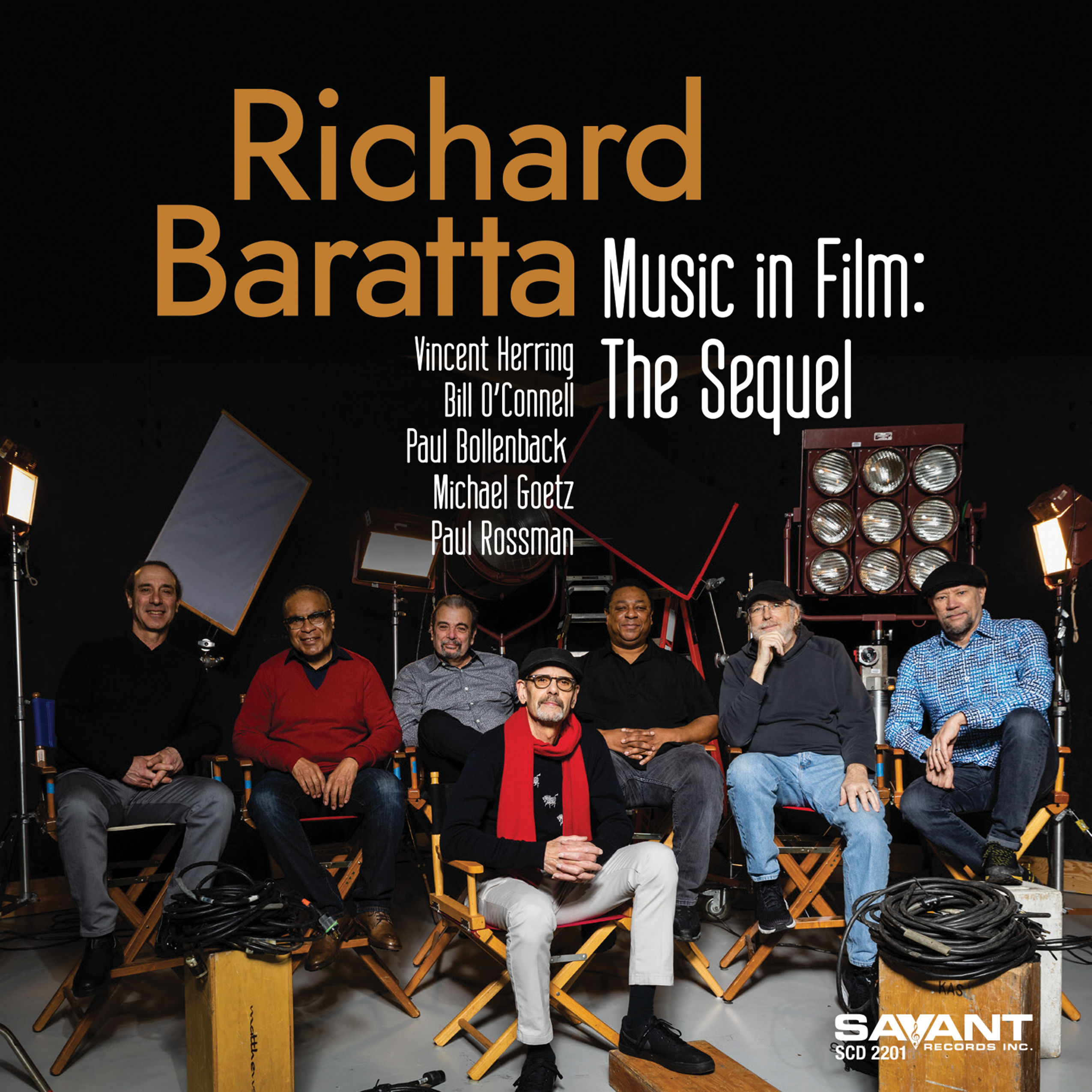 Drummer and Film Producer Richard Baratta Returns with Sophomore Studio Album Music In Film: The Sequel, to be released on September 9, 2022 via Savant

Savant Records is thrilled to announce the September 9, 2022 release of drummer Richard Baratta’s sophomore studio album Music in Film: The Sequel. A follow up to his 2020 studio debut Music in Film: The Reel Deal, which went on to earn a GRAMMY nomination for arranger and pianist Bill O’Connell and racked up over 3,000,000 streams on Spotify, Baratta’s latest once again fuses the worlds of cinema and jazz in a way that is decidedly modern and fresh. With Baratta at the helm in the drum chair, O’Connell returns as pianist and arranger alongside jazz heavyweights Vincent Herring (alto saxophone), Paul Bollenback (guitar), Michael Goetz (bass) and Paul Rossman (percussion). Over the course of 11 tracks, this top-tier ensemble gives award-worthy treatments to familiar melodies from Austin Powers, Star Wars, Willy Wonka and the Chocolate Factory and more.

Prior to 2020, Richard Baratta was known primarily as a successful film producer. He has dozens of films under his belt, including six Spider Man installments, The Wolf of Wall Street, The Irishman, and countless others. But In the 1970’s, Baratta was a young drummer on the New York City loft scene, performing with the likes of John Stubblefield, Vernon Reid and Hal Galper. Living from gig to gig had its moments, but when the opportunity came in 1984 to get into the film industry (as a location scout for Desperately Seeking Susan), the financial security was hard to pass up. His career in film flourished, and to date he has dozens of famous movie titles to his credit.

Even when fully-immersed in the film world, Baratta’s first love for jazz never dwindled. In 2020, Baratta decided to formally re-enter the jazz world with the release of Music in Film: The Reel Deal. Baratta and band’s take on movie-music classics like “Alfie”, “Chopsticks” and “Peter Gunn” propelled the album to soaring heights, including to a GRAMMY nomination for O’Connell in the Instrumental Arrangement category for “Chopsticks”. “Alfie” and “Peter Gunn” were certified hits on streaming services, with especially impressive streaming numbers on Spotify and Amazon. The album received rounds of praise, and the fall edition of Jazziz Magazine that year featured Baratta in a glossy spread.

With all the accolades, a sequel was inevitable. Soon after the first album wrapped, Baratta and the group were right back in the studio for round two – and the results were glistening and varied. There’s the Latin-tinged “Itsy Bitsy Spider”, which first appeared in Mike Nichols’ Heartburn (one of Baratta’s first big productions), on which solos from Bollenback and Herring dazzle, and “Soul Bossa Nova” from the Austin Powers franchise. On this mid-tempo cha-cha, the solos by O’Connell, Baratta and Rossman play up the Afro-Cuban element while Herring’s solo reminds listeners that this Quincy Jones tune is also a blues.

Another selection that draws from Baratta’s rich film background is Henry Mancini’s “Theme from The Pink Panther” (Baratta worked on the 2006 reboot). This one is a hard-charging swing, with Baratta’s solo really cutting loose. A veteran of Gato Barbieri’s band, O’Connell suggested the saxophonist’s stirring theme from “Last Tango in Paris,” here rendered in 5/4 time.  Bollenback, Herring, and O’Connell take monster turns in the spotlight, but keep one ear on Baratta and Rossman’s accompaniment as they chew the odd meter to bits.

Baratta’s selected the title track of the 1945 comedy Out of This World because the John Coltrane Quartet’s 1962 rendition of the tune was his “gateway to jazz”. His rendition offers a different take with its otherworldly guitar lines, though Baratta certainly takes some cues from Elvin Jones, notably in his stickwork. The dreamy “Pure Imagination” slows things down tenderly, and things kick up again with the straight-ahead shuffle “You’ve Got a Friend in Me”, Randy Newman’s theme from Toy Story. Sure-to-please tracks include the fun “Cantina Band” from the Star Wars megaverse which showcases a gleeful duel between Bollenback and Herring, and the New Orleans-style twist on the traditional “Man of Constant Sorrow”, which features on one of Baratta’s favorite films, O Brother, Where Art Thou. The trio treatment of Charlie Chaplin’s “Smile” (included here because it’s in Joker, another film Baratta notably worked on) is a high point, before jaunting into “Volley for Jabali”, written by Baratta himself and the only original composition here, written as a tribute to NEA Jazz Master drummer Billy ‘Jabali’ Hart.

While the album closer hints that Baratta may take on more original music next time around, the drummer-producer is already picking out the next cinema-centric tunes to make it a trilogy. Until then, film buffs and jazz lovers alike can rejoice with Music in Film: The Sequel, which is sure to be another blockbuster.