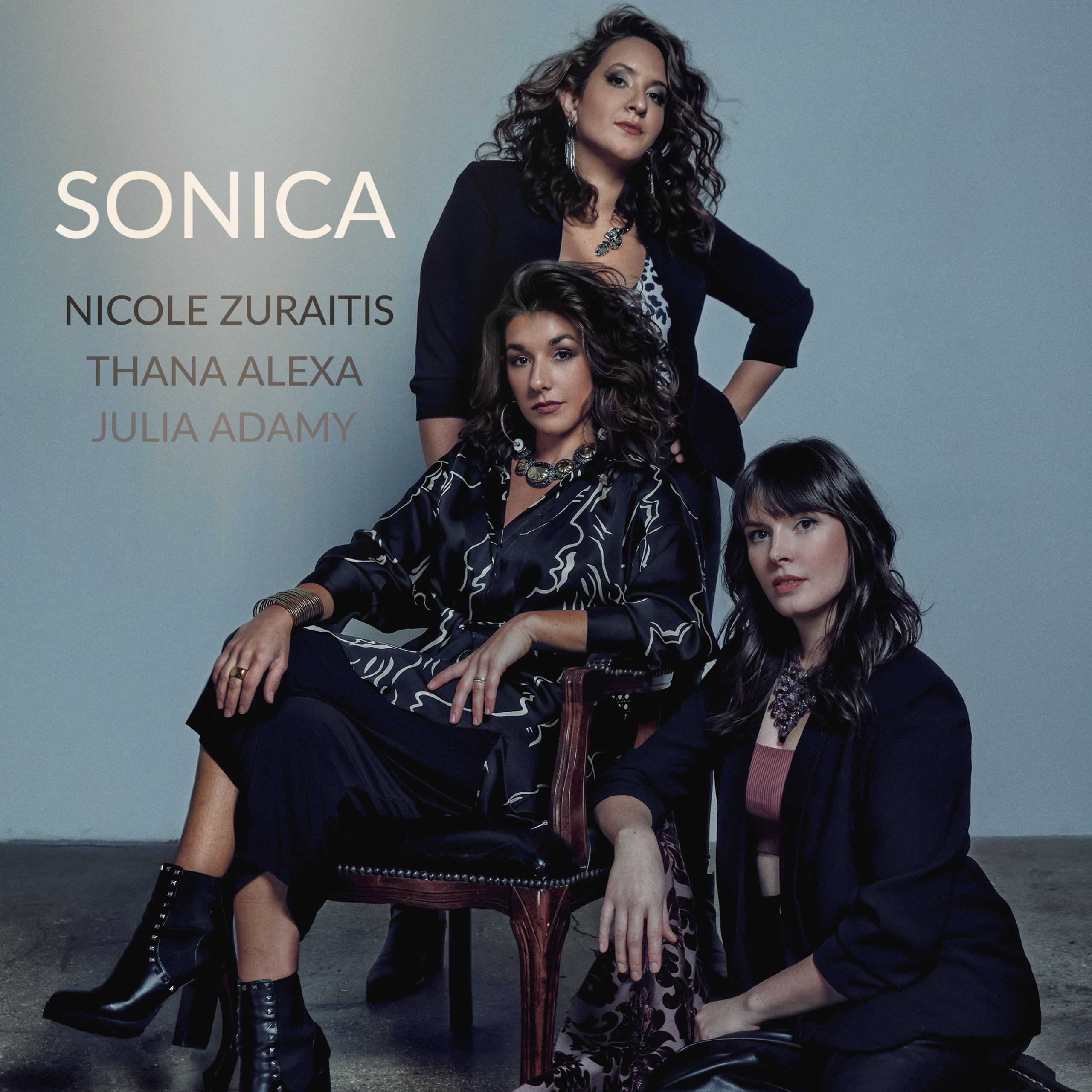 Thana Alexa, Nicole Zuraitis and Julia Adamy Deliver Soulful Messages of Tenacity on Self-Titled Debut Album SONICA, due out September 30, 2022 via Outside in Music

SONICA, a dynamic trio featuring three of today’s most distinctive contemporary female musicians, includes GRAMMY-nominated vocalists Thana Alexa, Nicole Zuraitis and renowned first-call bassist Julia Adamy. The trio’s self-titled debut album is imbued with a sharp and unrivaled sonic power, capturing the allure of female collaboration over seven genre-bending compositions and arrangements. Fully engineered, produced and mixed by Thana Alexa, SONICA is due out on September 30, 2022 via Outside In Music.

SONICA incorporates intricate vocal harmonies, electronics, vocal loops, percussion, electric bass and keyboards over a blend of original music and modern arrangements. Fusing jazz with elements of pop, soul and folk, the trio captivates audiences with each of its member’s unique ability to redefine American music. What started as a passion project on the heels of the 2020 Coronavirus pandemic launched into a debut production recorded and produced straight out of Alexa’s home studio in Queens. After forging a deep musical connection throughout years of collaborative performances, the three decided to unite on tape and document their musical connection with this recording.

Commencing fiercely with “Doyenne,” the French term for a woman who is the most respected or prominent person in a particular field, SONICA introduces their first collaborative compositional effort. In the spirit of Alexa’s personal mission to highlight sisterhood and the momentus drive that exists in the female spirit throughout her body of work, “Doyenne” includes a spoken word excerpt from a recording of women’s rights activist and abolitionist Sojourner Truth’s famous 1851 speech “Ain’t I A Woman” as well as the voices of feminist activist Gloria Steinem and Pakistani female education activist Malala Yousafzai. The associated music video, directed by Adamy’s brother, Wil Adamy, features three young female dancers who express feminine freedom, individuality and sisterhood through improvised movement.

Punctuated by the funky drumming of Adamy’s husband, special guest Ross Pederson, “Where Ya Gonna Go” was born from a simple groove recorded by Adamy and Pederson at the beginning of the 2020 lockdown. All married to drummers, SONICA built the groove into a full fledged song, the lyrics and melody of which provided some comedic relief to the circumstances of musicians and partners alike struggling in confinement.

Melding an ethereal three part harmony with purposely simplified piano and bass, Zuraitis’ arrangement of Bon Iver’s “Michicant” sets a melancholic tone, painting images that surrender to the uncontrollable and accept the imperfect for a contrastingly somber musical atmosphere.

“Michicant” is followed by a Zuraitis-original, “Come A Long Way,” telling the story of a child whose continued personal, behavioral and scholarly struggles become exacerbated from pandemic isolation. Maintaining the thread of mental health advocacy across her discography, Zuraitis introduces a repetitive lyrical statement here offering a motivational mantra that encourages self-reflection and perseverance in the rebellious. Zuraitis’ husband and GRAMMY-nominated guest drummer Dan Pugach provides an intense rhythmic dynamic representative of the in-between mindset and consequential moment of breaking free from negativity.

Adamy presents “Love’s In Need of Love,” a meaningful arrangement of the Stevie Wonder classic “Love’s In Need of Love Today,” which she began working on soon after the 2016 US Presidential election. With a conviction that the lyrical message was more pertinent than ever, she approached Zuraitis and Alexa, who together brought their expertly layered vocals to the fore. Continuing the record’s theme of conjuring change and focusing on what we can do to move forward, “Love’s In Need of Love” remains overwhelmingly positive.

The group’s fiery original composition, “Change It,” is a call to action on the climate crisis, featuring Alexa’s husband, four-time GRAMMY-winning drummer Antonio Sanchez. Imploring the world to confront change before destruction, the track grapples with acceptance as the first step toward healing, followed by action. “Change It” is a climactic moment on the record, engaging listeners with the question of whether we should change it or leave it the same.

The album finishes with the group’s arrangement of the Irish folk song “Danny Boy.” Inspired by a rendition on YouTube by Jacob Collier, Adamy wrote the original arrangement in remembrance of her grandfather, who often sang the song during her childhood. The heartbreakingly refined classic is blossomed by SONICA’s transformative vocal harmonies. The only song on the album recorded with vocals and vocal effects alone, “Danny Boy” is grounded in the beauty of emotional depth and supported by each fully-exposed voice.

Justifying the distinct truth that the harmonies of human voices are some of the most powerful sounds on Earth, SONICA’s debut statement is an emulation of togetherness and human connection. Across seven thought provoking soulful tracks Thana Alexa, Nicole Zuraitis and Julia Adamy continue to replicate the delicate feelings of life through sound all while calling for reevaluation, pleasure and change in the surrounding world. SONICA, a fierce display of female determination, is due out on all digital platforms on September 30 on Outside In Music.

Bassist Julia Adamy got her degree in Jazz Studies at University of North Texas, but since moving to NYC over 10 years ago she has branched out into many genres and added singing to her arsenal. She has been a first call side-person until the formation of Sonica. Playing with Bokanté, Ben Platt, India Arie, Grace Kelly and most recently a part of Sam Smith’s band. SONICA became an opportunity to stretch herself vocally and as an arranger and co-writer.

Grammy® nominated, Downbeat cover artist and winner of the International Songwriting Competition, Thana Alexa is an extraordinarily creative force in music. Her latest album, ONA (self-release, March 2020), which earned her two Grammy® nominations (Best Jazz Vocal Album and Best Instrumental Jazz Solo for Regina Carter’s performance), is Alexa’s focus, her mission statement. Translated to “SHE” from her family’s native Croatian, ONA was inspired by the cross generational and cross-cultural stories of the immigrant women in her family and evolved into an exploration of the experiences of contemporary women everywhere. ONA has spawned more female-focused projects, including SONICA and Alexa’s Founding Mothers of Jazz, created in conjunction with MusicTalks concerts to celebrate and honor the powerhouse women who helped build the jazz genre from the ground up, many of whom are not recognized for their contributions because of their gender.

During the 2020 Coronavirus lockdown, Alexa made headlines as a co-founder of what Rolling Stone called the first “virtual jazz festival” and fundraising initiative, Live From Our Living Rooms. Together with co-founders Owen Broder and Sirintip, the team contracted over 120 artists, raised over $140,000, and helped facilitate grants to over 100 US based musicians in need. Live From Our Living Rooms received attention from Rolling Stone, Forbes, The Wall Street Journal, the Financial Times, the BBC, and many more.

Alexa’s most important and ongoing collaboration has been with her husband, five-time Grammy® winner Antonio Sanchez (composer for the Oscar winning Birdman film and drummer with Pat Metheny for 20 years). Alexa has recorded on 4 of Sanchez’s albums including his newest release on Warner Music Group, which features the music of 12 guest artists including Trent Reznor, Dave Matthews, Meshell Ndegeocello, Lila Downs, Ana Tijoux and others.

A Grammy-nominated musician and winner of the 2021 American Traditions Vocal Competition Gold Medal, vocalist, pianist and songwriter Nicole Zuraitis continues to establish herself as an undeniable force in the modern jazz landscape of both NYC and beyond. A vocal chameleon, she infuses elements of multiple genres  into her artistry and songwriting, refusing to limit herself to any one corner of the music business.

Nicole is the premier vocalist for the Birdland Big Band. Her co-produced collaboration “Oil on Water” with bassist Christian McBride is set to release in 2023, featuring all-original compositions and the talents of some of the jazz world’s best. As a recording artist, Nicole has released four albums as leader, including 2020’s All Wandering Hearts. She is also a new member of the modern jazz super group Ryan Keberle and Catharsis, the Dan Pugach Nonet and Sonica with Thana Alexa and Julia Adamy.

In 2019, Nicole was nominated for a Grammy alongside her husband, renowned drummer and bandleader Dan Pugach, for their arrangement and performance of Dolly Parton’s “Jolene.” In recognition of her talents, Nicole has won a litany of other awards, including the New York City Songwriting Competition Coffee Music Project (2016), the Herb Alpert ASCAP Young Composer Award (2014), and the Gold Medal, Ben Tucker Jazz Award, People’s Choice, and Johnny Mercer Award in the National American Traditions Vocal Competition. In 2015, Nicole was the second runner-up in the Sarah Vaughan International Jazz Vocal Competition. In 2020, Forbes Magazine featured Nicole’s pandemic pivot project, “Virtual Piano Lounge Plus One.”