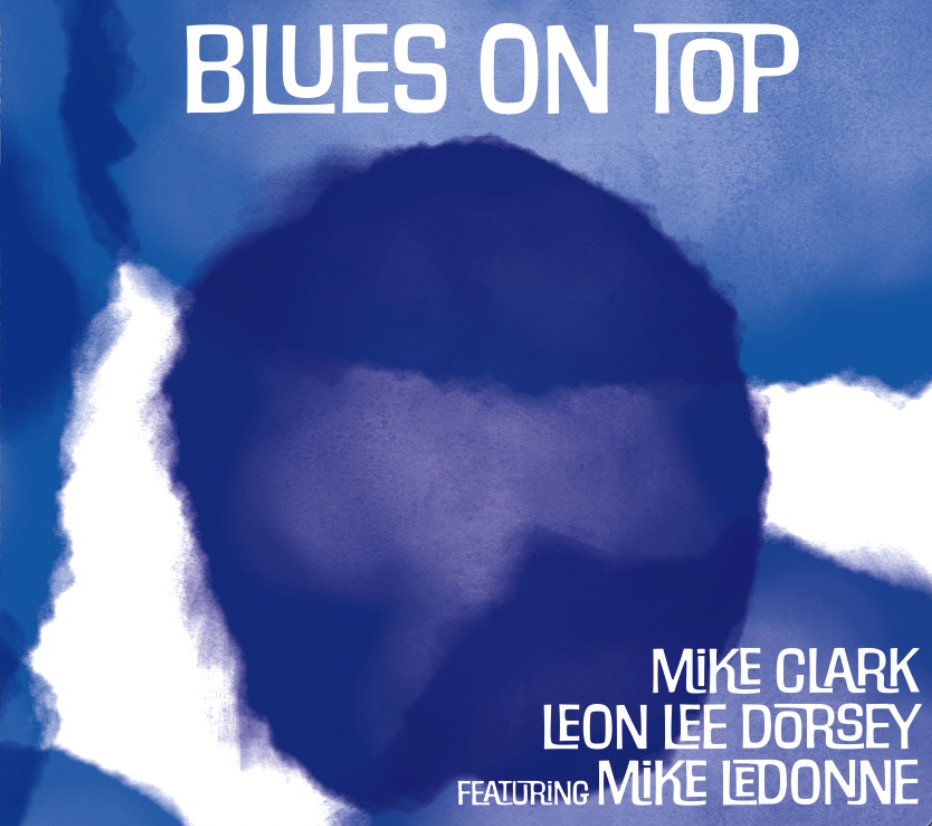 Veteran drummer Mike Clark and stalwart bassist Leon Lee Dorsey continue their fruitful collaboration with the release of Blues On Top. Due out on August 12, 2022 on Dorsey’s Jazz Avenue 1 label, Blues On Top finds these two master musicians in the company of renowned pianist Mike LeDonne, filling out a swinging, top tier trio.

Blues On Top brings Clark and Dorsey together for their fifth recording with each collaboration finding the superb rhythm section augmented by a star third guest. Last year, they released Freedom Jazz Dance, a high-flying Latin jazz tribute to the great Hilton Ruíz with Cuban-born pianist Manuel Valera. Previous collaborations include Thank You Mr. Mabern (2021) with the late Mabern himself, Play Sgt. Pepper (2020) with pianist Michael Wolff and Monk Time (2019), alongside guitarist Greg Skaff. Each release demonstrates a different side of Dorsey and Clark’s deep musical simpatico, with the end result colored beautifully by their chosen featured guest.

Mike LeDonne joins the vigorous rhythm section this time around. From the first notes of “Blues On Top”— his rousing take on Wynton Kelly’s “Blues on Purpose”— it’s evident that this session has been well paired. “Chemistry between musicians is one of those great mysteries,” said LeDonne. “It either happens or it doesn’t, in this case it did!” Magically, the March 2022 session that would become Blues On Top marked the first time these three musicians had ever played together.

The New York-based pianist and organist is a permanent fixture on the contemporary jazz scene, having built a significant presence since the late 1980’s. A first-call sideman for jazz icons such as Milt Jackson and Benny Golson, LeDonne has made his mark on numerous recordings as a sideman and leader. Since 2003, he has steadily released well-received albums on the Savant label, including two piano trio recordings, one being 2019’s critically acclaimed Partners in Time with Christian McBride and Lewis Nash. Now with Blues On Top, LeDonne once again showcases his undeniable prowess in this intimate format.

Similar in approach to its predecessors on the Jazz Avenue 1 label, Blues On Top is decidedly “old school” – and unapologetically so. Opener “Blues On Top,” finds Clark tipping from the outset and playing the same quick fills on his kit that bass great Paul Chambers played on Wynton Kelly’s original 1965 version of “Blues on Purpose” (either from the Verve studio album Undiluted or the live Xanadu album Blues on Purpose, recorded at the Half Note). Once they get out of that stop-time head, it’s off to the races, with Dorsey walking insistently while channeling his inner P.C. and LeDonne stretching mightily on his burning solo. “Wynton Kelly was one of my biggest idols,” said LeDonne.  The last thing I wanted to do was try to play that tune straight up because there’s no way I could ever get close to what Wynton did. So I wrote ‘Blues On Top’ with the same accents but featuring the drums.

From that energized homage, they slide into a loping swing rendition of Oliver Nelson’s “Stolen Moments.” A decided McCoy Tyner influence comes out on LeDonne’s cascading solo here while Dorsey offers a beautifully melodic, vocal-like bass solo. LeDonne’s “Lock It in the Pocket,” a showcase for Clark’s signature time displacement chops, finds the drummer and pianist engaged in some conversational exchanges midway through. Clark’s solo at the tag is the perfect culmination of this funky track.

Clark’s clever, busily swinging arrangement of “Willow Weep for Me” is a highlight. On this track, LeDonne stretches out while Clark maintains a lower flame on his intricate, Elvin Jones-influenced solo. Dorsey next carries the plaintive melody on a gentle rendition of “Angel Eyes,” underscored by Clark’s delicate brushwork, before delivering an emotive bass solo.

The trio then tears through a brief but blazing rendition of Duke Ellington’s “C Jam Blues,” paced by Dorsey’s impeccable walking, which is right out of the Leroy Vinnegar/Israel Crosby school. LeDonne responds by channeling his inner Bud Powell-Art Tatum on this extraordinary chops showcase. “I’ve been wanting to record ‘C Jam Blues’ for, like, 40 years,” added Clark. “It was one of the first tunes I ever played that released me from the Gene Krupa/Louie Bellson path I was on in sixth grade. And as soon as I played it in junior high big band, I felt like I was a real honest-to-goodness bebopper. I even bought a beret and shades the next day.”

Their version of Cedar Walton’s dynamic and elaborate “Jacob’s Ladder” drifts into the Ahmad Jamal zone with Clark’s busily shifting undercurrent setting a sly tone, while their interpretation of Dizzy’s “Birks’ Works” is imbued with deep blue hues. Dorsey carries the familiar melody on top of Clark’s slick brushwork before breaking away for a potent solo of his own. As he explained, “I tried to get a combination of Ray Brown’s very melodic approach and a little of the fluidness of Niels-Henning Ørsted Pedersen, just in terms of getting some less idiomatic qualities.” They close out with a rousing, shuffling version of The Beatles classic “Can’t Buy Me Love,” with energized, blues-drenched solos by Dorsey and LeDonne. It’s a fitting way to end – just three consummate musicians swinging at the highest level.