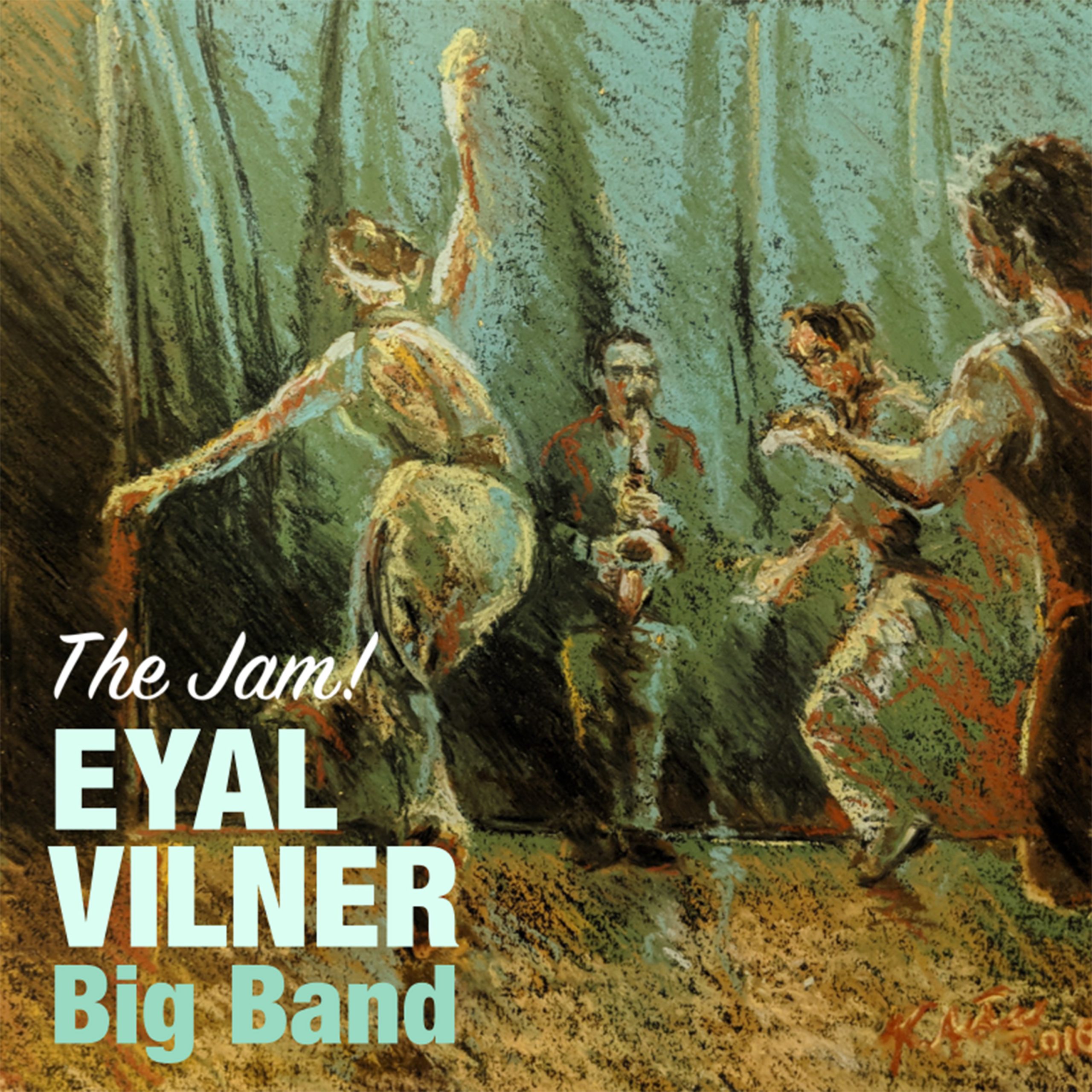 Eyal Vilner is pleased to announce the release of The Jam!, the latest sparkling release from the Eyal Vilner Big Band on July 1, 2022. As founder and leader of one of New York’s finest large ensembles, multi-instrumentalist Vilner takes direct inspiration from New York’s swing dance renaissance on The Jam!, presenting a selection of vibrantly swinging originals that further cement his status as an innovative voice on the modern day big band scene.

Born in Tel Aviv, Vilner moved to New York in 2007, and began his big band the following year. The ensemble has performed at New York landmarks like Jazz at Lincoln Center, The Guggenheim Museum, Birdland, Dizzy’s Club, Smalls Jazz Club and Minton’s Playhouse. The band has also been a big hit in New York’s thriving dance halls. “Whether the audience is sitting or dancing, we see the joy in their eyes and in their souls. There’s something very powerful about a large ensemble that really swings together,” Vilner says.

To deepen his understanding of Jazz music, Vilner began taking swing dance lessons. Those interactions led to the Jam meetings, led by Vilner and professional dancer Gaby Cook, and proved one of the main inspirations for the album. “I get inspired by a syncopated move – it can be just as inspiring as hearing a great musician or reading a book. There’s open conversation between swing music and swing dancing, as both of these art forms are rooted in improvisation.”

Nine of the tracks derive from a recording date close to the culmination of SW!NG OUT, the critically acclaimed collaboration that ran for two weeks at Manhattan’s Joyce Theater. The EVBB interacted with virtuoso professional dancers, directed by choreographer Caleb Teicher, and those improvisations inspired new compositions from the pen of Vilner. The New York Times called it ‘groundbreaking’ – “it was pretty magical,” says Vilner. “Ten musicians, twelve dancers making twenty-two great improvisers on stage.” The Jam! gives Vilner a chance to showcase his own artistic development, as a writer, composer and arranger as well as an improviser, a feat that distinguishes it from previous EVBB albums.

Vilner’s musical philosophy involves finding the common root of parallel artistic forms, and seeing if those conversations can inform mutual creativity. “Both jazz dance – vernacular jazz dance and lindy hop – and jazz music come from the same place, being rooted in Black American art forms. They complement each other.” But the big band is keen to reject any vintage or retro labels: “We’re reaching back to a tradition of moving and dancing to jazz music, delving deep into the sub-dialects within the language labelled as jazz, and then striving to tell a new, compelling story with these aesthetics in mind.”

That new story begins with a fresh take on Duke Ellington’s “Just A Lucky So-and-So”, a roomy big-swinging number that transports you into the dance hall immediately. Imani Rousselle’s vocals pack a punch, and there are growling, snuffling solos by Brandon Lee (trumpet) and Ron Wilkins (trombone). Vilner comes to the fore on “Chabichou”, named after Vilner’s favourite goat’s cheese, and reflecting his improvising roots in bebop and hard bop.

“Another Time” is another Vilner original; pianist Jon Thomas provides the Monk-ish swagger: “It reflects my first years in New York, when things were rough and falling apart – but the music itself had a lot of soul and pure love.” The band breeze through the toe-tapping blues of the title track – with elegantly scored tutti lines, stylishly executed shout choruses and a strident contribution from baritone player Josh Lee –  before launching straight into Vilner’s irony-laced “contemporary pandemic love song”, “Will You Be My Quarantine?”

“Monday Stroll” celebrates the legacy of Vilner’s mentor (and legendary saxophonist and flautist) Frank Wess, with Vilner reorchestrating a Wess combo date from 1957. Vilner features in a more fleet-footed role on “Chad’s Delight”, named after a “fast, Balboa dancer” whose movements Vilner took inspiration from.

There’s a lot of character to Vilner’s tracks – Brianna Thomas’s witty take on “Hard Hearted Hannah” is followed by an elegant arrangement of Sy Oliver’s classic “T’Ain’t What You Do”. Towards the end, Vilner steps up to the microphone and invites dancers to strut their stuff, paying tribute to the ‘Ambassador of Lindy’ Frankie Manning. Dance is also in the spotlight on the aptly named “Tap Tap Tap” (featuring Caleb Teicher on tap duties), following Brandon Bain’s suave take on Al Hibbler’s hit “After the Lights Go Down Low”, and Vilner’s commentary on the reliability of repair work in New York, “Call Me Tomorrow, I Come Next Week” (featuring the big tenor sound of Michael Hashim).

“Belleville” introduces a different mood; written during the time Vilner spent in the Parisian district, he adds an Ellington-inspired arrangement to a composition that’s already characterful. With Vilner on flute, Ron Wilkins channelling ‘Tricky’ Sam Nanton on trombone and Brandon Lee on Solotone trumpet, the result is a richly evocative composition. There’s one last flourish on “Jumpin’ At the Woodside” – a call for dancers to jump out of their chairs for the last tune of the evening.

Using jazz traditions as a springboard for a contemporary approach to syncopated rhythm, The Jam! achieves a brilliant representation of present and past jazz movements. Honing in on the core values and origins of swing, Vilner accesses inspiration for each composition through his unwavering curiosity with the improvising body. Conscientious, imaginative and novel at once, The Jam! finds Eyal Vilner and his big band in pursuit of the swinging textures of jazz, while perhaps redefining them along the way.