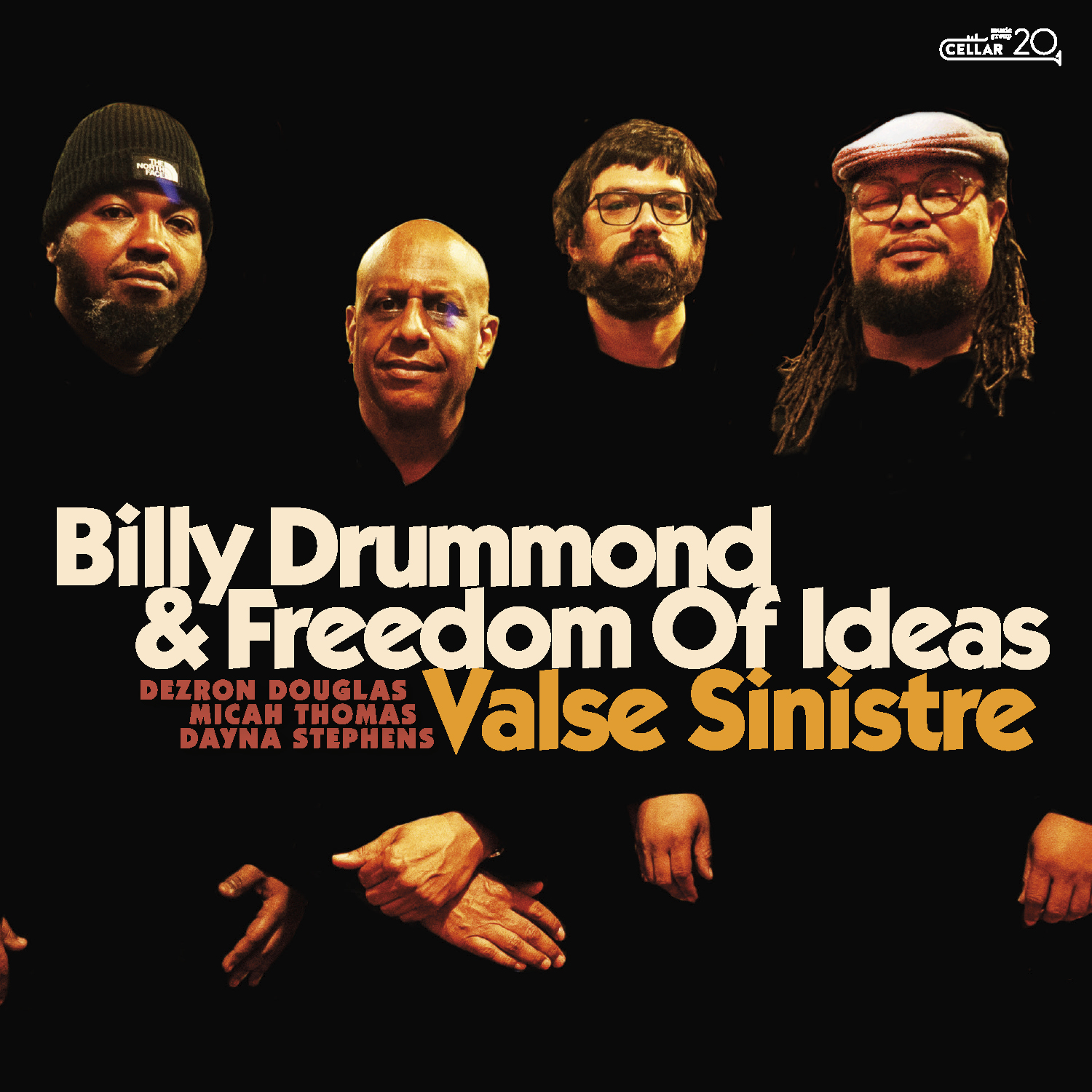 “[Drummond] has led compelling straight-ahead combos of his own since the early 1990s, propelling them with his lucid swing feel and his ear to the broader shape of a song” — The New York Times

“Drummond carves things with his own flourish” — DownBeat

“Drummond plays with a quiet authority, akin to the radiant strength of someone who can command the attention of a room without saying a word” — JazzTimes

Acclaimed drummer and composer Billy Drummond will release his new album Valse Sinistre on August 5 via Cellar Music Group. A major release for Drummond, this is his first album as a leader since his 1996 cult hit, Dubai (Criss Cross), which was named the top jazz album of the year by critic Peter Watrous in the New York Times, and was recently chosen as one of the “50 Crucial Drumming Recordings of the Past 100 Years” by Modern Drummer magazine. On Valse Sinistre, the drummer of creative faculty and warmth documents a vibrant iteration of Freedom of Ideas, a fluid ensemble he’s been leading for the past decade. The multigenerational project features Dayna Stephens on saxophones, Micah Thomas on piano and Dezron Douglas on bass. Valse Sinistre is produced by Jeremy Pelt, as part of his ongoing partnership with Cellar Music Group.

“A couple of the pieces I’ve had in my book for the bands that I’ve been leading for quite some time,” says Drummond. “But they evolved as time went on and according to personnel changes. So I was very comfortable playing them and open to going in any direction.”

One of the newer additions to Drummond’s repertoire is Douglas’ arrangement of his mentor Jackie McLean’s “Little Melonae.” Solos from Thomas, Stephens and Drummond spotlight a rhythmic conversation among band members that persists. “Jackie’s what I would consider truly a jazz musician,” says Drummond, who cherishes a CD booklet on which the departed master inscribed: “To Billy, one of my favorite drummers of all time.”

“His music was kind of a soundtrack to my early beginnings playing the drums. I’ve always been a Jackie McLean fan.” Thomas’ contribution “Never Ends” features Stephens on soprano and offers plenty of opportunity for lyrical interaction among the artists. Understated yet richly nuanced in harmony and feel, the music introduces what Drummond considers Thomas’ unique aesthetic. “I chose this one because it’s a little different from everything else on the record,” he says. “Micah’s an introspective composer and he has an unusual slant on improvising.”

The title track summons an energy Drummond has a hard time putting into words. His years touring with Bley left an imprint on his artistic perspective; he vowed, if he ever had the opportunity to record more music  as a leader, he’d include her seldom heard composition “Valse Sinistre.” On soprano, Stephens’ handles the snaky progression with his signature fire and lyricism. “Carla’s music is unique,” says Drummond. “I really fell in love with it when I started working with her.” The artists’ treatment of David Raskin’s “Laura” reflects a collective reverence for the song. “The melody and the chord changes — the form — it doesn’t really need anything else,” says Drummond who’s been a fan of the noir feature for decades. “We didn’t improvise on it, per se. It was more about embellishment. I just love the song. If I were a vocalist, I would just sing it.”

Another seldom recorded tune that appears on Valse Sinistre is Grachan Moncur’s “Frankenstein.” Thomas makes a bright, contemplative statement following solo remarks from Stephens that move through chambered sections. Drummond and Douglas remain responsive, loose and interactive through the tune. The leader’s sole original on the record, “Changes for Trane and Monk” intercuts John Coltrane’s harmonic ideas with Thelonious Monk’s melodic leaps and tendencies — a beloved combination for Drummond. During solo sections, the band almost intuitively forms a trio sound with Thomas laying out, invoking resonant energy from “Chasin’ the Trane.”

In December 2020, the community lost treasured artist and friend, pianist and composer Frank Kimbrough. Drummond is the drummer on Kimbrough’s 6-CD Boxed set, Monk’s Dreams – The Complete Compositions of Thelonious Sphere Monk (Nouvelle, 2018), and the two were close friends as well as colleagues at Juilliard, sharing similar tastes in music. “Frank was a big fan of a lot of people I worked with,” says Drummond, “namely Carla, Stanley Cowell, who we lost only two weeks before Frank’s passing, and Andrew Hill —  all very unique artists. We shared that affinity.” He chose to include Kimbrough’s composition “Clara’s Room” as an homage to his friend after recording it on a compilation of Kimbrough compositions which Nouvelle Records issued following his passing. “That was also the first time I heard it and I thought it was beautiful.” The artists interpret the music as a story unfolding. “It’s a moment of solace on the record.”

Thomas steps out swinging on Cowell’s “Reconfirmed,” a tune providing a kind of deconstruction of “Confirmation.” In different contexts, Drummond has been addressing the composition since recording it on Cowell’s 2015 release, Reminiscent. “Stanley was one of those guys I always wanted to play with, but I didn’t think I ever would,” he says. “When that opportunity came about, I jumped at the chance.” Valse Sinistre concludes on something of a symbolic note for the drummer-composer with Tony Williams’ “Lawra.”

“As well as acknowledging him as one of the greatest drummers of all time, who changed the way people play and interact with music, I wanted to salute him as a composer, which I think tends to be overlooked in terms of his contribution to this music,” says Drummond. “He was writing music pretty much since his appearance on the scene in the early 1960s.” Drummond elected to lead the artists in a gesture of collective improvisation across the feeling of the whole piece, rather than over melody or changes. “We didn’t really explore the form in that way. We just state the melody and then play off of the theme, collectively.”

These nine works share slices of Drummond’s life in the city and on the road. Despite the one-off consumption surrounding playlist culture, he curated the Valse Sinistre set for listeners to enjoy in its entirety. “It’s an album. I chose the songs and the order because that’s the way I wanted it to flow.” The artists approach each piece with nuance and grace, casting a new mood on each tune, naturally honoring the compositions and each other. “I always choose people to play with me who have that similarity of eclectic tastes,” says Drummond. “It means I can go anywhere at any given time, and these people will go right along with me.”