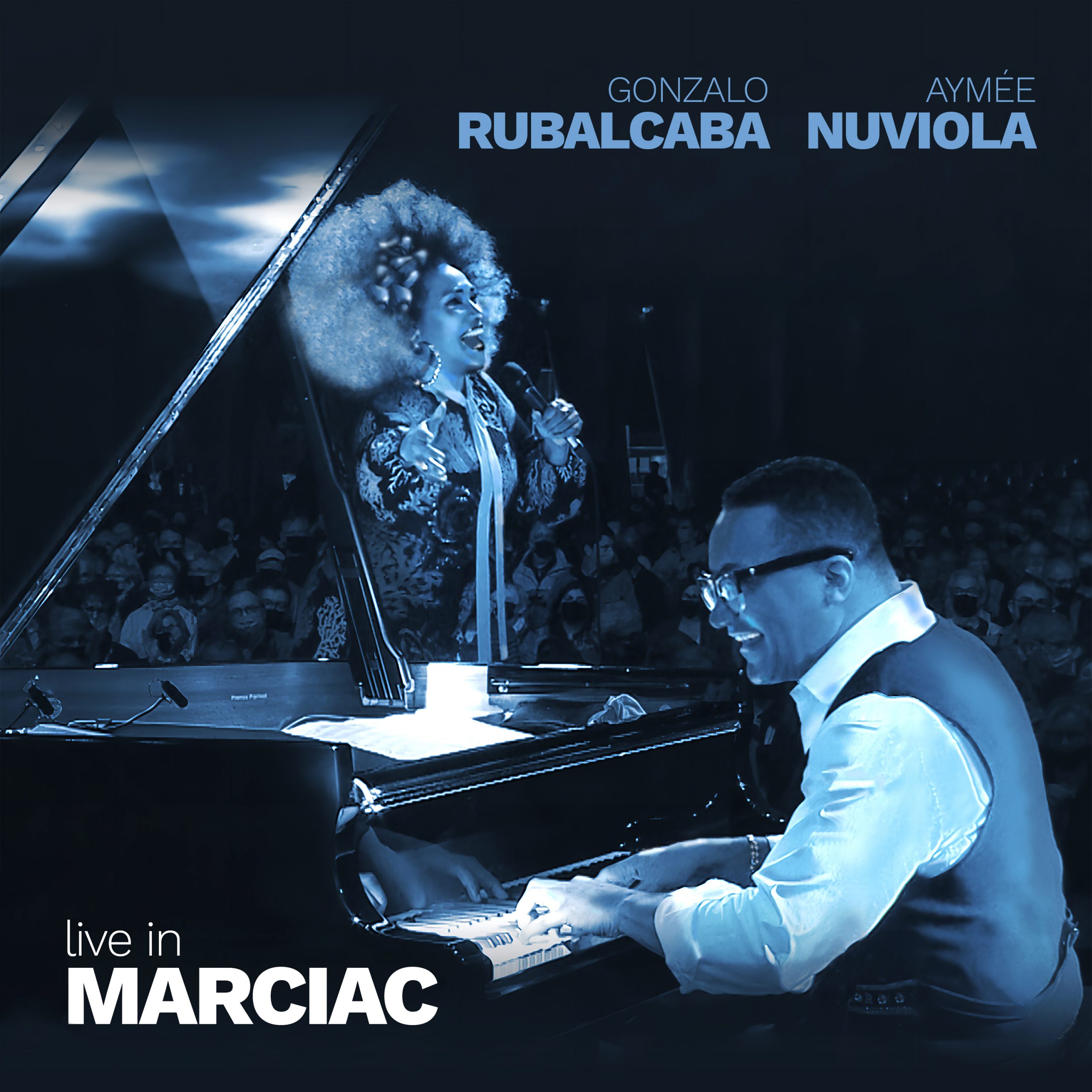 Pianist Gonzalo Rubalcaba and Vocalist Aymée Nuviola Make Magic on Live in Marciac, their new duo album due out May 27 via 5Passion

Multi-GRAMMY® winning jazz pianist Gonzalo Rubalcaba and both GRAMMY® and Latin GRAMMY® winning vocalist Aymée Nuviola present a collective mastery on their latest collaboration, Live in Marciac, due out May 27 on 5Passion Records. Live in Marciac captures an evocative and timeless live concert, full of Latin jazz classics and a few originals, from the duo’s 2021 tour performance at the Jazz in Marciac festival in France at the Chapiteau Concert Hall.

Childhood friends from Cuba, Rubalcaba and Nuviola first united as musical collaborators in 2020 with the release of Viento y Tiempo – Live at Blue Note Tokyo. The record was hailed for its celebration of Afro-Cuban jazz influence, receiving a 2020 GRAMMY® nomination in the Best Latin Jazz Album category. Now with the release of Live in Marciac, the illustrious duo returns in glory, incorporating a superlative blend of masterpieces that defy musical trends. Live in Marciac follows a banner year for both master musicians; Rubalcaba just won a GRAMMY® for his jazz trio album, Skyline, the first Latin American musician to do so as a leader in the Best Instrumental Jazz Album category. Nuviola was nominated this year as well for Best Tropical Latin Album for Sin Salsa No Hay Paraíso, and performed during this years’ telecast.

Eager to perform live in a post-lockdown world, the duo seized an opportunity in 2021 to embark on a multi-city duo tour throughout Europe, which included a performance at the Jazz in Marciac Festival in late July in the Southwestern corner of France. For Rubalcaba and Nuviola, these live performances represented a dignified restoration to their musical relationship. “To play live again is to come back to life. It is to live again as we know how to do it, and doing it with Aymée is divine,” Rubalcaba reflects.

Throughout the pandemic, Rubalcaba and Nuviola began their duo work together, eventually materializing as what Nuviola describes to be a “totally genuine and unique” musical relationship “with all the rigor that Cuban music deserves.” One aspect of this relationship is the overarching message on Live in Marciac: emotional memory.

With their animated Cuban rhythm and flavor, Rubalcaba and Nuviola create a sound that connects audience members to their past experiences. They achieve this through some stunning performances of jazz classics, including “Lágrimas Negras” and “El Manisero,” two arrangements that played momentous roles in their musical adolescence and growth. Other tracks on the recording, like Nuviola’s original composition “Nada es para ti” balance the repertoire while embracing an intimacy typical of a vocal-piano duo offering.

Gonzalo Rubalcaba is a virtuoso musician and considered one of the leading artists in Afro-Cuban jazz. He has received worldwide acclaim from outlets such as the Wall Street Journal, NPR, Downbeat, the Chicago Tribune, and others. He has been nominated for 18 GRAMMY® and Latin GRAMMY® Awards collectively and has won five in total.

Aymée Nuviola, who has been nicknamed “La Sonera del Mundo,” has effectively fused timba, jazz, son and salsa throughout her impressive musical career. In 2020, she won the GRAMMY® award for Best Latin Tropical Album for her album A Journey Through Cuban Music and in 2018, she won the Latin GRAMMY® award for Best Tropical Fusion Album, for her album Como Anillo Al Dedo.

Two accomplished, international music forces unite on Live in Marciac, a breathtaking display of music’s power to unite, heal, dream, merge and elevate our spiritual capacities. On this impressive collaboration, Nuviola and Gonzalo are found as expressive and mesmeric as ever, proving that music can create a community no matter where it comes from and travels to.