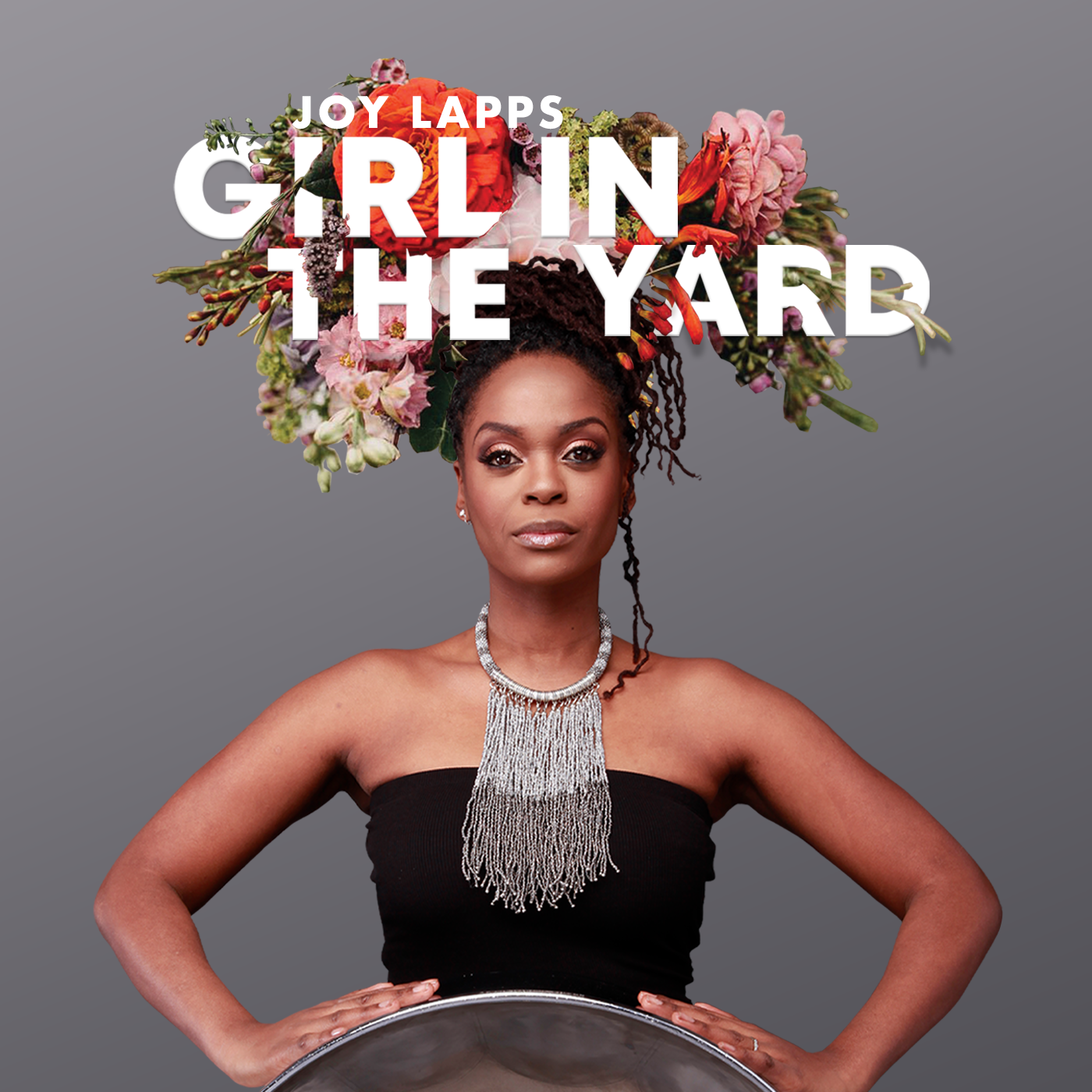 Multi-modal artist and composer Joy Lapps issues Girl in the Yard, her fifth leader release and first full-length album exclusively featuring original music and arrangements. Informed by a vibrant palette of styles, Girl in the Yard, due out July 8,  pays tribute to the many women who have helped facilitate her mastery of the steelpan and supported her success in the steelband movement. “The process of composing and recording this album became an exploration of how I’m able to show up in the world because of the women, especially in my community, who have supported me,” says the Grammy-nominated instrumentalist.

The 2016 Juno Award winner has performed across the globe as a leader, a highly sought featured artist and a member of acclaimed steelbands, including Calypsociation in Paris, Birdsong Steel Orchestra in Trinidad and Tobago and her current aggregation, Pan Fantasy, in her native Toronto. To interpret Girl in the Yard’s bold repertoire, whose character ranges from deeply introspective to celebratory, Lapps assembled a powerhouse band of improvisers. Her core ensemble features Elmer Ferrer on guitar, Jeremy Ledbetter on piano, Larnell Lewis on drums and co-producer Andrew Stewart on electric bass, alongside contributions from Michael Shand, Courtenay Frazer, Rob Christian, Eric St-Laurent, Rosendo Chendy Léon, Lapps’ sisters Shaquilla Alexander and Asha Lapps, and Elizabeth Rodríguez and Magdelys Savigne of OKAN, among other virtuosic voices.

Culling elements from distinct but mingling traditions, including West African, Afro-Caribbean, samba and vintage radio hits, Girl in the Yard spotlights lyrical improvising, rhythmic discourse and cinematic songwriting. “I think about how I want the listener to feel,” says Lapps, who had been listening to selections of meditation and chanting throughout the latter half of the recording process. She considers Girl in the Yard microcosmic, documenting a moment of her expansive research into the women behind her work: “These are the women who have allowed me to flourish in a creative space where, traditionally, women were considered outsiders.”

As a concept, paying tribute to women — those known and unknown — emerged during a years-long creative process that began before she gave birth to her son in 2017. “It’s something that grew on me more and more,” says Lapps. “As a part of my master’s research, I attempted to map out the tradition of steelpan in jazz by looking at the discography. I don’t think I have more than one woman’s name on that list from the early ’60s.”

Recorded at Canterbury Music Company in Toronto, Girl in the Yard opens in dramatic gesture on “Lulu’s Dream.” Named for her sister, the story unfolds around syncopated melodies and a conflux of texture from Lapps’ tenor pan, Frazer’s organ and symphonic phase shifting from Ferrer’s guitar. “Josie’s Smile” pays homage to the artist’s baby sister and features melodic, conversational panning between Lapps and mentor Andy Narell behind tenor and alto, respectively. “Breathless” reveals Lapps’ tender treatment of melody, singable and meditative, and serves as a feature for Shand on piano and Christian on flute. “Juliet Blooms” and “Eyes of Amerralys” provide two interpretations of Lapps’ complicated yet beautiful relationship with her mother. “The more I experience life as a mom, human being and wife,” she says, “the more I love and appreciate my mother.”

“Morning Sunrise” introduces a new arrangement of her acclaimed composition first recorded as the title track for her 2014 release. Alongside Stewart, she created sections for strings, as well as a vocal chorus broadly inspired by the samba tradition. With sonorous lamentation from Rodriguez and Lapps, “Serena” serves as the record’s fulcrum, reflecting an established friendship that blossomed while the artist was studying abroad in Paris. Sections breathe into one another, as a short potent feature for Savigne gives way to a contemplative solo from clarinetist Colleen Allen. Stark syncopation, layering repetition and displacement pulse throughout “Sharifa the Great.” Spotlighting the elastic hookup between Lewis and Stewart, the composition honors the artist’s eldest sister who plays in concert with Lapps and Alexander on “Granny’s Pan.” The latter features an instrumental artifact from her grandmother. “I think someone sold her the instrument knowing that she didn’t know what a chrome-finished steelpan looks and sounds like,” says Lapps, who wrote the tune in gratitude for her grandmother’s love and support.

Composing “Fly,” Lapps remembered how her father John Lapps refrained from telling his children what to do after they reached a certain age: “Instead, he would say, ‘You have your wings.’” On melodica and piano, and lead synth, respectively, Bruce Skerritt and Eddie Bullen help interpret her father’s words and those of every father figure in her community. “These two men are really important figures, especially for those of us who are connecting back to our Afro-Caribbean roots.”

Lapps views herself as a community artist and creative womanist. Her work on and away from the bandstand aims to support and uncover women’s contributions and helps facilitate greater representation. “There’s way more women in the panyard now than there was traditionally,” she says. “I think the ‘we belong’ of now is that we belong in spaces of leadership, of creativity and arranging, and we belong in positions where we can really mold and shape the culture of the space. And we have been doing that.”

Lapps’ approach as an educator centers ensemble as a practice and explores diverse modalities for engaging learners from different backgrounds and experiences. She is the recipient of the 2014 Dr. Alice E. Wilson Award to support graduated studies from the Canadian Federation of University Women; the 2015 Caribbean Music and Entertainment Award as Top Steelpan Soloist from PenPro Productions; and the 2016 HUTTers Phenomenal Woman Award for Leadership in Community Arts.