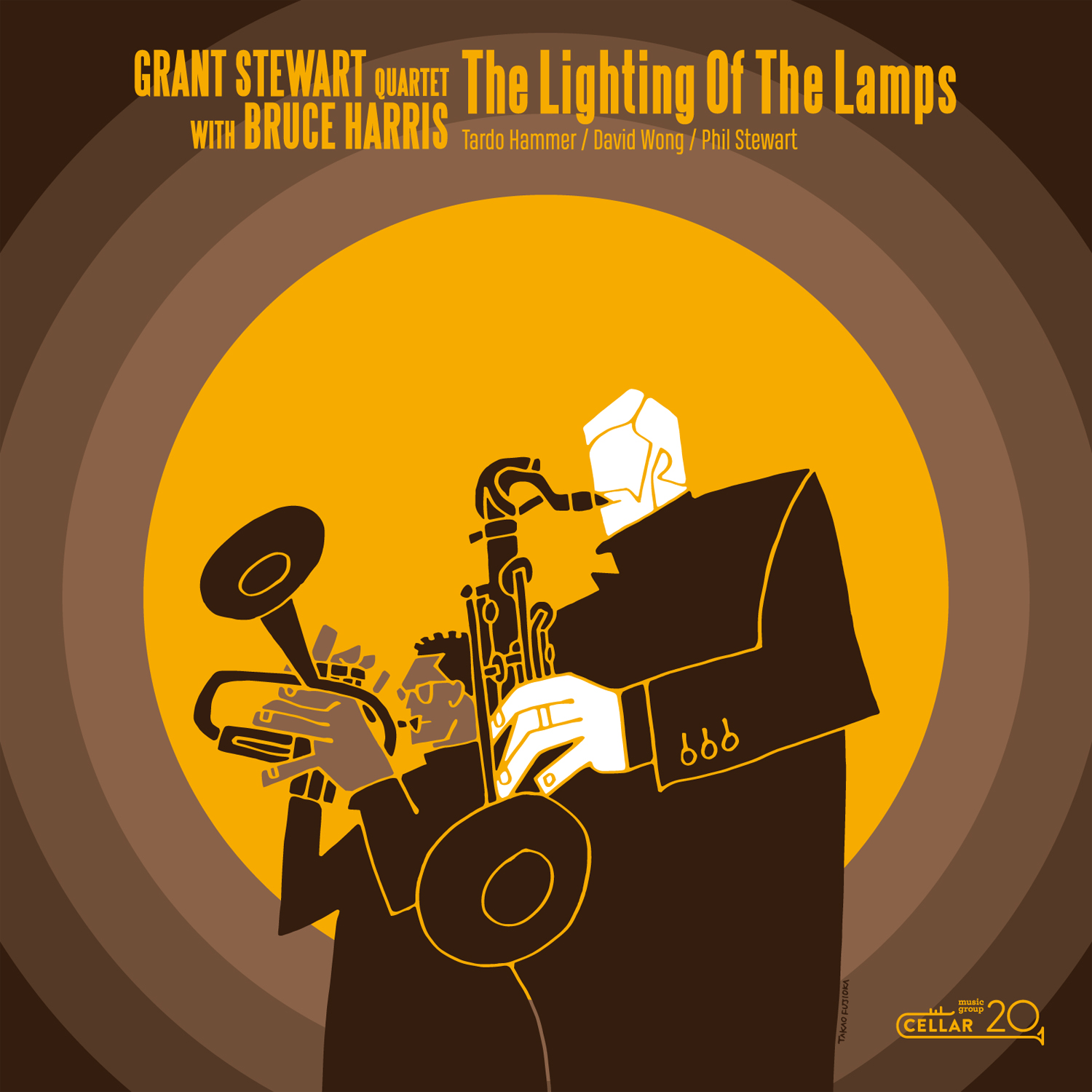 Tenor Saxophonist Grant Stewart Unleashes Dynamic Spirit On The Lighting Of The Lamps, due out June 17 via Cellar Music Group

​​Cellar Music is delighted to announce the release of The Lighting Of The Lamps, from acclaimed tenorist Grant Stewart, on June 17, 2022. A quintet session that sheds light on some unfamiliar corners of jazz history, The Lighting Of The Lamps features regular collaborators, bassist David Wong, pianist Tardo Hammer and drummer Phil Stewart. The group is joined by special guest trumpeter Bruce Harris for a searching, straight-ahead date.

Stewart, Toronto-born, former DownBeat Rising Star and collaborator with the likes of Jimmy Cobb, Harold Mabern, Louis Hayes and Clark Terry, returns to Cellar Music following his successful 2020 release of Rise and Shine. But listening back to this session on a gray, New York afternoon, Stewart was reminded not of daybreak but rather, dusk.

In particular, Stewart cast his mind back to the opening stanza of T.S. Eliot’s poem ‘Preludes’. It begins starkly, conveying the bleakly quotidian occurrences of a quiet, lonely city, before adding a chilling coda: “and then the lighting of the lamps.”

“For me the poem really captures the feeling of life in the city, and of the sense of something beginning,” says Stewart. “For us musicians, quite often our day begins when the lamps are lit,” as dusk moves slowly into evening time and the city becomes a buzz of activity once more.

The album marked another opportunity for Stewart to record in the legendary Van Gelder Studio in Englewood Cliffs, New Jersey. “It always feels like magic,” Stewart says of the chapel-like studio that has birthed any number of iconic jazz recordings since Rudy van Gelder opened it in 1959. That aura characterizes the exchanges here, as solo contributions carry a sheen added by the beautiful acoustic and esteemed surroundings.

The interconnectivity between the band members is one that can only be nurtured through years of playing together on bandstands. But the affectionate tones of a newer voice – trumpeter Bruce Harris – add an extra spark to proceedings. “I was really happy to have Bruce with me on this date. He’s a fantastic trumpet player, and we’ve got to work together quite a bit over the last few years.”

Harris impressed on his 2021 leader date Soundview and returned here bringing tunes along for the quintet to grapple with. One of those is the opening track “Little Spain,” written by Clifford Jordan and recorded in 1962 by Lee Morgan on Take Twelve. Stewart’s improvisation here has a striking energy; as Chris Wong justly relays in the album notes, this kind of play is a “masterclass in shaping and building momentum on a hard-swinging solo.”

The group is firmly embedded in tradition, a fact demonstrated by its approach to original tunes. The single new composition on The Lighting Of The Lamps actually comes from piano master Art Tatum – the chords for “A Piece Of Art” are lifted from the 1937 standard “All God’s Chilean Got Rhythm”, a favorite of Tatum’s – it’s an intense blow-fest for the ever-bustling frontline of Stewart and Harris.

Another fleet-fingered track arrives on “Mo Is On” by pianist Elmo Hope, featuring solo scurrying from Harris and Hammer. It’s not the first time Stewart has recorded the twisting tunes of Hope – some are also featured on his live trio record from 2017, as well as Young at Heart from 2008. “I really love his writing,” Stewart shares while discussing Hope’s compositions. “They really make you play differently. The harmony moves in ways you just don’t find in other composers.” The swirling, breathlessness of the track becomes one of many high points on the album.

The band offers a period to show its sentimental side on the timeless ballad “Ghost Of A Chance” before intricate solos fly on the hard-swinging, Latin groove-infused “Out Of The Past,” evoking the Benny Golson sextet.

Dexter Gordon famously recorded “I’m a Fool To Want You” in 1965 at the Van Gelder Studio. Fifty-six years later, Stewart re-records the composition with his wide, resonant tone projecting assuredly. Stewart also digs into his roots on “Bearcat”; learning the jazz fundamentals as a teenager in Toronto, he heard Clifford Jordan for the first time and later encountered him regularly on the circuit when he moved to New York at the age of 19. “Bearcat” is a track of Jordan’s that Stewart has always wanted to record, and the ensemble delivers it here with robust solos.

Harris’ choices bookend the album, concluding with Thad Jones’ “Bitty Ditty”, another lesser-known selection that the ensemble highlights. The musical direction and approach to soloing are consistent with Stewart’s career arc – finding new insights from old songs, making space for each player’s distinctive voice, and allowing an open atmosphere for heartfelt expression to shine through. As the sweet Jones tune brings proceedings to a close, those thoughts are never very far away.