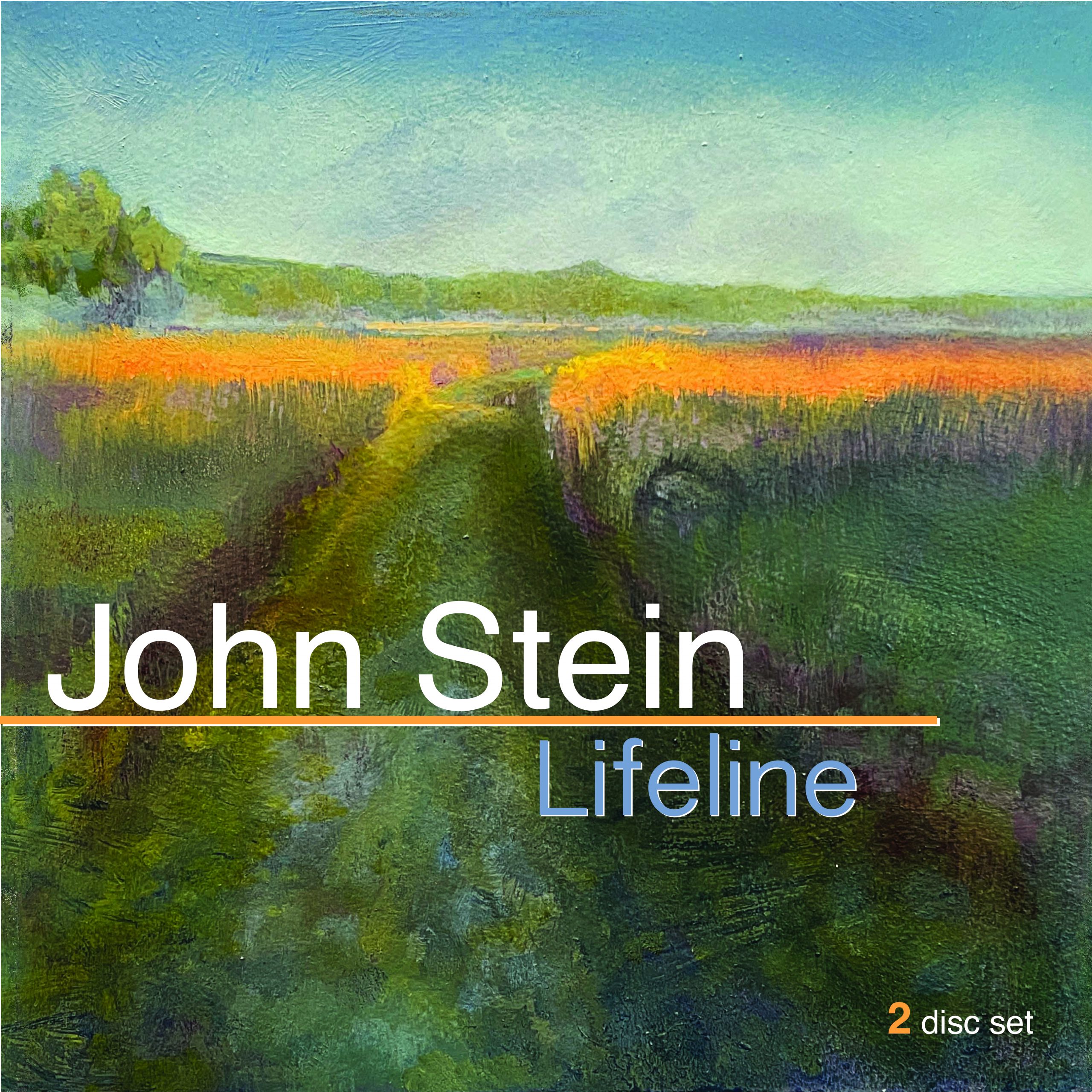 “Stein has the touch.” – Layla Macoran – Jazz Inside New York

“Like his playing, Stein’s compositions display a lack of vanity and are interesting without being overly busy.” – Dave Miele, Jazz Improv Magazine

“There’s a strong sense that his ears are guiding his notes, not his technique, which is something that can only come from spending as many years on the bandstand as Stein has.” – Dr. Matt Warnock, All About Jazz

Whaling City Sound is pleased to announce the June 17, 2022 release of Lifeline, a landmark double album that celebrates the career of John Stein, making a persuasive argument for his inclusion among the most important guitarists of his generation. Selected highlights from Stein’s varied discography capture his eclectic spirit with his honey-toned guitar effortlessly guiding listeners across several decades of brilliance. After retiring from a longtime career at his alma mater Berklee College of Music where he held a professorship since 1999, and upon recently contracting a rare autoimmune disease, the esteemed jazz veteran decided to synthesize his remarkable body of recorded work. Sharing his unique musical vision, John Stein presents Lifeline.

The recorded output surveyed on this compilation spans more than twenty years, from Stein’s 1999’s Green Street to the most recent recording, 2021’s Serendipity. Throughout this assortment of releases, Stein has been consistently regaled for his expansiveness, turning heads with his emotive, subtle, grooving, and precise stylistic excursions. “Working with a clean, undistorted classic jazz-guitar sound, he renders maximum swing and expression,” said veteran jazz critic Jon Garelick in a review for The Boston Phoenix. Stein began playing guitar at the age of 7, but he began studying jazz seriously at the age of 30 when he enrolled at Berklee College of Music. From there, Stein established the tendencies he would demonstrate throughout his career – a warm, clean tone, a serious knack for composing, and an ability to vividly capture a mood through his music. “There’s a wealth of detail – the dips and turns of phrases, accents falling like words – that he gets at even the fastest tempos,” Garelick added.

The Lifeline project came about because of an unexpected health setback. Out of the blue, Stein contracted Myasthenia Gravis, a debilitating nerve and muscle disorder that left him severely impaired, requiring a long stint in the hospital, including two weeks in the ICU on a ventilator. Thanks to excellent medical care, Stein was eventually able to return home, but once there he found himself unable to play guitar. Stein now says: “My coordination is slowly coming back. I have had to adopt a lighter touch with my left hand principally, but also with my picking hand. By adopting a lighter touch, I am gaining some new playing options that I hope to incorporate as my strength and coordination return. I consider all the guitar relearning that lies ahead part of my therapy.” Lifeline, a spectacular overview of Stein’s virtuosic prime recordings over the years, celebrates the past and future in hopes of a return to those musical heights.

The first disc kicks off in style with “Up and at ‘em.” Late saxophone icon David “Fathead” Newman joins Stein, bassist Keala Kaumeheiwa and drummer Greg Conroy for some swift, fluent, and interactive swing as the band burns through the chart. “Brazilian Hug” highlights Stein’s long affinity with the music of Brazil, inspired by an early encounter with the classic recording Getz/Gilberto. “Invitation” is a mysterioso interpretation of Bronislau Kaper’s tune, while “Hotcakes” hits a bluesy mid-tempo swagger, this time backed by “Fathead” Newman on flute, Ken Clark on Hammond B-3, and Dave Hurst on drums. Stein’s poignant, self-penned ballad “Jo Ann” (written for his mother) also features lovely flute playing (this time from Fernando Brandão), before the ultra-funky groover “The Roundabout.”

By this point, there are already tracks from six separate albums featured, a taste of just how varied and prolific Stein has been. More follow – the intimate and delicate chamber-like counterpoint of “Django,” returning to Bronislau Kaper for a tasty take of “On Green Dolphin Street,” “Recoleta,” a tango lament that features international group The Mingotan Project, and “Funkin’ It Up,” a slamming helping of blues-drenched funk, are all taken from different records. In total, we hear fifteen albums represented on this huge collection, twelve of which were released on Massachusetts-based label Whaling City Sound.

As well as blistering swing, there’s a delicacy to Stein’s approach, too – he joins singer and close friend Ron Gill in an intimate duet on “A Weaver of Dreams” and partners with virtuoso bassist Dave Zinno for a conversational take on Jobim’s “Modinha.” The first CD smokes to a close with a brisk waltz rendition of Cole Porter’s “You’d Be So Nice To Come Home To.”

With such a diversity of recordings comes an ever-rotating cast of collaborators, each offering their own minute nuances. The second CD opens with a burning rendition of Horace Silver’s hard bop classic “Nica’s Dream,” this time driven by pulsing contributions from bassist John Lockwood and Brazilian drummer Zé Eduardo Nazario. “Moonlight in Vermont,” a swinging tribute to Stein’s home base in the 1970s, shines the spotlight firmly on the wonderful piano of Larry Goldings, along with the golden-hued tones of Stein’s effortless playing. Two originals follow – the bossa nova “Four Corners” and “Elvin!,” a tribute to Elvin Jones’ loose-swinging drumming, before “Green Street” brings back “Fathead” Newman to tip a hat to guitar great Grant Green by way of a bluesy, organ-fueled shuffle.

“Love Dance” sees the guitarist reunited with singer Ron Gill, while “Ira’s Tango” mirrors “Jo Ann” in paying emotional tribute, this time to Stein’s father, as flautist Rebecca Kleinman, accordionist Evan Harlan, bassist John Lockwood, and drummer Matias Mingote German from The Mingotan Project add timbral intrigue to the mix. “The Night Has a Thousand Eyes” is presented as a Brazilian bossa and “I Remember You” features Stein’s fleet-fingered swinging guitar. Next is the potent electric bossa “Labour of Love” and a melancholic but swinging waltz version of “A Taste of Honey.” There’s a real sense of kicking back on the funk numbers – Stanley Turrentine’s “Sugar” is a soul-jazz staple to which Stein adds a freewheeling solo contribution. The collection concludes with “Le Causse du Quercy,” as The Mingotan Project returns for another harmonically shifting and grooving Stein original.

“He’s in an elite class,” says Wayne Everett Goins, professor of music, director of jazz at Kansas State University and renowned author, “a mere handful of jazz guitarists who consistently put taste above chops and flash. John Stein has the ability to say so much more with less effort than most of his contemporaries can muster.”

With dazzling guitar playing, notable contributions from the side musicians, creative arrangements, and compositions that are at once sophisticated and memorable, the full scope of John Stein’s instrumental and compositional prowess is on display on this prodigious, varied, and musically rewarding retrospective.