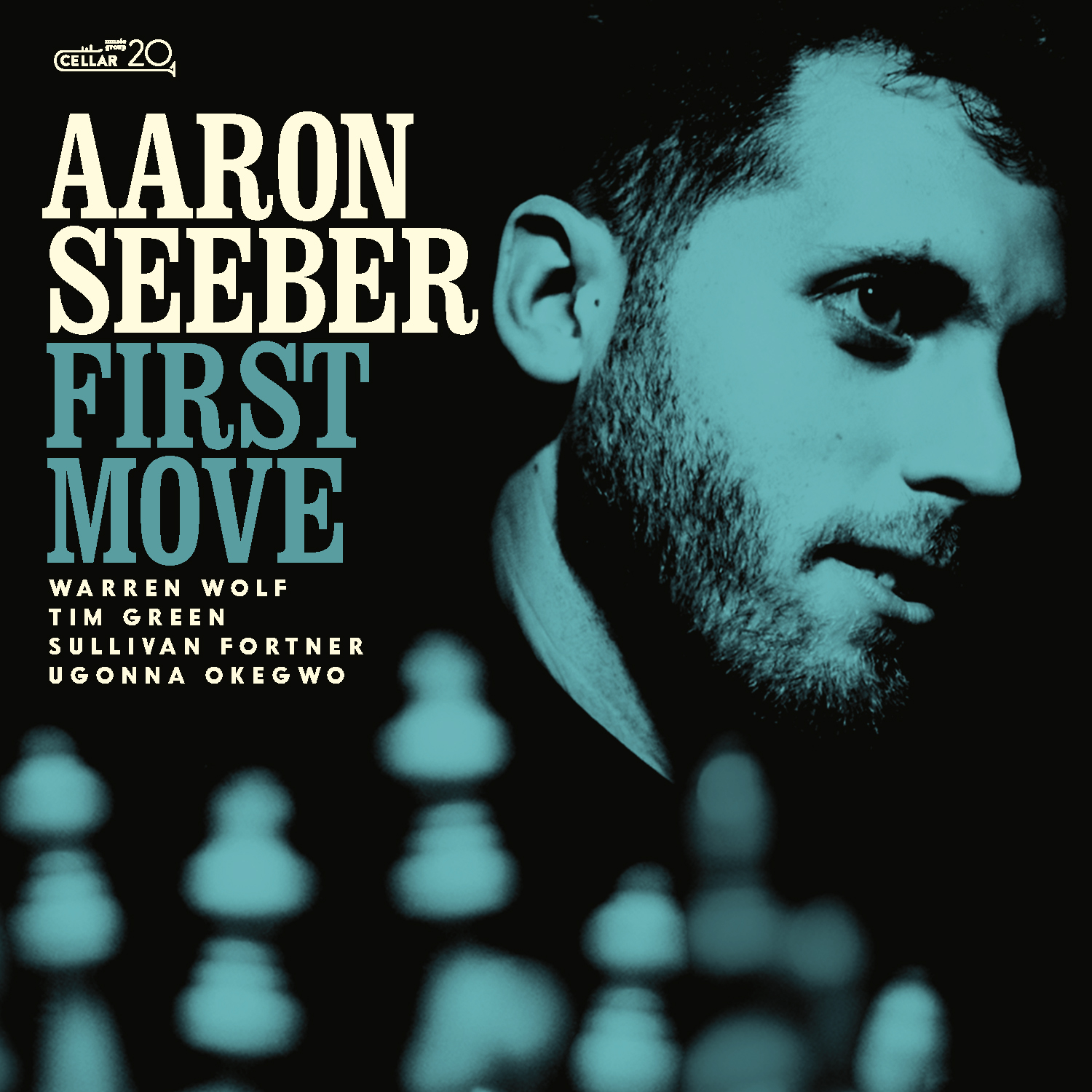 Cellar Music Group is thrilled to announce the May 13, 2022 release of First Move, drummer Aaron Seeber’s electrifying recording debut as a bandleader. Recorded live in Brooklyn at Ornithology Jazz Club on October 19, 2021, First Move captures the dazzling ingenuity of an adroit quintet at work. Performing selections by timeless luminaries including Charlie Parker and Charles Mingus, as well as modern legends such as Geri Allen and Mulgrew Miller, Seeber imbues the conviction and nuance of a seasoned musician decades his senior. Seeber is joined on this auspicious release with his frequent collaborators: vibraphonist Warren Wolf, alto saxophonist Tim Green, pianist Sullivan Fortner, and bassist Ugonna Okegwo.

While this is Aaron Seeber’s debut as a bandleader, the drummer is no novice on the bandstand. A native of Washington D.C. whose visibility on the New York jazz scene continues to rise, Seeber is both studied in the recorded legacy of his instrument and equipped with over a decade of on-the-bandstand experience. At first glance, Seeber’s quintet may look like an all-star assembly, but each of these established artists have a history with the young drummer. As a teenager, Seeber went to see saxophonist Tim Green throughout the D.C. metro area, and by the early 2010s Green started hiring him for gigs.

Many of Seeber’s first major performances were with Green, including weekends at the legendary Bohemian Caverns club where Miles Davis, Billie Holiday, and many others appeared. It was on a Bohemian Caverns Jazz Orchestra date that Seeber first played with and met vibraphonist Warren Wolf, a native of Baltimore. Seeber credits Wolf for his first opportunity to travel and perform abroad during a tour of Europe in 2015. Seeber’s long association with the incomparable pianist Sullivan Fortner began at New York City’s Fat Cat in the band of trumpeter Greg Glassman. Bassist Ugonna Ukegwo and Seeber began playing several years ago and are frequently heard together in pianist Pete Malinverni’s trio.

First Move begins with “Brandyn”, a composition by the great Al Foster. This piece, which became a theme song for Seeber at his long-standing residency at Smalls Jazz Club, is played here with urgency and fervor. The effervescent drum groove on the introduction sets the tone for the performance, with Wolf and Green digging into their solos with unmistakable relish. Seeber pays tribute to the great Mulgrew Miller with “Eleventh Hour”. Wolf and Green, drawing on their years of tenure with Miller, take fiery solos over the late master’s changes. Seeber’s extended drum solo demonstrates his facility around the kit, and astute listeners will notice an homage to drummer Billy Hart in some of these rumbling figures.

The bandleader’s original composition “First Move” harkens back to the mysterious and propulsive sound of Wayne Shorter’s music as heard with the Miles Davis Quintet of the mid-1960s.  Featuring a modal burn at the top with a brief release in triple time, Green and Wolf turn in maximalist solo improvisations while the drummer gets some and more on the outro. The quintet displays its quiet intensity and nuance with Geri Allen’s “Unconditional Love”, featuring tasteful solos from Fortner and Wolf as well as a river of shimmering drumming from Seeber. The live recording concludes with the Charlie Parker classic “Klactoveedsedstene”. This bright-tempoed, energetic bebop exploration ends the album on a high, displaying the stunning facility of five players expertly-steeped in the language of bebop and the blues.

This vivacious live recording captures a snapshot of the vitality of the jazz idiom as displayed by five master practitioners of the artform. First Move cements Seeber’s position as a rising luminary on the jazz scene, showcasing the bandleader’s singular sound on drums, and expert arranging of timeless classics.