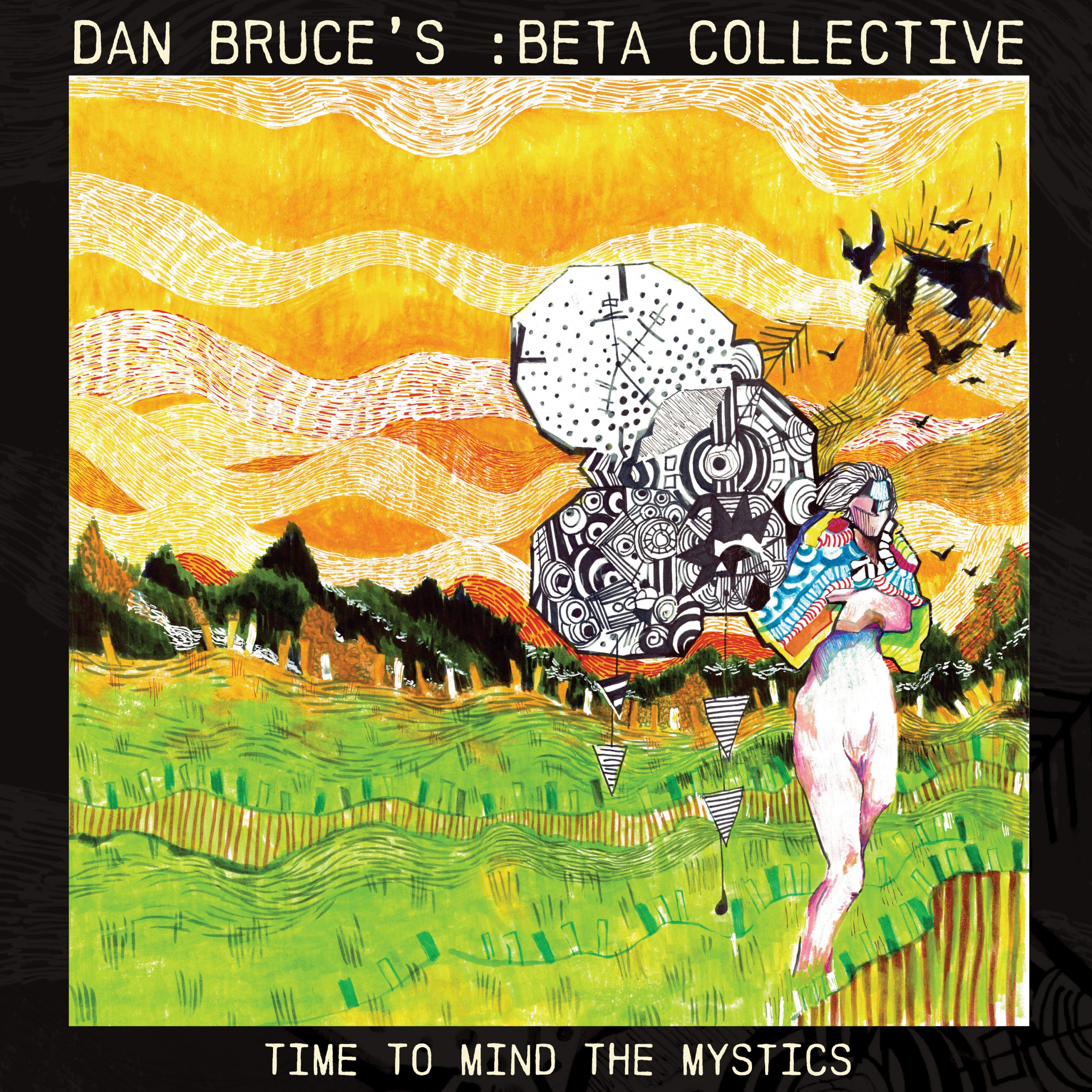 Guitarist Dan Bruce and his :beta collective ensemble present ‘Time to Mind the Mystics’ due out April 29th, 2022 via Shifting Paradigm Records

Shifting Paradigm Records is pleased to announce the return of guitarist Dan Bruce and his :beta collective for their second album, Time to Mind the Mystics, out on April 29th. The record presents twisting compositions, intriguing narratives and a colorful timbral palette while establishing Bruce as a distinct voice in large ensemble writing. Bruce’s :beta collective features Chris Coles on alto and tenor saxophone and vocoder, Brad Wagner on soprano and tenor saxophones and bass clarinet, trombonist Caleb Smith, vibraphonist Will Wedmedyk, Theron Brown on keys, Aidan Plank on bass, drummer Anthony Taddeo and Joel Negus on synthesizers on two tracks.

:beta collective is a powerhouse group founded by Bruce that features some of the Midwest’s top improvisers. The group’s debut record Earthshine was released in 2017 and received critical acclaim; Troy Dostert (All About Jazz) commented that ‘Bruce brings a finely-polished technique that is at the same time subtly discontent, searching for new expressions and willing to take some chances along the way,’ a facet the guitarist expands on as he works his way through :beta collective’s comprehensive second offering.

Bruce describes Time to Mind the Mystics as a collection of thought experiments that revolve around the intertwined future of humanity and technology. Bruce explains: “At the core is the idea that our embrace of technological innovation cannot come at the sacrifice of generational knowledge and ancient wisdom. Our humanity needs to be celebrated, and technology should play a supporting role”. These ideas are represented in both concrete musical ideas (whirling vocoders, ring modulators, synthesizers and electronic programming on acoustic instruments) and overarching philosophies, as the group becomes a vehicle for exploring the nexus between composition and improvisation, tradition and future, constraint and freedom.

Bruce’s growth as a composer is immediately evident on Mystics. He explains: “The approach on this album is similar to the last; write music with specific people in mind and leave enough space in the music for them to stretch out and make it their own.” That development is ablaze in minute one, as Bruce launches into a guitar soliloquy full of crunchy overtones. He continues: “I’ve expanded the textural palette by adding trombone, vibraphone, and synthesizers and group members are doubling on more instruments like bass clarinet and melodica. It really provided a ridiculous amount of timbral variation to work with, and I’m very excited about how it turned out.” The wide range of textures give the soundscape a cinematic feel, complemented by its returning grooves – distinctive, forceful and persuasive.

The title track “Time to Mind the Mystics” is, in Bruce’s words, “the opening celebration of modern life on earth, including technological achievements. It represents the harmony and excitement that can be achieved if we maintain a respect for our humanity as we continue to discover amazing new things.” The song employs ring modulators, distortion and multiple synthesizers to accentuate this concept as improvisation succumbs to the power of Bruce’s fiery, urgent grooves.

“Blueprint” is a twinkling reflection on life that embraces all of its beauty and pain. “The bass and left-hand of the piano represent the dissonances that are under the surface but eventually take over and become an integral part of the overall experience.” On a personal note, Bruce adds “I’ve had several friends, and my wife, tell me while we are hanging out around campfires that I need to learn more three chord songs. This is my three-chord song. It just stretches the rules a little”.

“Insignificance (A Love Song)” expresses the joy to be found from realizing our tiny part in this universe. Dan explains, “This thought keeps me very grounded and reminds me not to take myself too seriously.” It’s an essay in acoustic sounds, opening with bright acoustic guitar, fizzing along and buoyed by shuffling percussion that gives it a Latin flavor.

Narrative plays a significant part in the way Bruce dreams up his compositions: “Slant” is set in a future controlled by technology; there, a human longs for deeper connections with fellow humans, tired of maintaining a façade. They are being counseled by a computer algorithm (Chris Coles on vocoder) on how to be more sincere and genuine. Lyrics like “you can know what you can feel to be underneath it all…and what is left to hide” depict a human looking for meaning.

“The Walk” is tied together by a story, too, as Bruce explains. “During a time of some medical issues I was going to physical therapy every week that involved dry needling. When I left the appointment, I could hardly walk. Soon I realized that the pain also kept me more in the moment than usual, so I began taking long walks immediately after my therapy each week. Around that time, I read an article claiming that people relate most to music that matches the speed of their stride. This piece is based on my gait, which at the time had some hiccups in it. This is also the soundtrack for my wonderful, painful, mindful walks.”

“You vs. You” is quirkier; band members switch roles, the horn makes up the groove, and melodica, vibraphone and guitar direct the emotional energy of the piece. It’s also borne of Bruce’s personal experience: ”I am an obsessive overthinker and often make things much more complicated than needed. It’s about learning to get out of my own road.”

The album concludes with the searching grooves of “Not Knowing” (“the state where we are most available to deeply listen to others”) and “Moth/Flame Blues”, an off-kilter blues that conveys Bruce’s cautious optimism for the future: “I think as a society we can get beyond the things that pull us apart and work towards the greater good. Hopefully…” Bruce’s creation melds personal experience with sterling improvisation – a combination that brings winning results.
Track Listing: