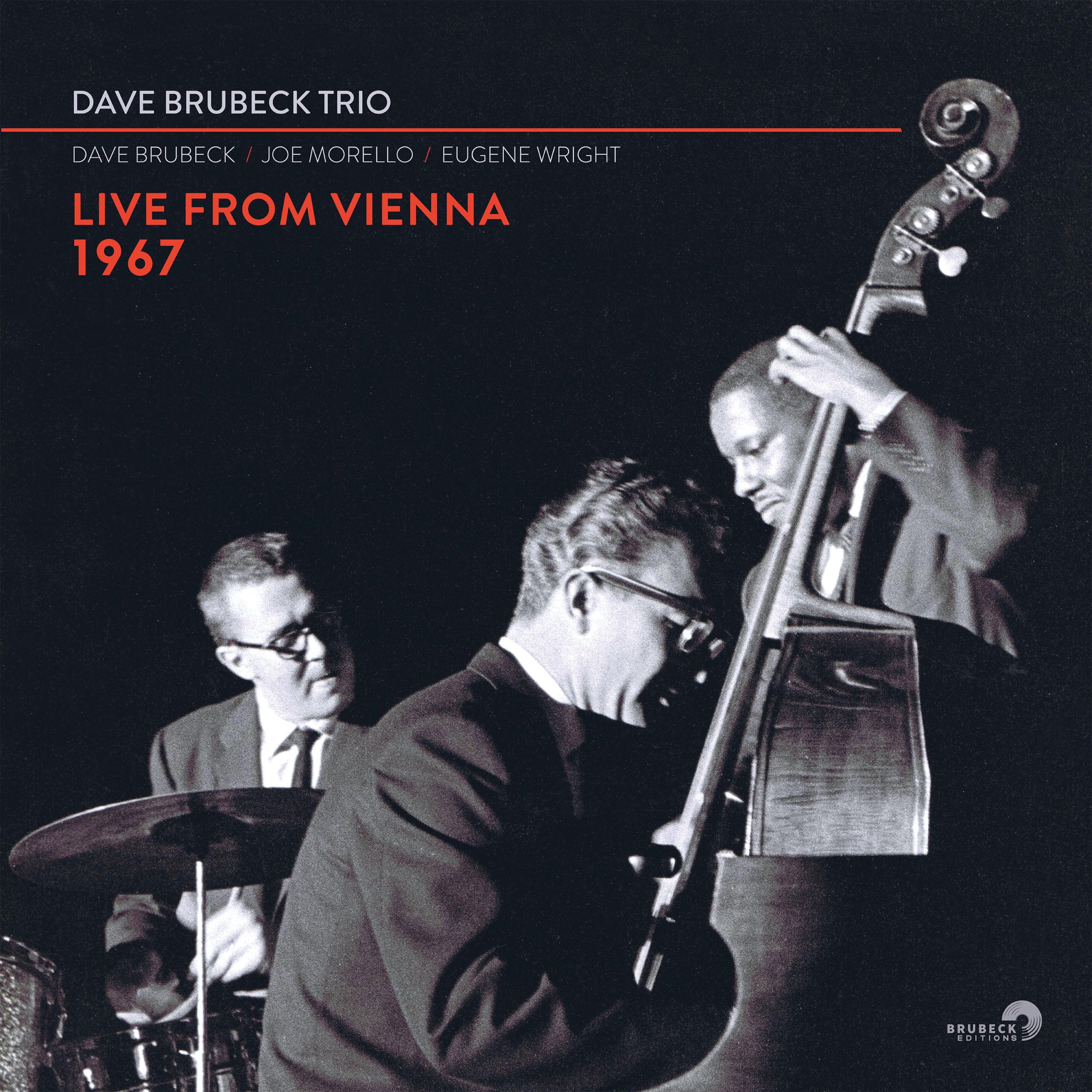 Brubeck Editions is thrilled to announce the release of Dave Brubeck Trio – Live From Vienna 1967, the newly discovered recording of the extraordinary evening when the iconic Dave Brubeck Quartet was forced to take the stage as a trio. This electrifying album marks the only recording of jazz luminary Dave Brubeck, celebrated drummer Joe Morello and acclaimed bassist Eugene Wright performing in a trio context. During this performance at Vienna’s famed Konzerthaus, the pared-down instrumentation proves only to exemplify the genius of Brubeck and his legendary rhythm section. This historical release will drop as a compact disc on April 15, 2022, followed by a special LP release on April 23, 2022 for Record Store Day.

The date was November 12, 1967 and the Dave Brubeck Quartet was nearing the end of their very last tour of Europe. They had played in Hamburg on November 10th, but saxophonist Paul Desmond got “distracted” after going out on the town for one last evening to explore Hamburg with an old friend. When the rest of the quartet went to the airport on the morning of November 11th, Paul was missing. He didn’t make the lobby call or the flight and the rest of the group traveled to Vienna without him.

Grammy nominated composer and son of Dave, Chris Brubeck notes “Knowing my father, he was probably worried about Paul. However, Dave also would have suspected that Paul may have been out celebrating too hard.” Brubeck must have felt assured that Desmond would show up, as Chris indicates, “ there were later flights Paul could take to get to Vienna in time for the concerts”. But Paul never made it to Vienna, and the remaining members of the quartet were reluctantly pushed into an exciting place of spontaneous invention and exploration. As Chris notes “Dave often said that the audience was the fifth member of the Quartet. In this unique situation, the Trio played a singular and inspired set no doubt influenced by this particular concert’s fourth member of the ensemble – the Viennese audience. There was suddenly more solo space for all three musicians to explore with their inspired improvisations. These performers instinctively utilized the great sound and dynamics of this hallowed concert hall both to rattle the rafters and float gentle melodies up to the balconies.” The recording highlights the late “Senator” Eugene Wright, who sadly passed away December 30, 2020. The last surviving member of the quartet, he was always appreciated as the foundation upon which the other members of the quartet relied, but on this recording, he has more space to show off his formidable bass chops.

The trio sizzles with a ferocious energy right out of the gate with a spirited take on “St. Louis Blues”. For chorus after chorus, Brubeck offers up some of the finest examples of his signature chordal and rhythmic performing, while interspersing soulful, lyrical melodies in his right hand. About five minutes into the track during his bass solo, Gene quotes “I’m Going to Wash That Man Right Out of My Hair”, likely a joke for Brubeck and Morello referring to their missing bandmate, Desmond. The band continues with “One Moment Worth Years”, on which Brubeck and Wright’s touch can be described as charming, inventive and elegant.

“Swanee River” features an up-tempo syncopated groove that sets up a very polyrhythmic and high-spirited interpretation of the Stephen Foster composition that the trio had previously recorded alongside Desmond on the 1959 album Gone With the Wind. Notably, Brubeck engages in some very spirited trades with drummer Joe Morello. The trio calms things down with a sweet and tender version of “La Paloma Azul”, a Mexican folk tune rearranged with an ingenious polyphonic twist that appears during the closing melodic statement.

The crowd immediately recognizes “Someday My Prince Will Come”, and the piano leads the group on an intense romp that challenges the underlying time from the rhythm section with an elastic piano solo superimposing 3 against 2. As Chris Brubeck indicates “Dave bends the time to the near breaking point, a musical drama that an audience can really feel and follow.” The album concludes with a tune known throughout the world – “Take the A Train”.

As Chris Brubeck espouses, “I think if our dad were alive to hear this Brubeck Trio recording now, he’d be flashing his famous big smile. He would be extremely proud to hear how, more than half a century ago, he, Gene and Joe got thrown a curve ball and knocked it out of the park!”