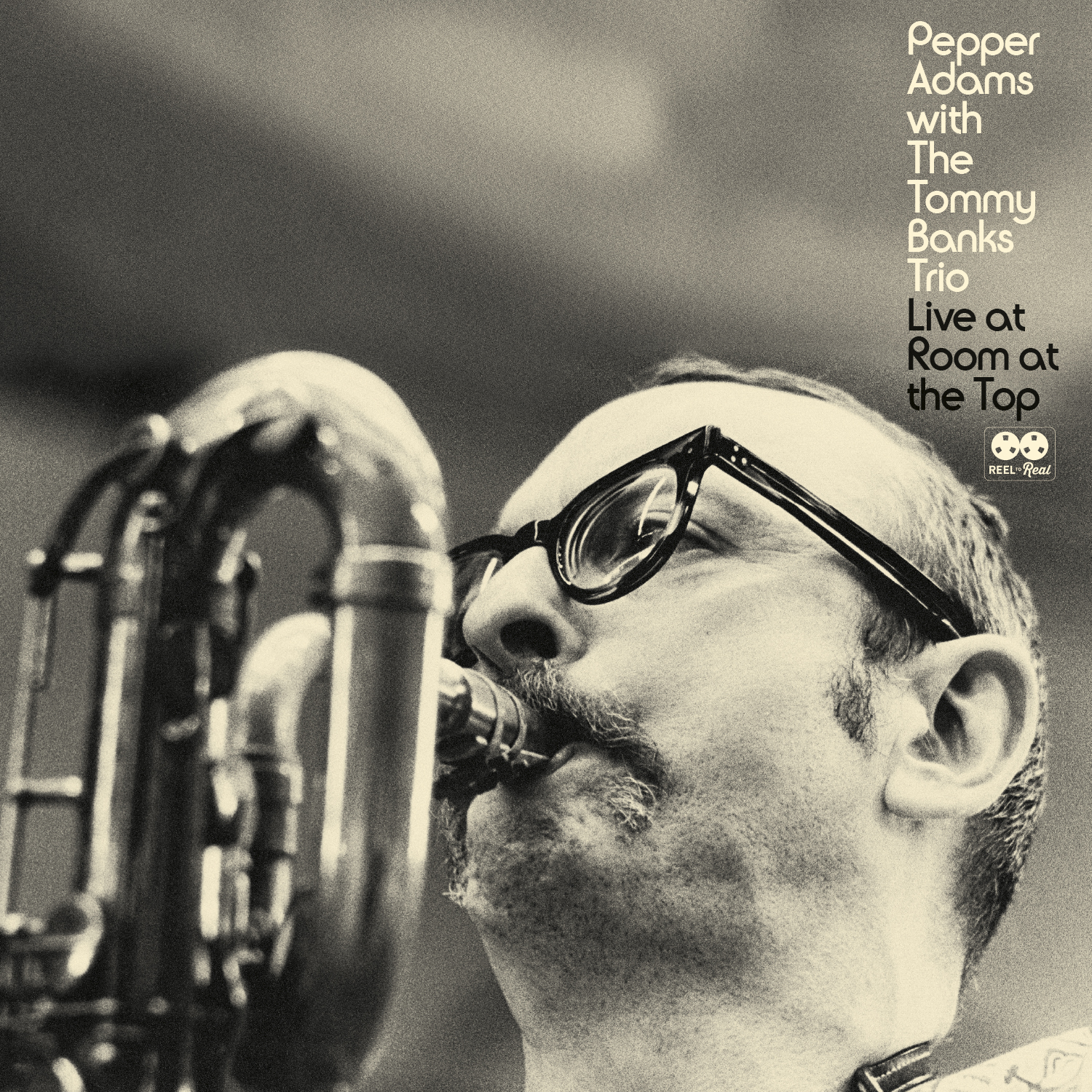 Cellar Music Group Announces Archival Imprint From Reel to Real Recordings of ‘Pepper Adams with The Tommy Banks Trio: Live at Room at the Top’

Deluxe CD/Digital with 2 bonus tracks on May 6

Reel to Real is delighted to announce the release of Pepper Adams with The Tommy Banks Trio: Live at Room at the Top. This two-disc set marks the historic release of a live performance by the late baritone saxophonist from September 25, 1972 at the University of Alberta. With Adams stationed at the helm on bari sax, his band is completed by the virtuosic Tommy Banks Trio featuring Tommy Banks on piano, Bobby Cairns on electric bass and Tom Doran on drums. The first release from a rich tape archive from music producer Marc Vasey in Edmonton, Alberta, the deluxe edition 180-gram double LP is mastered by Kevin Gray and produced by Cory Weeds. Packaged in a gatefold sleeve, the set includes an extensive booklet with rare photos, essays by Gary Carner and Weeds and interviews with baritone saxophonists Frank Basile, Gary Smulyan and Vasey. Live at Room at the Top is the eighth historical release from Reel to Real Recordings, an archival imprint of Cellar Music Group.

The stunning double-LP set of Pepper Adams with The Tommy Banks Trio: Live at Room at the Top will be available on April 23, 2022 as part of Record Store Day. On May 6, a deluxe double compact disc and digital album including two bonus tracks will be available.

Known for his superb rhythmic sensibilities and melodic ingenuity, Adams is in full form on Live at Room at the Top with striking solo performances that further propel his stature as a versatile and imaginative saxophonist. Gary Carner, author of Reflectory: The Life and Music of Pepper Adams, underlines the ‘long-simmering disappointment’ Adams experienced throughout his career as someone who was often ignored to be a true innovator. Though Adams’ reputation was impressive, it at times worked against him. Known mainly for his work with John Coltrane, Charles Mingus, Lee Morgan, Donald Byrd and countless other jazz legends, the saxophonist’s main locale on the side casted a shadow on his fate as a leader. The long-overdue excavation of a tape like Live at Room at the Top will help abandon such a claim, for few like them exist. With only a handful of performances showcasing Adams at the front, Live at Room at the Top is not just a cultural artifact, but a critical and necessary justification of his mastery.

Disc 1 features a rendition of Thad Jones’ “Three and One.” Jones was one of Adams’ greatest influences, and as such, Adams almost always selected a few of his exemplar’s tunes to perform at gigs. A lofty precedent is set on this opener, leaving an arresting impression that Adams’ creative faculties are both abundant and merely heating up. After this sweltering introduction, Adams properly announces himself by means of an original ballad, “Civilization and Its Discontents,” a composition that appears a few years later in his discography on Ephemera (1974). Along with the original “Patrice”, these are the only known live performances of the two Adams originals.

Over the course of his evening in Alberta, Adams’ harmonic articulation, rhythmic command and consistency only became more defined. Adams utilizes Sonny Rollins’ “Oleo” as another space for an 11-minute solo (at this point, he has already done so twice on “Three and One” and “Patrice”), something Basile directs our attention toward in his interview with Weeds. Carner adds in his essay that Adams would typically end a live set with “‘Tis,” which we might also assume to be the end after the live applause is heard as the track closes; however Cellar offers more. The second disc closes over a wave of standards, the old show tune “Time on My Hands” and the very passionate “Stella by Starlight.”

Many called him a ‘jazz man’ – someone who would play no matter the circumstance and without excuses. With a posthumous release like Live at Room at the Top, listeners find a new understanding of this relentless spirit. Unedited, impressively melodic and ideologically extensive, Pepper Adams’ pageant of brilliance on Live at Room at the Top is a spellbinding adventure that unfolds and fortifies the legacy of a true inventor.

ABOUT REEL TO REAL:

Reel to Real is the archival recording imprint of Cellar Music Group. Founded by Cory Weeds in 2018, Reel to Real strives to uncover historically important, archival jazz works and make them broadly available in a variety of formats. Last July, Reel to Real’s release of Roy Brook’s Understanding was widely considered one of the top historical releases of the year with accolades from The New York Times, The New Yorker, JazzTimes, All Music Guide and others.