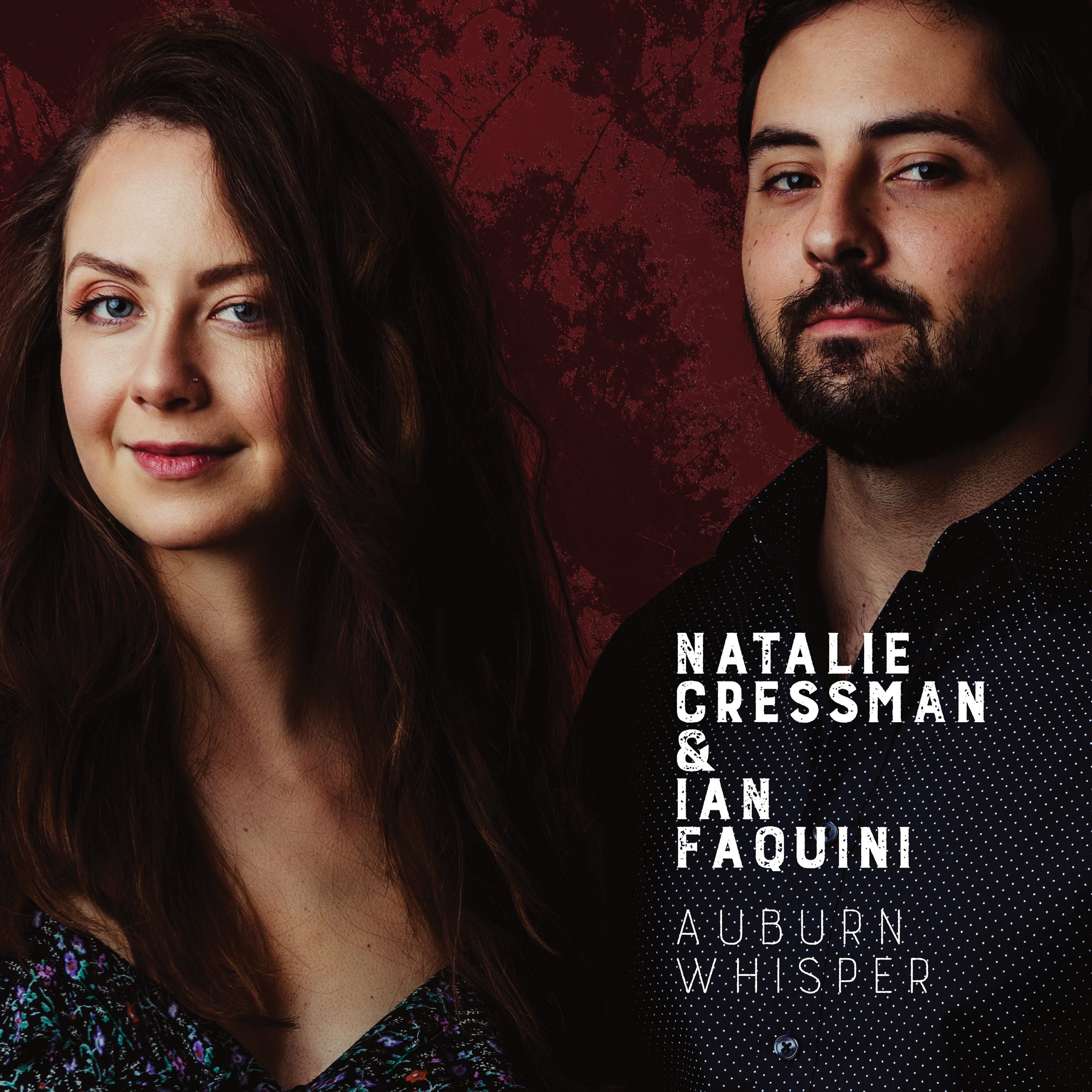 Auburn Whisper—the latest album from trombonist, singer, and songwriter Natalie Cressman and guitarist, composer, and vocalist Ian Faquini—not only serves as a testament to the couple’s symbiotic musical partnership but also to their resilience during unprecedented times. Written and recorded in 2020, Auburn Whisper finds the two artists blending traditional Brazilian rhythms with modern, expansive arrangements—reflecting on people and places they miss while discovering joy within the present moment. Auburn Whisper will be released on April 15, 2022 via GroundUP!

The first single, “Afoxé Pra Oxum”, was released in late January. Watch the video here. On March 4, the second single, the title track, will be released on all platforms, along with an accompanying music video.

Some might say that Cressman and Faquini were destined to meet in the majestic redwood forests of Cazadero, CA. There, musicians from around the world gather annually for Brazil Camp—a week-long retreat that offers masterclasses from the South American country’s greatest talents. As children, Cressman and Faquini accompanied their parents to the camp, where they unknowingly played their first notes together at seven and eight years old, respectively.

Raised in the Bay Area, Cressman was surrounded by music. Her father, Jeff Cressman, is a renowned trombonist, producer, and engineer, while her mother, Sandy Cressman, is a jazz singer and passionate interpreter of Brazilian music. Faquini, meanwhile, was born in Brazil and relocated to Northern California when he was eight. As a young guitarist, his interests were centered firmly on rock music. But that changed at 15 when he met the legendary composer and guitarist, Guinga, at Brazil Camp. “We hit it off immediately,” recalls Faquini of his mentor. “When I met Guinga, I switched my entire focus to Brazilian music.”

Over the next decade, the pair forged successful careers on either side of the country. In New York, Cressman became an accomplished trombonist and vocalist, recording a variety of solo projects, performing in Broadway pit orchestras, and building a following in the jam, funk, and jazz circuits with acts like the Trey Anastasio Band, Peter Apfelbaum, Big Gigantic, and Umphrey’s McGee. Remaining in the Bay Area, Faquini established himself as one of the region’s foremost guitarists and authorities on Brazilian music. In addition to releasing his own music, Faquini joined the faculty at Berkeley’s California Jazz Conservatory and became an in-demand collaborator—often working with Jeff and Sandy Cressman.

But it was Brazil Camp that would eventually unite the two musicians as adults. The title track of Auburn Whisper details those early days together in the forests of Northern California. “The magic and beauty of the redwoods just fit with those feelings of opening up to somebody, musically and romantically,” shares Cressman. The song also includes a nod to Guinga, who, years before, had a premonition that the duo would become involved.

Cressman and Faquini’s relationship flourished and, in 2019, they released Setting Rays of Summer. While they intended to spend much of the following year touring around the acclaimed album, the global pandemic changed their plans. Returning to California, the couple channeled their disappointment into songwriting. They settled into a comfortable routine, which included weekly recording sessions at Jeff Cressman’s home studio. The process, Cressman recalls, “was all very organic. Without any commitments or restraints, we were able to take the time we needed to realize these songs and bring them to life.”

That freedom also allowed the pair to take a more hands-on approach as producers and, for Cressman, to broaden her work as an arranger. “The arrangements took on a big role in the overall sound of the album,” notes Cressman, who typically writes the duo’s English lyrics, while Faquini composes the melodies. In contrast to the stripped-down, live tracking of Setting Rays of Summer, Auburn Whisper found the duo revisiting each song, building layers of lush, nuanced trombone and multidimensional vocal harmonies. “With the extra time, we were really able to pay attention to detail,” she adds. “Normally, it would have taken us years to write this music.”

Many of the songs on Auburn Whisper were influenced by the unique era that they were written in—and the rainbow of emotions that arose during lockdown. Threads of yearning and lament intertwine with joyful memories and introspective contemplation. “Segredo De Dadá,” for instance, finds Faquini longing to visit his grandmother (nicknamed “Dadá”) in Copacabana. When he sent the expressive song to Guinga, the composer felt his own sense of saudades for Brazil Camp, which was canceled amidst the pandemic. Inspired, Guinga added lyrics, conjuring surreal, juxtaposed imagery of Rio and Northern California. Similarly, the poignant “Rear Window” (named for the classic Hitchcock film), paints a scene of isolation and desire. At the other end of the spectrum, the dreamy “Already There”—which the couple dubs their “Pandemic Anthem”—is about accepting one’s current state of being and bravely facing the unknown.

Indigenous Brazilian folklore also permeates the album, thanks to Iara Ferreira—a frequent collaborator of Faquini’s, who wrote the majority of Auburn Whisper’s Portuguese lyrics. “Iara’s words just meld so beautifully with the music,” Cressman says with admiration. “She always ties in a really fitting meaning that goes with the vibe of the song.” Among several examples is the spritely opening track, “Afoxé pra Oxum,” which references Oxum—the goddess of rivers, waterfalls, and freshwater. Set to a foundational ijexá rhythm, the meditative track incorporates a traditional chant to the deity, who is also a symbol of fertility, beauty, and wealth.

“Brazilian music and culture is a mix of African, European, and indigenous traditions,” explains Faquini. “Indigenous words are part of Brazilian Portuguese and contribute to the rhythm of the language, so I’m always thinking about that when writing songs.” One particularly percussive vocal performance can be heard in “Curandeiro,” in which the duo sings about a healer who cares for the Mundukuru people of the Amazon. The song also marvels at human beings’ vital connection to nature—another prominent theme of Auburn Whisper. The bright “Benção de Iansá,” meanwhile, offers a blessing to Iansá, the goddess of winds, storms, lightning, and fire, who is frequently called upon to ease the pain of life’s difficult moments.

Reflecting on the turbulence of the pandemic, the duo certainly conjured their own inner strength—growing together as both artists and as a couple. “With the year that 2020 could have been, there was certainly a feeling of loss. But it ultimately gave us time to be creative—something that we rarely have when we’re touring,” shares Cressman. “Together, we were able to get back to the heart of why we really love music.”