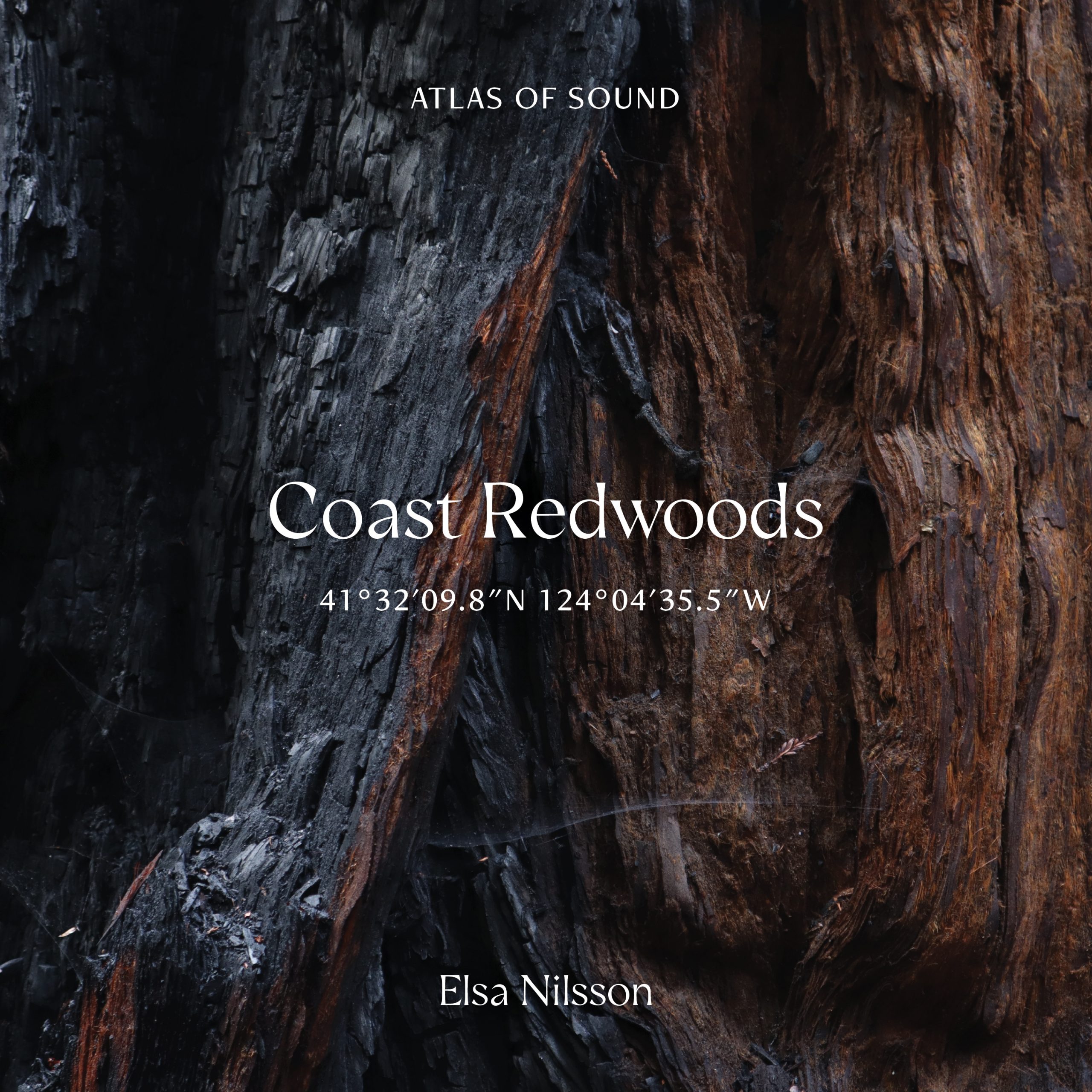 Flutist and composer Elsa Nilsson issues Coast Redwoods 41°32’09.8”N 124°04’35.5”W on ears&eyes Records, the first release from her Atlas of Sound series inspired by human connection to locations of the natural world, on April 22, 2022. Lush and melodic, at times subversive, Nilsson’s trio recording invites listeners into dense woody thickets where breezes idle and sounds of footsteps disappear into layers of pine needle. The ten-movement suite emerged from improvised material Nilsson recorded at two sets of coordinates, a month apart from each other. When she began composing in earnest, the Brooklyn-based artist out of Sweden had in mind her personnel: Jon Cowherd on piano and Chris Morrissey on bass, two fiercely exploratory artists who intuit aspects of Nilsson’s orchestration and enter each sound grove with nimble awareness.

“The secret is in the tempo,” says Nilsson, “how slow [the redwoods] move. For me to hear them I have to slow down, stay still. Really, really listen. When I do, I find music in every movement. There’s a melody in the rustle of leaves as the wind blows through them and they release and float to the ground, a groove in the sound of footsteps, real or imagined.”

Another secret is in Nilsson’s treatment of leitmotif throughout the recording: “For me, an ecosystem is expressed in the similarities and connections between things.” She sought to have the gesture appear in every movement, but not wholly materialize, developing instead across the arc of the suite. “It pops up and goes away.” Elements of the motif might emerge in the bass movement, or in the piano responding to a related phrase. “When you get to the final movement, it’s familiar and you don’t know why. It’s like the feeling you get when you’re walking among trees where you’ve never walked before.”

Certain movements, including “Old Growth,” “Hold On To Each Other” and “Proof of the Unseen,” engage the leitmotif using giant intervallic leaps. Others, as in “Sunshift Haze,” allow melodies to pass from one instrument to another: “I’ll take a piano melody and move two or three notes into the bass part — there’s a connection to every part of the ecosystem from the bottom of the roots to the top of the trees.”

During her visit to the north end of Redwood National Park, Nilsson recorded what would become the seeds for seven movements, later recording those for “Old Growth,” “Proof of the Unseen” and “Coralie” in the Grove of Old Trees outside Occidental. “The suite depicts many different aspects of how we relate to the Redwoods and their connection to each other … It is a story of interconnectedness that spans our history and informs our future.”

The third of her records to be mastered by Nate Wood, the Coast Redwoods opens in tender inquisition on “Sunshift Haze,” named for the morning hours when fog blooms across the redwoods before the sun breaks through. The melody develops over time, playing in totality only toward the end of the movement. “As the piece progresses, the melody becomes more and more clear, like the sun burning off the fog,” says Nilsson. “The flute represents the sun, bass and piano the fog, and together we clear the way for the day to begin.

Throughout the suite, motivic melody passes intentionally among piano, bass and flute/ Morrissey handles its lyrical arc on “Catching Droplets,” the first movement to unveil the suite’s leitmotif in its entirety. “The bass [represents] the roots enjoying their gift of water from the fog,” says Nilsson. “The flute and piano represent the droplets falling from the canopy and running down the bark, making little rivers from the Redwood created rains.” Beautiful and somber, “Old Growth” features Morrissey’s arco as it engages the vocal quality of Nilsson’s flute song alongside atmospheric motion from Cowherd.

Nilsson composed “The Ground is Its Own” for First Nations “that belong to the trees.” The gesture spotlights nimble spontaneity between Nilsson and Cowherd. Charting the deep-rooted symbiotic relationship between the redwoods and fungal mycorrhiza, “Proof of the Unseen” feature’s Morrissey performing lyrical ornaments around Nilsson’s long-held melodies. “Epicormic” prompts an energetic current of improvisation that settles into an almost cyclical melody, exploring fire as a natural part of the redwood life cycle. “I wrote this [movement] in the midst of lockdown when I felt my world falling apart around me in a myriad of ways,” says Nilsson. “Even when the world around us burns, there are seeds for something new to come.” Cowherd and Morrissey proffer thoughtful solos on “Fairy Rings” before Nilsson and Cowherd take out a percussive variation on the melody.

“Coralie” opens in meditative warmth, unfolding in tribute to Nilsson’s niece, part of “the third generation to grow up calling these trees home.” The Coast Redwoods leitmotif emerges in the piano part on “Molted Steps,” one of the suite’s gentle yet kinetic movements. Intentional pauses and beats of non-playing reflect the feeling of walking along the fallen needles. “Suddenly you don’t hear your own feet anymore,” says Nilsson. “You feel the motion of it — you feel that things are moving — but it doesn’t sound like it.” When listeners hear “Hold On To Each Other,” the suite’s final movement, they encounter an unnamed familiarity in the resolution of the leitmotif: “It’s an exhalation. If we support each other we are all stronger. If we all hold on to each other, less of us are likely to fall.”

Nilsson ensures each leader release includes an element of written word. The Atlas of Sound series invites listeners into the expanse of her imagination through original poetry, providing them the option of gaining a different perspective on her music and her artistic expression. “The way poetry and instrumental music complement each other,” says Nilsson, “is that they can either focus or dispel a direction.

“Because of the abstraction of instrumental music, what I put out into the world doesn’t belong to me anymore. It belongs to the listener. That doesn’t mean that all of the thought and all of the processing and all of the growth…everything that goes into creating art is gone. It just means that it’s taking on its own life.”

Elsa Nilsson is a Flute Player, Composer and Educator from Gothenburg, Sweden currently residing in Brooklyn, New York where she can often be found playing at The 55 Bar, Bar Bayeux and other New York Jazz venues. She is Faculty at The New School College for Performing Arts where she teaches Rhythmic Analysis. Nilsson approaches music with an attitude of inclusiveness. She believes there is a space to be found in music that gives us the freedom to be exactly who we are. This leads her to make some unconventional choices in her compositions. The lines between styles become blurred and rules get bent in order to communicate the raw emotion that ties us all together. Nilsson draws inspiration from every aspect of life and music that moves her, combining them through the lens of Jazz to create a deeply personal expression that she hopes is universally relatable.