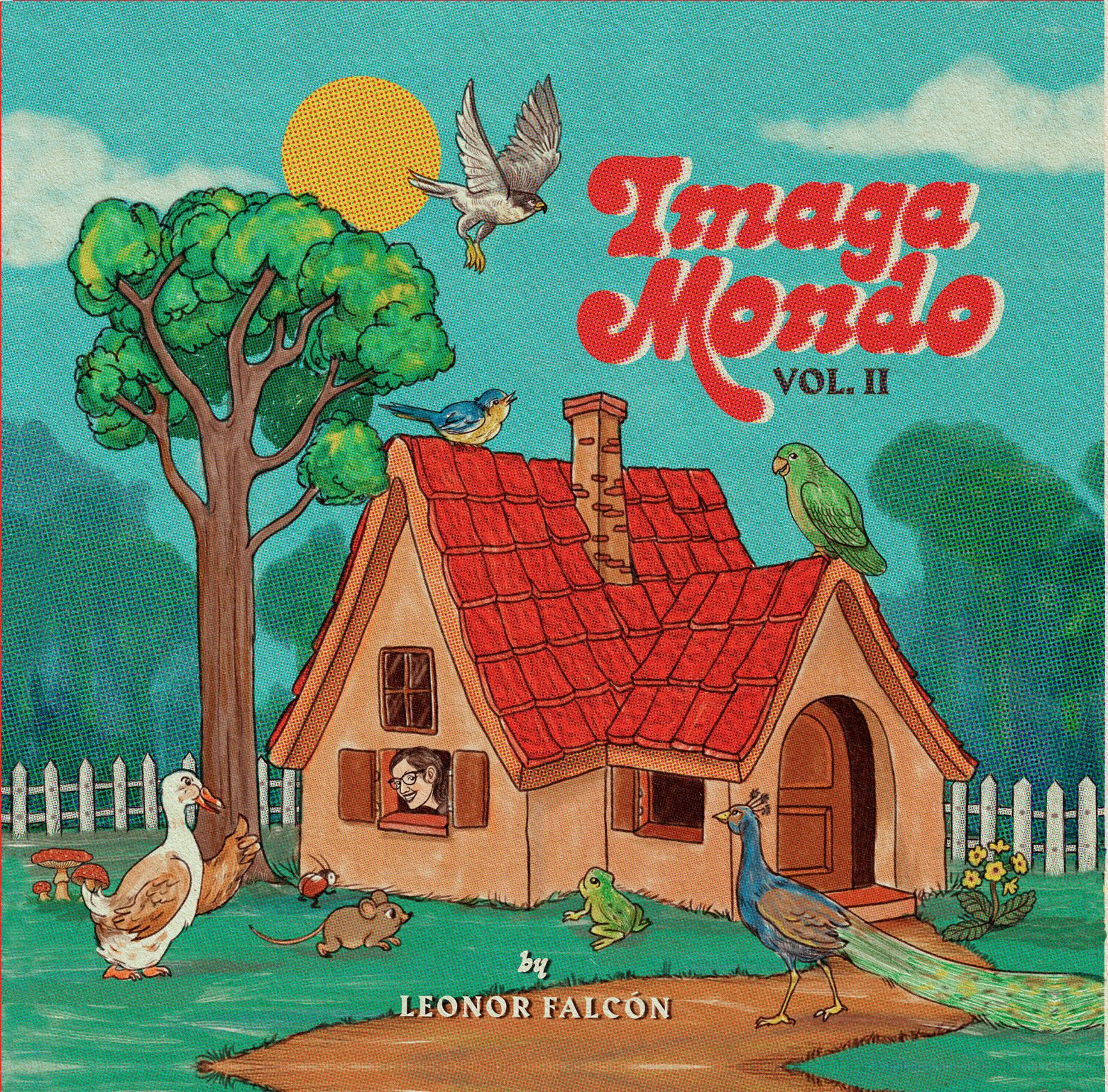 In 2017 when New York-based violinist and violist Leonor Falcón released her debut album as a leader Imaga Mondo (Imaginary World in Esperanto language), the stylistic diversity, DIY-production style and peculiar concept of the recording served to establish her as an iconoclastic composer and bandleader.  Falcón’s resume reveals a musician with a broad skill set.  A veteran string section player equally adept on viola and violin, she can be heard often in the string sections of such bandleaders as Camila Meza, Linda Oh, Akua Dixon, Karl Berger and Arturo O’Farrill among others. Falcón is also a key member of Sarah Bernstein’s Veer string quartet as well as Mimi Jones’s Black Madonna ensemble.

That open embrace of various musical traditions and styles was a staple of the first iteration of Imaga Mondo and continues on the second volume, Imaga Mondo Vol. II, which is slated for release on March 11, 2022 on FalconGumba Records. “The natural evolution of my life as a musician has required me to participate in so many different situations that I don’t feel an allegiance to just one genre or way of making music,” Falcón explains. “I love to explore a variety of approaches.” This approach is fully realized on her sophomore album, which further catapults the seasoned string player to new heights.

Imaga Mondo Vol. II features the three core ensemble members that graced her first: Christof Knoche on bass clarinet and alto sax, Juanma Trujillo on guitar, and Juan Pablo Carletti on drums and percussion. “It’s a very comfortable situation for me because they really understand my music,” reflects Falcón, who also praised that they are not “passive in the process”. A major difference between this and its predecessor is the addition of bassist Zachary Swanson, who fits like a glove with the rest of the group. “On the first record and during our live shows, Juanma and Christof took a lot of responsibility for the bass function in the tunes. With this new music I wanted to give them more choices. Zach is someone that I’ve loved playing with over the years and right away he seamlessly integrated with the band.”

The album opens up with an assertive phrase from Falcón’s viola on “Improv I”, displaying her deep and hefty tone almost, likened to a call to action to the rest of the band to which they respond immediately. Just like that, the listener is plunged into Falcón’s impressive imaginary world. The second track, “Para Emilio”, finds the band already in stark contrast to the introduction with a particularly lyrical melody. Written by Falcón shortly after she found out that she was pregnant with her first child, Emilio, this track is one of the album’s most personal. “Expecting during a pandemic was a transformative experience. It made me question many things including the way I’ve been approaching music so far.”

From that point onward, Imaga Mondo Vol. II takes listeners on a journey through a variety of moods and contexts. Pieces like “Cursing Parrots” and “A” find the band rocking out in intense explorations using electronics, while the ruminative “The Monks” or “Ballad for a Hawk” showcase the acoustic possibilities of the ensemble. All in all, the whole album has a rich orchestrational quality, producing a sound that appears more complex than the sum of its parts.

“Falcón’s music seeks more inside than outside, creating its own folklore and borrowing it at the same time,” says Carletti of the bandleader. In no piece is this borrowed folklore more evident than on the closer “Nita” a song that begins with an ethereal ambient aesthetic before quickly morphing into a cross between an Argentine chacarera and a Mexican son jarocho while still remaining in harmony with the rest of the album. “That piece is such a typical creation for Leonor. She didn’t set out to write a folk tune but upon playing it it immediately felt right to go there, and it’s really beautiful. She just synthesizes all the music she loves and it comes out of her with no agenda or pretension,” explains guitarist Trujillo. Indeed, the maturity in this music lies in the fact that Falcón has brought these compositions to life without any ostentation, and the musicians give themselves to the music without ego. This music isn’t trying to impress, but rather enrich.

Violinist and violist Leonor Falcón performs in New York City in ensembles that are dedicated to jazz, avant-garde, Latin and classical music. Some collaborations and performances include Willie Colon’s band, Akua Dixon’s Quartette Indigo, Sirius Quartet, Camila Meza and the Nectar Orchestra, Arturo O’Farrill Latin Jazz Orchestra, Maelo and the Latinoexperimental Project, Karl Berger Improvisers Orchestra, OKwarteto, Mimi Jones and the Black Madonna, Linda Oh’s Aventurine, Pablo Vergara, Michael Leonhart, Sarah Bernstein’s Veer Quartet, among others. Recent projects are Peach and Tomato, an improvising strings duo with violinist Sana Nagano (debut album The Ultimate Pairing, 2019), a solo debut album (2017), and CHAMA, a trio of jazz and avant-rock with a first record with releases in 2016, 2017 and three singles released throughout 2020 (all of these released on her label FalconGumba Records)

Leonor grew up in Venezuela where she was classically trained and played in orchestras from age 6. Her teachers were Ivan Perez and Virginie Roibilliard among others at the Emil Friedman conservatory and Mozarteum de Caracas. While in her home country, she was part of the acclaimed chamber music group Virtuosi de Caracas and was a member of the Orquesta Sinfónica de Venezuela, all the while honing her skills in jazz and improvised music. As a freelance musician she was active in the local music scene performing with many pop, rock, and latin groups as well as doing recording session work.

In 2007, Leonor was accepted to obtain her Masters in Music Performance at the Conservatory of Geneva, Switzerland, where she studied with Margarita Piguet-Karafilova. After graduation in 2010, she decided to pursue her passion for jazz and moved to NYC where she completed her Master’s Degree in Jazz Performance at Queens College in 2013. Her teachers were Antonio Hart, David Berkman, Christian Howes and Mark Feldman.

Leonor is endorsed by REMIC Microphones.