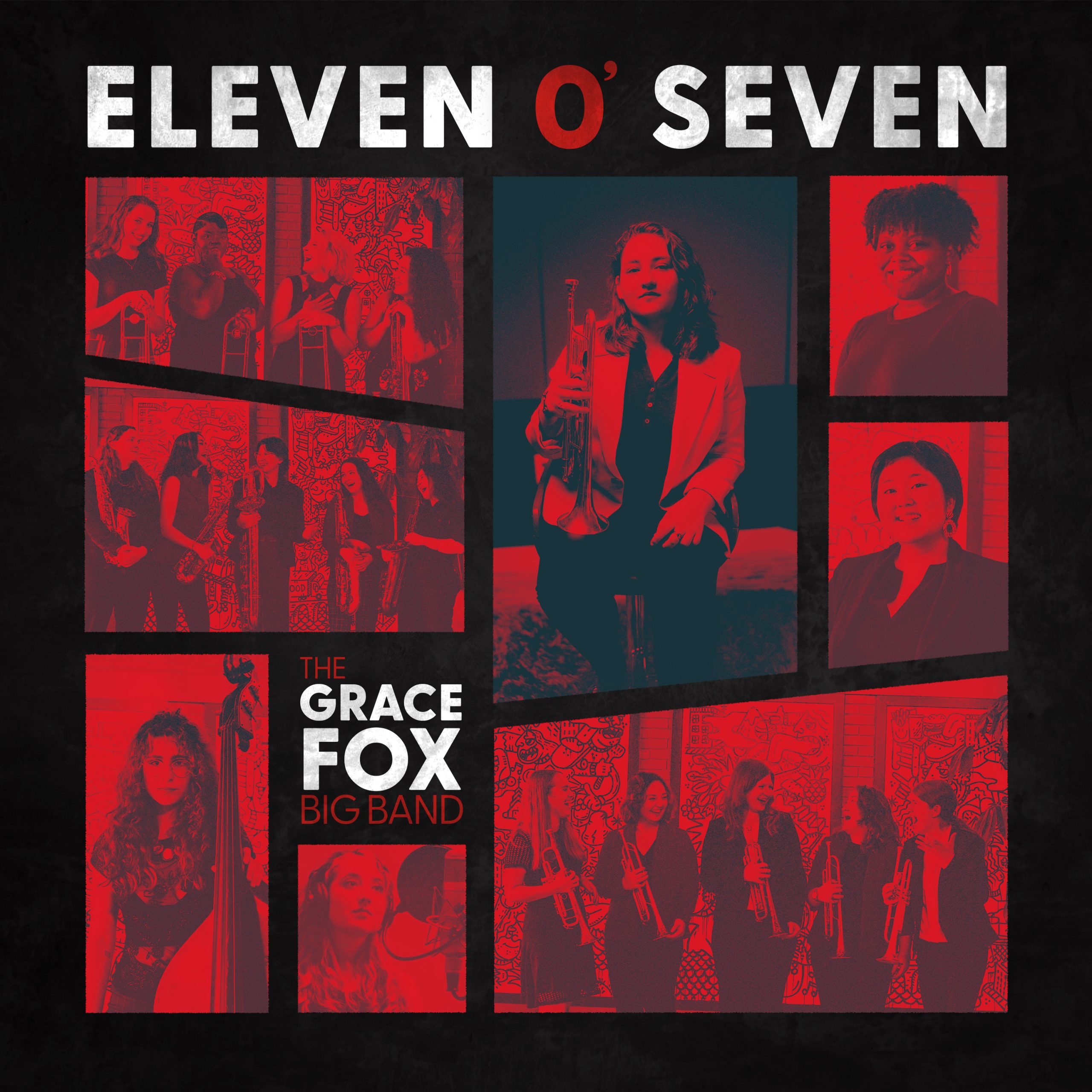 Next Level, an imprint of Outside In Music, in partnership with Blue Collar Records, is pleased to announce the March 11, 2022 release of Eleven O’ Seven, the debut album from rising trumpeter and bandleader Grace Fox. On Eleven O’ Seven, Fox premieres her powerful all-female ensemble, the Grace Fox Big Band. This multigenerational, multiethnic group ushers in the next era of musical ingenuity featuring some of the brightest young artists of our time. The album was recorded at Milkboy the Studio in Philadelphia over the course of four days in August 2021. On Eleven O’ Seven, Fox presents decidedly modern arrangements of innovative, insightful and hopeful compositions for a brighter future – and that future is female.

Fox remarks: “Growing up studying Black American Music it was very clear that jazz is a heavily male-dominated industry. Oftentimes I would be the only woman in an ensemble which would make me feel disconnected”. Fox found inspiration and empowerment upon first listening to the powerful all-female ensembles ‘The International Sweethearts of Rhythm’, and ‘The Diva Jazz Orchestra’. Fox was moved to create a big band of her own, an outfit that could feature some of the most formidable young female artists within the jazz idiom.

A student at the prestigious Manhattan School of Music, Fox sourced the players for the Grace Fox Big Band predominantly through social media. “I had met some of these musicians before, but for a good portion, this was the first time I had reached out, only sharing mutual connections. Some of these women came from across the country for this experience (made possible by Blue Collar Records) most having never met me in person. Everyone was so eager to connect and make music together which is a beautiful feeling to have within an ensemble,” Fox notes. The group is comprised of female musicians from different stages of life and from all across the country. Noa Zebley, the group’s baritone saxophonist, was entering her senior year of high school when recording this album, while the group’s lead trombonist Hailey Brinnel is an educator in Philadelphia. Despite the group’s diversity in age and background, the Grace Fox Big Band charges its way through potent compositions and stunning musical interchange as a powerful, cohesive unit.

Evidenced from the very first downbeat of the album opener “Right on Red”, the band’s enormous sound draws from classic big bands as well as from modern jazz influences such as Maria Schneider, Roy Hargrove, Brad Mehldau and Kamasi Washington. The laid-back groove opens the floor for sizzling solos from the horns, demonstrating some masterful interplay between the soloists and the group’s rhythm section. “The Gospel” introduces a soulful motif traded by the different sections of the ensemble and displays masterful dynamic sensibilities from the group. Fox borrows the changes to the classic composition “Strasbourg / St. Denis”, ending with an homage to the great Roy Hargrove. “I Just Found Out About Love” highlights the band’s versatility with a lush arrangement of the McHugh / Adamson classic. This vocal arrangement features guest vocalist and older sister of the bandleader, Alexis Fox. Alexis is also featured on the album’s closing track, “Stars”. The bandleader indicates “I originally wrote Stars as an accolade to her for being such a positive role model in my life.”

Two tunes that perhaps best exemplify Grace Fox’s compositional prowess are “Echelon” and “Sterility”. Fox began writing “Echelon” in March 2020 when the world first shut down. A senior in high school at the time, Fox composed this piece as a means to wade through the waters of uncertainty presented by that confusing period, informed by the stages of grief. The piece begins with a simple melody on the piano, the motif that carries us through the composition. The lead tenor picks it up with the piano and then the trombone and tenor two join, symbolizing the feeling of being “alone together”, each horn playing the isolated melody together. Fox indicates “An echelon is an arrow-shaped formation that geese make in the sky when traveling together. I felt like we were all in this echelon formation, traveling in the same direction and unsure of where we were going.” Later, the chart picks up and the motif is altered to add tension, highlighting the second stage of grief, anger. The chart ends how it began, accepting and embracing the new normal.

During the pandemic as musicians searched for ways to safely create music with other musicians, most found themselves playing music alone in their rooms, recording their instrument to a click track to be lined up with other player’s recordings.“Sterility” captures Fox’s distaste for this “sterile” method of music-making. “Playing to a click track alone in my room became depressing. I felt that my creative freedom was taken away during this time, as every note had to line up perfectly with a backing track. It was music under a microscope, everything had to be perfect which made the music itself sound sterile.” The piece has a constant pulse to emulate the click track, and a metronome was used while recording which can actually be heard by the listener in some sections. The end of the chart represents the frustration with the click track, and the last note is unresolved because we are still in this pandemic – the tension has not yet been released. Jade Elliott plays EWI on this chart, highlighting the use of technology in virtual music.

“As a woman in this industry, oftentimes we are afraid of being discriminated against based on gender. It was an amazing experience to see the other side of that. I am proud of how diverse the band is, having women of different races, ethnicities, sexualities, and backgrounds which helped to create a welcoming and supportive environment,” Fox exclaims. Introducing the world to the formidable Grace Fox Big Band, Eleven O’ Seven is a snapshot of jazz luminaries on the rise.