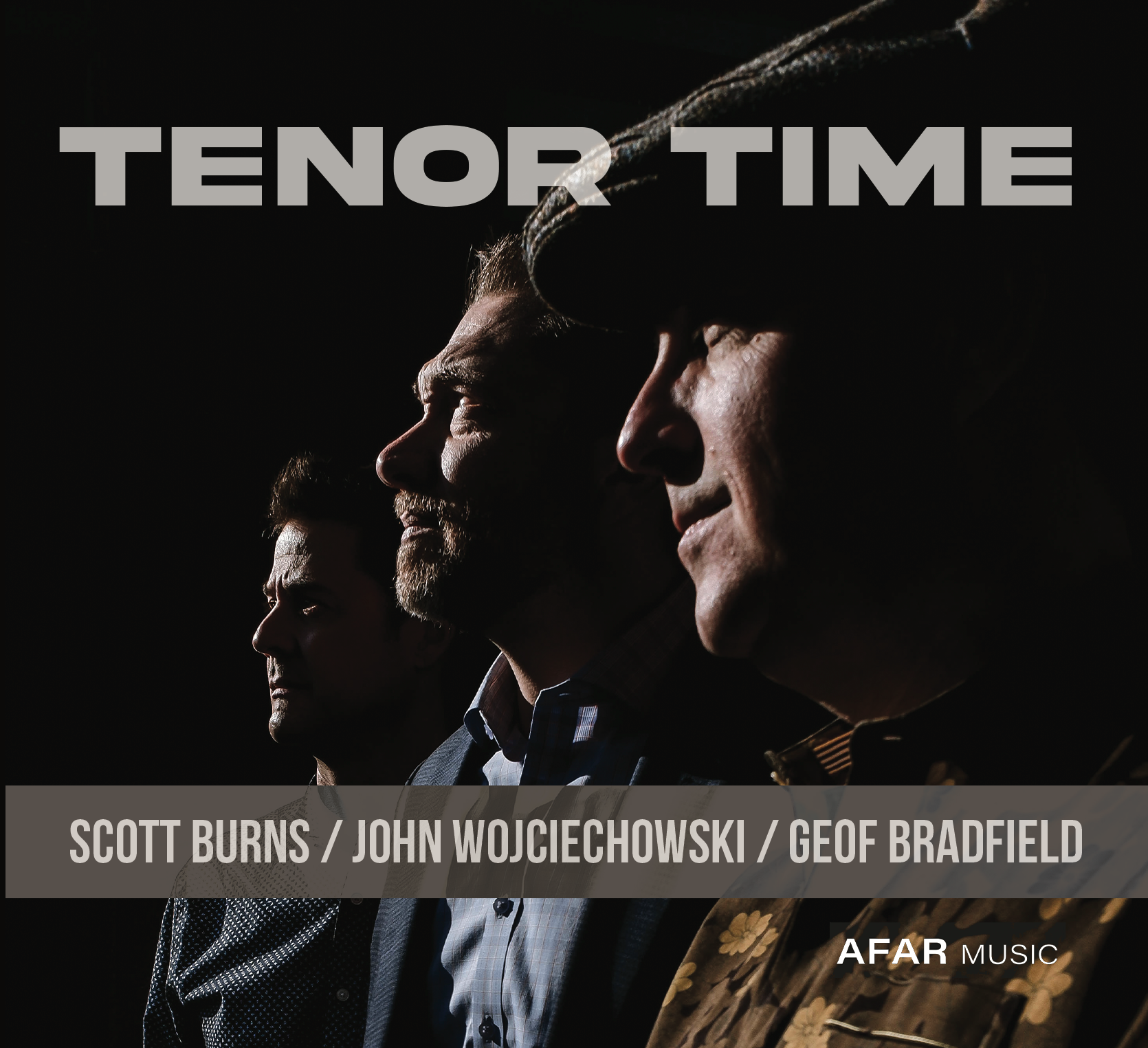 Jazz as a creative music and art form holds a heavy tradition of collaboration. From Charlie Parker and Coleman Hawkins, to Count Basie and Oscar Peterson, to Ray Brown’s “Some of My Best Friends Are…” series, jazz history is riddled with innumerable brilliant meetings of musical minds coming together to make something wondrous. In true continuation of this tradition, AFAR Music has brought together three of Chicago’s finest – tenor saxophonists John Wojciechowski, Geof Bradfield, and Scott Burns – to capture a moment of creative brilliance with their new release, Tenor Time, due out January 21, 2022.

Tenor Time follows on the success of Altoizm, the previous collaborative project spearheaded by AFAR Music. The label’s founder and album’s pianist, Richard D. Johnson, remarked that such collaborations are often spurred on by the “what if?” conversations of music fans calling for their favorite artists to share not just the bandstand, but the studio. “Over the years at different festivals and concerts this conversation often leads to the statement ‘I sure would love to see and hear these 2-3 musicians play together,’” Johnson tells. “One of our goals is to make this happen and the response has been overwhelmingly great from the musicians to the listeners.”

The lineup of personnel and recording process was brought to life by Johnson. After recruiting the three tenor saxophonists, they created an action plan for the music that would become Tenor Time. Harkening back to the spirit of historic sessions, the band decided they would each bring a handful of original compositions that could swiftly and immediately be put together with a focus on providing a creative vehicle for improvisation that allowed them each to demonstrate their unique voices as soloists and masters of musical dialogue. When they met to record at Johnson’s studio, they discussed a few details and then immediately began recording. This bandstand-like approach to the session allowed the group to maintain the freshness and energy of a live performance with the clarity of a studio session without ever losing the energy and excitement of every spontaneous twist and turn. The vivacious spirit was not left unrewarded as the ensemble successfully recorded the entire album in a single day, with almost every track recorded in two takes at most.

Musically, this album has the unique advantage of featuring the compositional styles of multiple band members, showcasing a variance and spectrum that keeps a listener’s mind and emotions thoroughly engaged. Valkyrie, the album’s opening track, was composed by Geof Bradfield to simultaneously highlight a memorable melody and unpredictable twists. The title is derived from a coincidence of date: the piece was composed on June 26th, the day that Wagner premiered the iconic Ride of the Valkyrie. “Valkyrie seemed a suitable title,” explains Bradfield. “It’s a tenor battle, after all, and in Norse mythology the Valkyrie choose the most valiant of those slain in battle to fight in Ragnarok.” Force Majeure, composed by Scott Burns, is a song whose title comes from the legal clause of the same name. Literally translating to “superior force,” a force majeure clause allows parties to be relieved of their contractual obligations under extreme circumstances. “Many musicians learned about force majeure in 2020 when their performance contracts were canceled due to the pandemic,” Burns says. “It seemed a fitting title both for the times and for the music: an assertive up-tempo melody line played by the three tenors with energetic underpinning by the rhythm section, and a solo form that lends itself to some vigorous blowing.” Jazz Folk Song, an original composition by John Wojciechowski, provides a tasteful contrast and shift of mood from the rest of the album. “The idea was to write a melody that had a folkloric quality to it with shifting harmony underneath,” says Wojciechowski. “I thought it would be a great vehicle for this project since it’s got a pretty wide-open harmonic landscape for the improvisation section.” Originally composed for his album “Lexicon,” the take of Jazz Folk Song on Tenor Time provides a newness to the piece that gives even familiar listeners a different perspective. Corea, the closing song on the album, is a piece composed by Richard D. Johnson in memory of the title’s namesake. Chick Corea was one of Johnson’s mentors and friends, and in the wake of his passing, Johnson began writing this piece. “I can only imagine what he would he have played on this song,” says Johnson, “but the great thing about him is he would always say ‘Let me hear what you have to say about it.’”

The collaboration process on this album was not profound only in the lineup of musicians but in the context in which it was recorded. Recorded shortly after the height of the 2020 COVID-19 pandemic, for some, this album marked the first major in-person creative project for over a year.  “I really, really, really missed playing music with people,” Burns says. “It was hard to navigate on a personal and emotional level. So I was thrilled to have something like this project coming out of it: to make the record, and have some sort of tangible creative output that is coming on the heels of what has been very difficult on a lot of levels.” For Wojciechowski, the hiatus during the pandemic provided an opportunity for reflection and an alignment of focus. “I think I have come to the realization that what I want to do is make music with the people who I want to make music with that’s musical and creative, and I want to spend my time and energy doing that.” Bradfield realized during the slowdown of the pandemic that he was approaching a point of musical burnout and saturation from overworking on things that he didn’t necessarily believe in. The past year and a half created a forced pause that ended with a triumphant celebration found in this recording. “Now one of my goals… is to channel my energies into the things that matter the most to me, musically and otherwise.”

In addition to the three headlining tenors, the band on Tenor Time is comprised of Clark Sommers on bass, Greg Artry on drum set, and Richard D. Johnson on piano and keyboards.

With Tenor Time, listeners find that two heads are better than one, and three is simply superb. Providing a glimpse into the possibilities of what can happen when apex musicians come together in joy with mutual respect for each other’s distinct perspectives and craftsmanship, Tenor Time leaves audiences enthralled and deeply curious as to what AFAR Music has in store next.