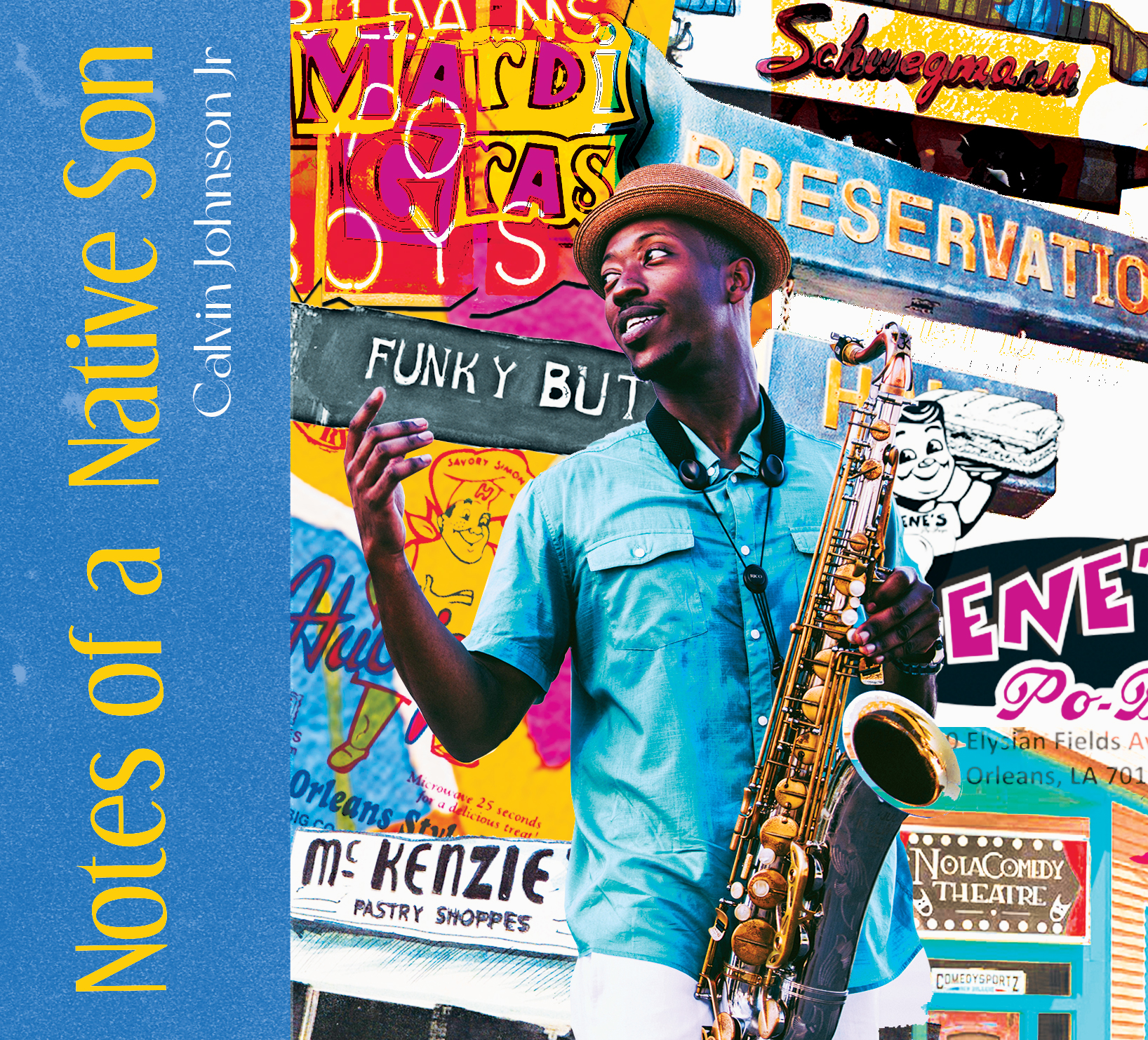 Saxophonist and Composer Calvin Johnson Delves Deep Into New Orleans Culture On His New Release Notes of a Native Son, due out February 18, 2022

Saxophonist, composer, and actor Calvin Johnson has been steeped in the history and tradition of one of America’s most iconic cities, New Orleans, since birth. A third-generation musician to inherit New Orleans’s rich cultural legacy, Johnson was raised on the bandstands of New Orleans, learning the foundation and nuance of the city’s music. Now, as a proponent of and mentor in the music of New Orleans, Johnson – along with his band – releases Notes of a Native Son, a tribute to his time and upbringing in the majestic city that shaped his craft.

Now a quintessential member of both the New Orleans and New York music scenes, Johnson makes it clear that his current mentality was not always the case. “I am now a mature man who has found his own voice,” Johnson says, “not by wandering aimlessly but by being guided by my mentors and soaking up all the knowledge, wisdom, and jewels they’ve imparted on me over the years.” Johnson believes firmly in the role his mentors – those great musicians of New Orleans who paved the way for him – have played in shaping him as a musician. During his time as a student in and of New Orleans, Johnson would step up to the bandstand nightly and learn in the most visceral and real way possible: by playing with the elders. As a member of the Preservation Hall Band and the Dirty Dozen Brass Band in particular, Johnson was provided an unmatched opportunity to immerse himself in the magic that consisted of both technical mastery and impassioned musicianship through rehearsals, planning, and performances. “I had a front row seat to true professionalism, and over the years I would take notes preparing for my time to step in the spotlight,” Johnson says.

Notes of a Native Son, through both its title and music, encapsulates this concept of continual learning. “The main concept of this album is an expression of a child taking the lessons he learned from his elders, internalizing those lessons, and then using them to find and develop his sound,” Johnson says. “As he moves from his sheltered upbringing to take on the world, this record is a manifesto of the musical experiences he’s gained along the way.”

Johnson’s third studio album as a bandleader, Notes of a Native Son is unique not only because of its stylistic authenticity, but also because it showcases Johnson’s skills as a composer. Embodying a depth of sound ranging from traditional second line to the emotive and history-rich Congo Square beats, Johnson presents a sound that is unequivocally New Orleans. “This sound still belongs to the streets and the people of New Orleans,” Johnson says. “And as they say on the streets of New Orleans, ‘If you ain’t gon’ dance, get the hell on out the way.’”

One of the strongest narratives and most addictive songs on the album is “Streetcar Love,” which tells a story that Johnson has maintained in his memory since childhood. Revolving around the iconic slow-and-steady method of transportation local to New Orleans, “Streetcar Love” follows the daydream of a young boy in which he meets his yet-unknown sweetheart on a streetcar. “Jewel’s Lullaby” was composed by Johnson when his daughter Jewel was a newborn. “When she couldn’t sleep at night, I would walk the hallway of our home with her in my arms singing this melody to her, hoping she would go to sleep,” Johnson says.  “Eventually I wrote that melody out and developed it into a song.” Johnson’s solo on this piece is vibrantly emotive, filled with the vast spectrum of feelings that accompanies the experience of being a new parent.

In addition to three original compositions by Johnson, this album also features two of his arrangements of iconic classics: Gershwin’s “Summertime” and fellow New Orleans native sons Fats Domino and Dave Bartholomew’s “I’m Walking.” The former showcases Johnson playing with tasteful feeling and empathy while still showcasing his virtuosity on the final cadenza.  “I’m Walking,” by contrast, finds Johnson in a completely different light as a vocalist and true entertainer.

While Johnson wrote and arranged the majority of the music on Notes of a Native Son, he credits his band for their integral role in the composition process. “I brought in my originals to the band as lifeless sheet music and they helped me bring that sheet music to life,” Johnson says. Peter Harris, bassist, is lauded by Johnson as a master of precision and professionalism. “He’s always going to stop us and make sure we’ve crossed all our t’s and dotted all our i’s and if we haven’t then he’s going to do it then and there,” Johnson says. Pianist Ryan Hanseler, Johnson says, lended his unceasing creativity to the project. “Whenever we find ourselves against a wall, musically speaking, Ryan comes up with the workaround.” Trenton O’Neal had a fresh, unique perspective on the music that makes him an invaluable asset. “It’s very inspiring to play with him as he hears things differently than I do,” says Johnson. The album also features drummer Alfred Jordan¸ who is heralded as a creative fount with “a well of ideas” and “a great memory.”

Pulsing with a scintillating vibrancy spurred on by the legacies of the great city of New Orleans itself, Notes of a Native Son is nothing short of remarkable. On his third album, Calvin Johnson demonstrates to listeners how the profundity of tradition can inform the deepest of emotions, the most vivacious of celebrations, and a musical ingenuity spurred on not only by one creative genius’s mind, but by the brilliance of all who walked the path before.

Notes of a Native Son releases independently on February 18, 2022.