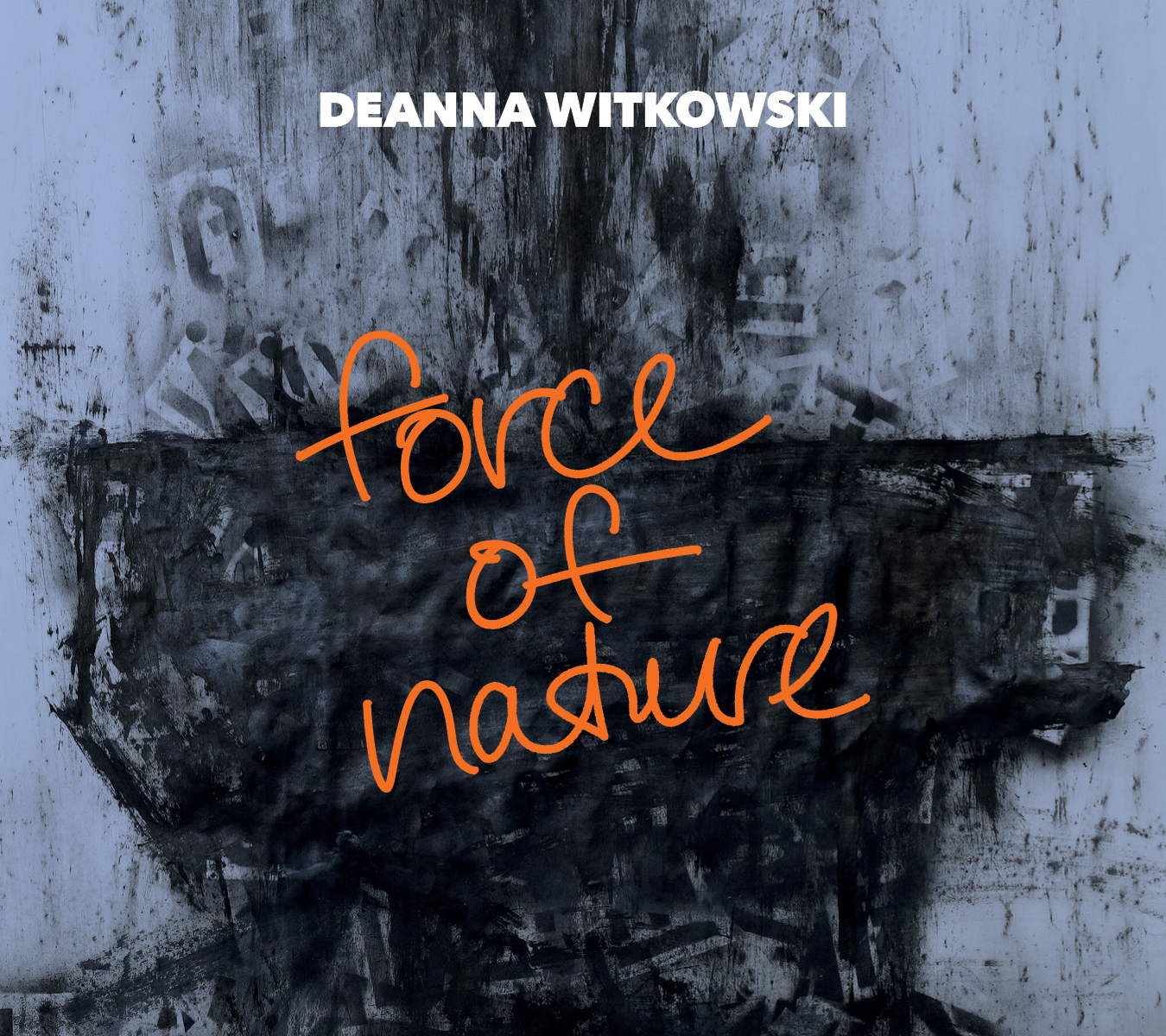 Pianist and Composer Deanna Witkowski Honors The First Lady of Jazz, Mary Lou Williams, on Force of Nature, due out January 28, 2022

On Force of Nature, her lovingly conceived and radiantly realized seventh album, Deanna Witkowski has created a multi-leveled masterpiece. Due out January 28, 2022 on MCG Jazz, the album displays her glorious musicianship and encyclopedic command of genres and techniques, while also revisiting the compositional genius of the major 20th-century artist Mary Lou Williams. The album also documents the firm musical and spiritual connection between Williams and Witkowski.

Released in the same year as Witkowski’s first book – Mary Lou Williams: Music for the Soul, her detailed and engaging biography of Williams – Force of Nature caps off 20 years of immersive research into the life and work of the woman called “The First Lady of Jazz.”

To fans and students of her music, Mary Lou (who died in 1981) stands tall as one of the best-known but still undervalued women in jazz history: a marvelous and harmonically intrepid pianist; a pioneering composer-arranger, admired (and hired) by Duke Ellington; an influential educator and early adopter of bebop; and one of the first jazz artists to infuse her music with her Catholic faith, most notably in three jazz Masses.

To the well-traveled and exhilarating pianist-composer Witkowski, Mary Lou is all those things and something more: an inspiration, certainly, but also a guiding light – and, in absentia, a life coach for the deeply religious Witkowski, whose own resume includes an impressive number of award-winning sacred-music compositions. “I think of Mary Lou as a mentor, because she’s someone who was able to really integrate her spirituality, her Catholicism, with her music,” says Witkowski.

Most of the tracks on Force of Nature were written by Williams. Among them are several movements from the most famous of her extended compositions, the 1945 Zodiac Suite, including an ingenious mashup of the movement titled “Cancer” and “Act of Contrition,” from the late-60s Music for Peace. On “Stompin’ at the Savoy,” which Williams did not write, Witkowski refashions this Swing-era classic into a languorous ballad, well suited to reflect three events that affected Williams’ life and career in the early 40s: her move to Sugar Hill in Harlem, the closing of the Savoy Ballroom, and the 1943 Harlem Riots.

On another album highlight, Witkowski crafts a small medley from the 1938 big-band blues “What’s Your Story, Morning Glory” (one of Williams’ earliest triumphs) and the contemporaneous but little-known “Ghost of Love”; what starts as an achingly soulful trio meditation leads to a wide-ranging, effortlessly flowing and occasionally rhapsodic piano solo. Meanwhile, the title track – the only Witkowski original in the set – channels the vivacity of Mary Lou’s entire oeuvre into a driving Latin beat colored by Witkowski’s genre-spanning expertise.

Over the last two decades, Williams’s music has become an ongoing source of study and interpretation for Witkowski, finally leading her to a new hometown and a side career as a biographer-academic, currently working on her Ph.D. in jazz studies at the University of Pittsburgh.

Actually, the book came before the album. In 2019, when Witkowski first sojourned in Pittsburgh to research Mary Lou’s life, she met with guitarist Marty Ashby, the driving force behind the jazz program at Manchester Craftsmen’s Guild and the MCG Jazz label. “I was telling him how the research was going and said, ‘It’s really a shame that I have this book coming out but I don’t have any recordings of myself doing Mary Lou’s music’ – which I have been playing a lot, for quite a while. So Marty said, ‘Well, we should do something about that.’ So that’s kind of how it started.”

The original plan, to record these tracks in May 2020, collapsed under the COVID-19 surge. And by the time of the postponed recording date, in January 2021, circumstances had changed considerably. “It was pretty amazing that we could do this at all,” Witkowski says, “because by then I had moved to Pittsburgh; my drummer, Scott Latzky, was in New York; and my bass player, Daniel Foose, had moved to Austin. But they all came in, and then [trumpeter] Clay Jenkins came down from Rochester, New York.” Pittsburghers Roger Humphries (drums) and Dwayne Dolphin (bass) worked on three tracks as well.

Before embarking on the biography, Witkowski had visited Pittsburgh only once, when she was booked to play a solo piano concert in the city. She arrived more than a week early in order to begin her research in Mary Lou’s birthplace.  “I just started meeting a ton of musicians, and sitting in a lot and – and I felt that the jazz community here is so supportive. They come out to gigs, and I was embraced as part of the community pretty quickly.

“So then I started getting more work opportunities, like playing with the Pittsburgh Symphony, doing some of Mary Lou’s stuff, and doing some teaching for the Catholic diocese. And then in the fall of 2019, I decided to live here for seven weeks to continue my research.” She found more breathing room in Pittsburgh, especially compared to New York, which provided little time to relax and reflect.

Witkowski’s subsequent move to Pittsburgh has placed her in even closer touch with Williams, spiritually and, as it turns out, physically as well. “I now live exactly a mile from Mary Lou’s grave site,” she marvels, a fact unknown to her when she bought her house. “I walked there about six weeks ago, and the GPS led me exactly to her grave site. I really have felt, and I still feel, that Mary Lou has guided me here; I feel like she’s a companion. So it’s pretty meaningful to me to be able to do things like visit her any time I want.”

Born in New Hampshire, Witkowski attended high school in Rochester, NY, where she took classical piano lessons at nearby Roberts Wesleyan College. When she arrived at Wheaton College outside Chicago, she had no experience playing jazz, but was eager to learn. Wheaton had no jazz piano teacher, though; so Witkowski used her training as a flutist to learn the saxophone and join the college’s jazz ensembles.

Private instruction in improvisation followed. Witkowski attacked the challenge with her customary diligence, and quickly found gig opportunities around Chicago while attending DePaul University. In 1997 she moved to New York, supporting herself as a church music director and composer as she continued to hone her jazz skills. In 2002, five years after her move, she won the Great American Jazz Piano Competition.

Witkowski’s interest in Mary Lou Williams was sparked by the legendary jazz pianist and educator Dr. Billy Taylor, who asked Witkowski to perform at the 2000 Mary Lou Williams Festival at the Kennedy Center in Washington, D.C. At the time, Witkowski knew next to nothing of the festival’s namesake. “I had heard Williams’s name, and knew that she had been a pioneering jazz musician who had mentored Charlie Parker, Bud Powell, and Thelonious Monk,” Witkowski has written, “but I had not yet listened to that much of her music.”

While the term “Force of Nature” certainly suited Mary Lou Williams, it’s been accurately applied to Witkowski as well. She has studied Cuban music with Chucho Valdes and Hilario Duran; learned Portuguese to improve her phrasing of Brazilian music; and in 1996 spent three months teaching music in Kenya, which expanded  her rhythm vocabulary. She has also delved into the work of Frederic Chopin, performing her arrangements of his works next to improvisations inspired by him, in concerts and on the justly praised album Raindrop: Improvisations with Chopin (2014). Critics have consistently lauded the ease with which she moves among classical, jazz, Latin, and sacred music.