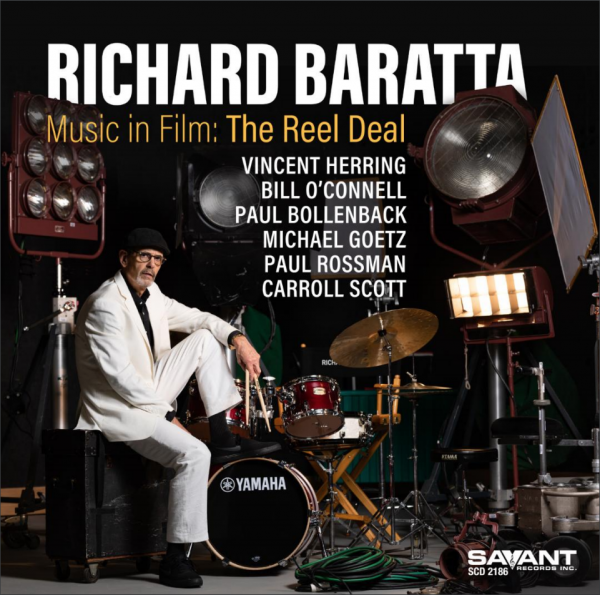 “Chopsticks” is nominated for Best Arrangement, Instrumental or A Cappella at the 64th GRAMMY® Awards

New York, NY – “Chopsticks,” the fourth track off of drummer Richard Baratta’s album Music in Film: The Reel Deal, which was released in September of 2020 on Savant Records, has received a GRAMMY® Nomination for Best Arrangement, Instrumental or A Cappella. The song was arranged by the record’s music director, the masterful jazz pianist Bill O’Connell. The 64th annual GRAMMY® Awards will take place on January 31, 2022 in Los Angeles.

Baratta, who has spent over three decades as a Hollywood film producer, celebrates the coalescence of his two artistic worlds of film and jazz on Music in Film, an assortment of songs notably used in major motion pictures such as Mrs. Doubtfire, Midnight Cowboy, Big and The Wizard of Oz. O’Connell’s killer Latin arrangement of the Euphemia Allen composition “Chopsticks” is a tribute to the classic Tom Hanks-Robert Loggia piano dance scene from the movie Big which Baratta also worked on. On the track, the band blazes through a bright-tempoed montuno, adding melodic and rhythmic intrigue to the classic piano piece.

“It’s always fun for me to conceptualize a song in a way that no one has ever heard it,” O’Connell shares. “That was my thought when Richard Baratta asked me if I could arrange “Chopsticks”… I surrounded the tune with a deep Latin vibe, a few new harmonies and melodies and the band gave a great performance. I am so appreciative of this Grammy nomination.”

“For this album to be nominated for a Grammy… well that’s off the charts,” Baratta added. “‘Thrilled’ falls far short of describing my emotion.”

Baratta’s dazzling work across so many artistic genres over the years has not gone unnoticed. He was recently interviewed by Jazziz Magazine to discuss his music portfolio and film production credits, which include the Academy Award nominated films The Irishman, Donnie Brasco, Joker and The Wolf of Wall Street.

Pianist Bill O’Connell has enjoyed a 40-year long career as a leader, soloist, arranger, musical director, and accompanist for some of the most celebrated names in jazz and Latin music including Sonny Rollins, Chet Baker, Mongo Santamaria, Gato Barbieri, and Emily Remler. O’Connell is a four-time recipient of the “Jazz Writer of the Year” award from SESAC, the performing rights organization and is presently a member of the jazz faculty at Rutgers University. His upcoming album, A Change Is Gonna Come is slated for release on January 28, 2022 via Savant Records.

Richard Baratta and Bill O’Connell are represented by Redwood Entertainment.