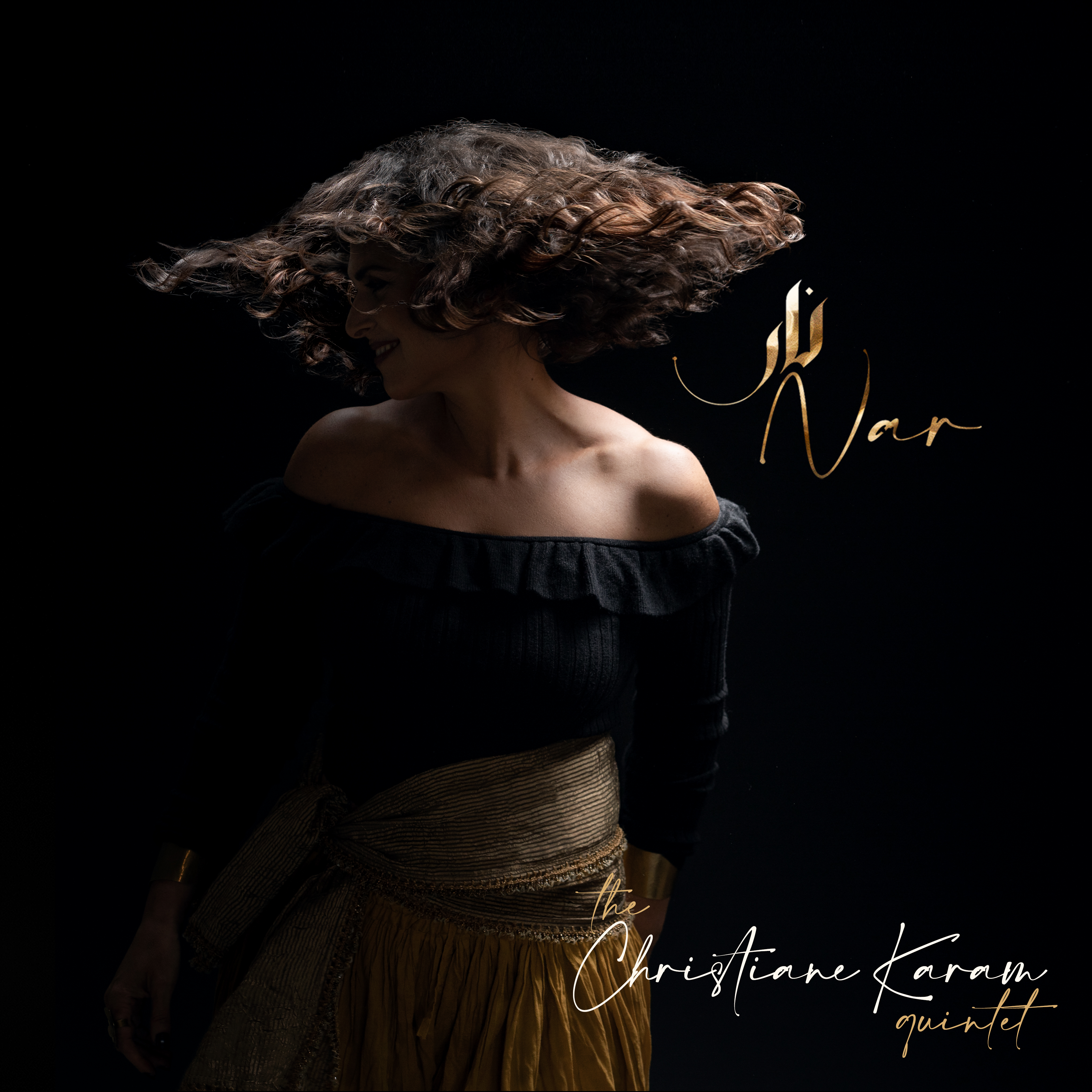 Christiane Karam melds Middle Eastern and Balkan aesthetics with contemporary jazz on Nar, a tribute to her native Beirut and the resilience of humankind, due out January 28, 2022

Vocalist and composer Christiane Karam is thrilled to announce the January 28, 2022 release of her new full-length album Nar. Drawing from a deep well of lived and musical experiences, the Beirut-native’s first release in nine years is a multilingual musical tapestry meant to inspire and uplift in arduous times. Karam has called in her accomplished quintet made up of renowned pianist Vadim Neselovskyi, virtuosic cellist Naseem Alatrash, first-call bassist Peter Slavov and GRAMMY-winning percussionist Keita Ogawa. While her vocals take center stage, Karam also performs here on the tupan and bendir drums. Nar will be released independently as a CD, digital download and limited edition vinyl LP.

Born and raised in war-torn Beirut, Lebanon, Christiane Karam’s unique vocal style stems from her love for different musical traditions. Based in Boston and New York City since 1998, Karam has consistently found creative and compelling ways to combine the musical traditions of her Lebanese and Armenian heritages with modern jazz and other contemporary styles. She is the founder of the award-winning ZiZALA Ensemble (which has been praised for its expert blending of Middle Eastern and Balkan folk music and jazz) and the leader of the critically acclaimed Pletenitsa Balkan Choir. At Berklee College of Music, where she is on the faculty, she founded and directs the Berklee Annual Middle Eastern Festival. She has traveled around the world performing and teaching her ‘Voices’ workshop, and is also known for her work as a co-facilitator of the Circlesongs workshop alongside Bobby McFerrin and his team at the Omega Institute.

Nar, Karam’s fourth recording but first with her quintet, represents a pivotal moment for the artist as it is her most fully realized project to date. Karam describes the time leading up to recording Nar as particularly introspective, as she felt her artistry was developing in new and compelling ways. “Something was shifting and it was time to document who I was now becoming, both as an artist and a composer,” Karam shares. While previous works took on a choral and bigger ensemble approach to composition and improvisation, she felt it was now time for a more intimate take on the voice in a raw quintet setting. With Vadim Neselovskyi on board as Associate Producer, the contour and timeline of the project started emerging in 2019. They intended to go into the studio in the Spring of 2020, but then the pandemic hit.

The isolating and detrimental effects of the moment were further exacerbated when tragedy struck Karam’s hometown Beirut in the form of the 2020 Beirut Explosion. In August, a large amount of ammonium nitrate stored at the Port of Beirut exploded causing a deadly blast that killed over 200 people, and led to over 7000 injured persons. One third of the city was destroyed that day, and the mass-devastation left a lasting imprint on Karam. During these particularly difficult times, she felt solace in creating music, and continued to chip away at her new album. “This work was the lifeline that kept me buoyant when most of our inner and outer worlds, along with many global narratives were collapsing onto themselves,” she reflects. Shortly after the blast, Karam and her band finally made it into the studio to record what would become a career milestone. “The process of making this record in the midst of the pandemic and the tragedy in Beirut was raw, exhilarating, childlike and profound all at once.”

Nar takes its name from the Arabic word for “fire”. While the title alludes to the tragic event that took place that day in Beirut and is a tribute to those that lost their lives, it is also intended to be joyous and uplifting. Nar is a celebration of resilience, connection, and the triumph of the human spirit in the face of adversity. Over the course of 13-tracks, listeners are treated to Karam’s take on common themes shared amongst humanity such as love, grief, belonging, overcoming and starting anew. It spans five languages (Arabic, French, English, Bulgarian, and Armenian), all stemming from Karam’s native and adopted homes. Musically, Nar has a lot to offer. With improvisation at its heart, the pieces range from Karam’s exhilarating original compositions to re-imagined traditional material from different folk traditions and vary in mood from wistful and reflective to rhythmic and bold. Modal and rhythmic concepts commonly found in Eastern music meld seamlessly with lush jazz harmonies and a Western classical aesthetic.

One of the highlights on the record is “Beirut”, the album centerpiece composed immediately after the blast. It is dedicated to the victims and their families, as many of the casualties were Karam’s childhood friends and neighbors. It is prefaced by ‘Interlude #1’; poetry that Karam wrote in the aftermath of the explosion over an exquisite solo by Keita Ogawa. The music video, which can be viewed here, is masterfully narrated by director Francesco Gargiulli and tells the poignant story of the human cost of war and violence, not only in terms of the body count, but also in terms of the inner death that occurs in the aftermath of such unspeakable devastation.

Another standout moment is the track “Voyage”, which is a joyous exploration of Western harmonies, Balkan rhythms and Eastern scales. It brings listeners on an ever-winding road to unexpected places. A rich blend of contrasting textures, the piece is prefaced by “Interlude #2”: a vocal-piano improvisation that showcases unbridled creativity and unwavering commitment to the moment, as well as the deep musical connection Karam shares with Neselovskyi. “Haneen” is another high point of Nar. Co-written with the illustrious Brazilian father-daughter duo Sergio and Clarice Assad, “Haneen” tells the poignant tragedy of the immigrant story and is augmented by the affecting poetry of Gibran Khalil Gibran.

With Nar, Christiane Karam aims to celebrate the trials, tribulations and triumphs of peoples on an interconnected journey together. “I hope this album speaks to you, in these times of reckoning, healing and rebuilding,” she shares. “The freedom is in the dance.”

The album is dedicated to the memory of Bassam Saba, beloved artist, teacher and friend.