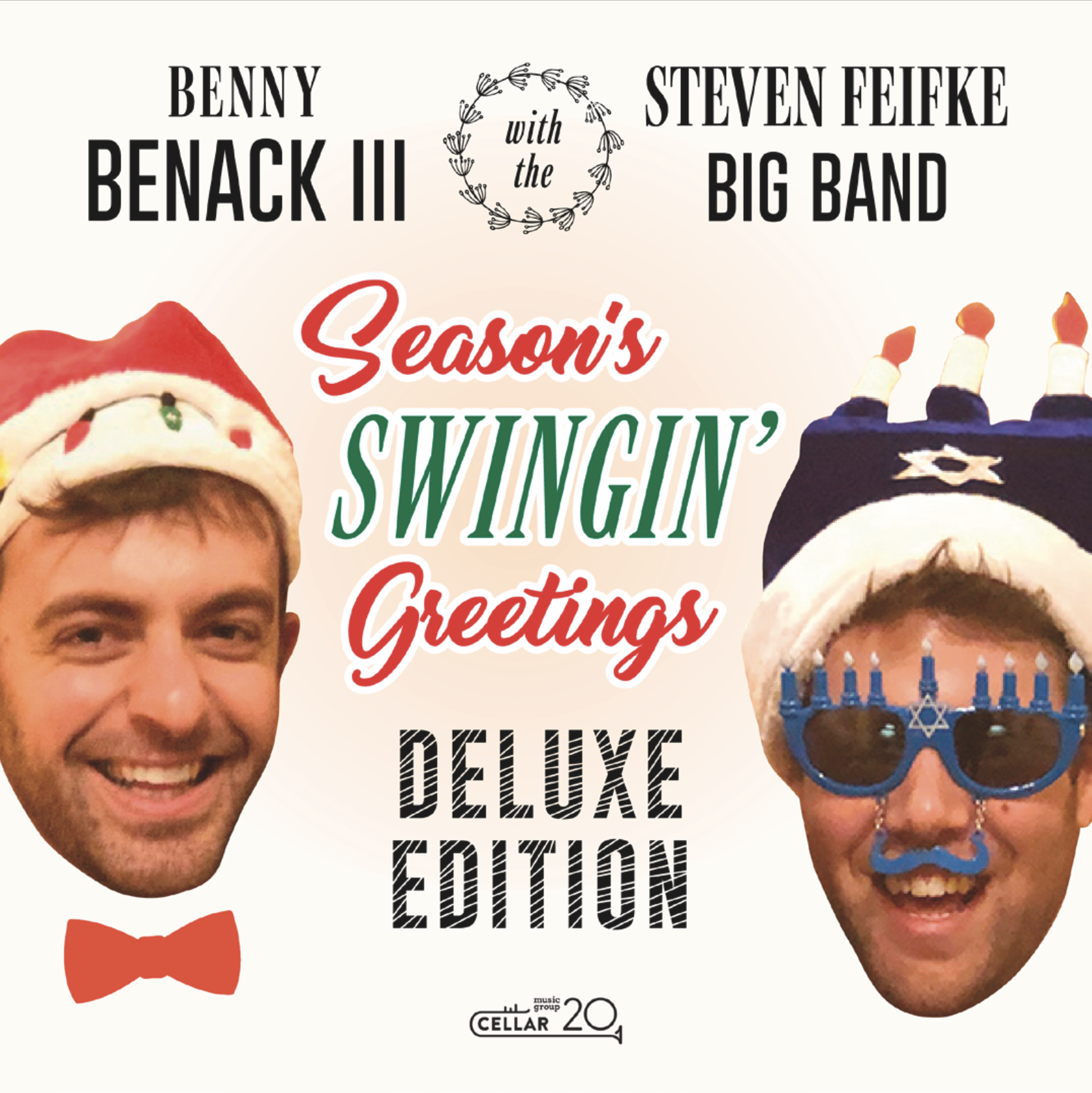 “There’s an attractive mixture of sincerity and humor to be found in the way this crew addresses the holidays, but don’t let the lightheartedness fool you: The musicianship is serious, and seriously on point.” —Dan Bilawksy, All About Jazz

Cellar Music Group is thrilled to announce the November 19, 2021 release of Season’s Swingin’ Greetings, a holiday album that celebrates the traditional big-band sound and hallmark compositions of yesteryear while also introducing brand-new pieces and arrangements to the holiday jazz pantheon. Acclaimed trumpeter and Vocalist Benny Benack III joins forces with heralded pianist and big-band leader Steven Feifke, marking the first release as co-leaders for these two close friends and long-time collaborators. This auspicious holiday recording sees the inimitable confluence of Feifke’s compositional/arranging prowess and Benack’s lyrical pen, yielding rousing arrangements of timeless holiday classics as well as original compositions written in the spirit of the season.

This Deluxe Edition package of Season’s Swingin’ Greetings is the culmination of a 3-year process, built on the vision of composing, recording and refining holiday jazz anthems for a new generation. With some tracks initially released as an EP for La Reserve back in 2019, Feifke and Benack utilized their time during the COVID-19 lockdown to continue to record additional tracks for the album, adding lush string arrangements and additional moments of levity and expert instrumental performance. Feifke recalls the exhilarating week leading up to the 2019 recording session, when Feifke and Benack were sharing a Manhattan apartment. “Benny would run down the hall, knock on my door and tell me that he finished the lead sheet for the next track right as I finished arranging and orchestrating the previous – it was a real tin-pan alley kind of atmosphere,” recalls Feifke.

While Season’s Swingin’ Greetings marks Feifke and Benack’s first release as co-leaders, the two have a long and fruitful history of collaboration including on Feifke’s most recent critically-acclaimed release Kinetic, which featured Benack prominently alongside Feifke’s big-band. About that outing, Jack Bowers of All About Jazz notes, “for those who appreciate contemporary big bands whose guiding purpose is swing, Kinetic should furnish ample excitement and pleasure. If Herman, Basie and Buddy Rich were still around, it is reasonable to surmise that this is the path they would have followed.”

“Benny is such a brilliant lyricist. The stuff that he comes up with is nothing short of virtuosic – and so for me to be able to jump in and contribute my compositional and orchestrational voice is  fantastic. It’s  a really great match in terms of both of us complimenting each other’s artistic  skill-sets,” Feifke reflects.

The co-leaders will release three singles including a October 29th release of “Sleighride”, the November 19th release of “Ma’oz Tzur” and the December 17th release of “When Christmas time Comes Around”. The classic “Sleighride” was co-arranged by Benack and Feifke. This sprightly arrangement demonstrates Benack’s lightning-fast facility on the trumpet, soaring over Feifke’s thoughtful harmonic refrains. Feifke displays his immense melodic acuity as well with a sublime solo. The triple-meter bridge and melodic playfulness from the duo sets the stage for a truly innovative release. “Ma’oz Tzur” is a modern arrangement of a traditional Jewish liturgical poem, the duo bring this Chanukah classic into present day with a 3/4 power-ballad feel within a marvelous big band and strings arrangement.

“When Christmas Time Comes Around” is a joint composition between Feifke (music) and Benack (lyrics), the two worked together to craft this holiday story and interpret it in song. “This album was filled with firsts”, Benack indicates, “this was the first time that I’d ever written lyrics for jointly-written piece”. “My Girlfriend is an Elf” is the album opener, a jubilant and comical vocal showcase for Benack. The vocalist notes “My Girlfriend is an Elf is a tune where the verse [setting up the premise that his girlfriend is an elf] came to me first.”

“My Wishlist is You” features a wonderful performance from vocalist Alita Moses alongside Benack. Benack composed and wrote the lyrics for this Christmas-themed waltz. Moses was also featured in a duet context on Benack’s recent critically-acclaimed album A lot of Livin’ to Do. The outfit returns to the Chanukah spirit for “The Dreidel Song”. Feifke’s arrangement harkens back to the spirit of the craps game in ‘Guys and Dolls’, fitting for a reimagining of a traditional song based on a gambling game.

Aside from the two esteemed co-leaders, Season’s Swingin’ Greetings features an array of notable musicians throughout its tracks. Vibraphone great Warren Wolf takes a wonderful solo on the classic “What Are You Doing New Year’s Eve”, Sasha Berliner is featured on “The Christmas Song”, acclaimed multireedist Alexa Tarantino is featured during a flute solo on “When Christmastime Comes Around”, saxophonist Sam Dillon is a featured soloist on “The Dreidel Song”, celebrated trombonist Javier Nero is a featured soloist on “I’ll Be Home For Christmas” and drummer TJ Reddick is featured on “Sleighride”.

Season’s Swingin’ Greetings captures the tremendous synergy and interplay between two close friends and collaborators dedicated to creating a perfect atmosphere in which to compliment one another. Benack notes “I consider the bond between a crooner and his arranger to be as sacred as it comes in the annals of Jazz music…Sinatra had Nelson Riddle, Mel Tormé had Marty Paich, and I’m grateful to have Steven Feifke’s pen providing the musical wind in my sails. I wouldn’t entrust my music and arrangements to just anyone, but with Steven we have complete trust in each other, and really share a similar vision for how we want to present this familiar format in a fresh, exciting way.” A modern-classic, Season’s Swingin’ Greetings celebrates the holiday music of multiple religions, and adorns each track with an infectiously jubilant energy fitting for the upcoming season.