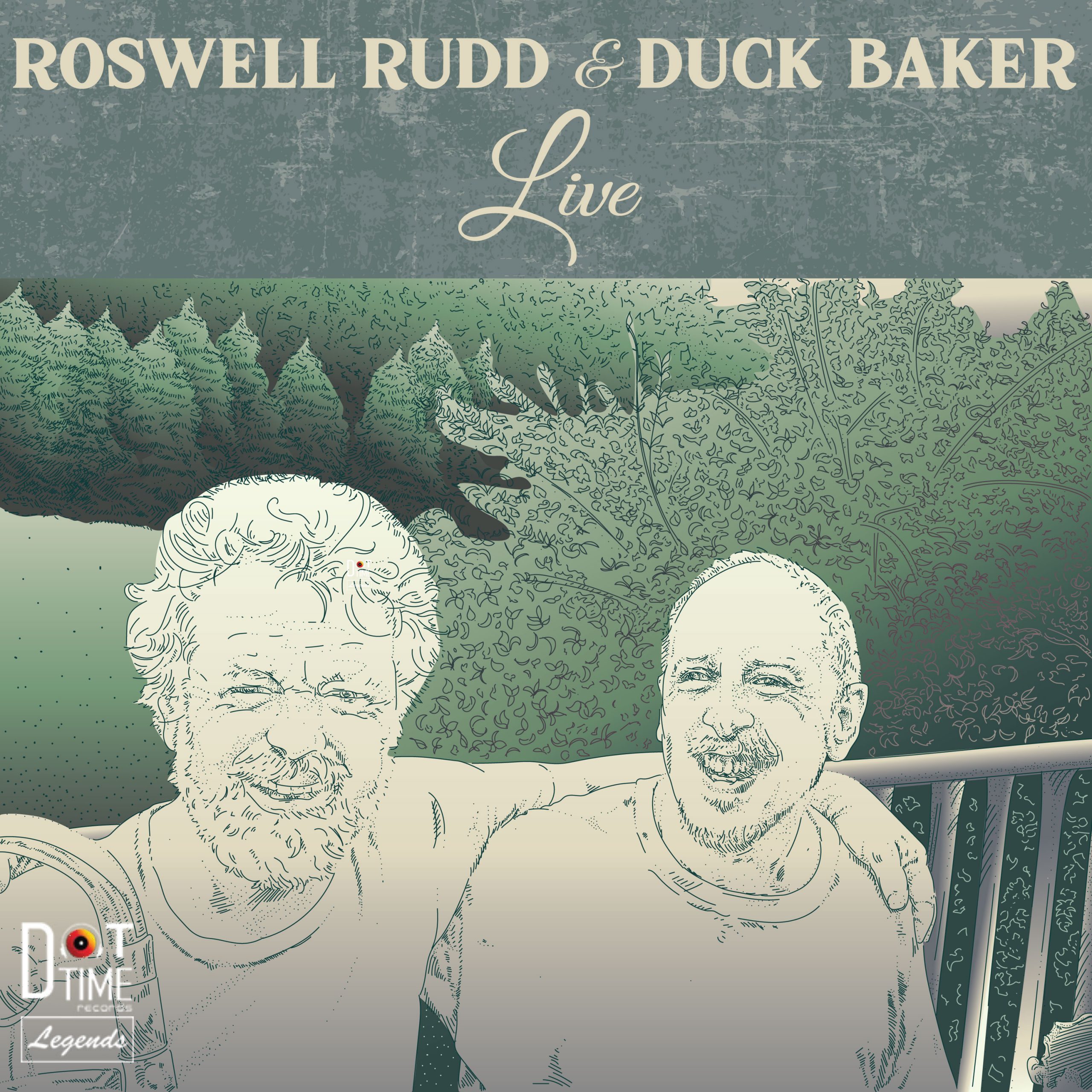 Dot Time Records is proud to announce the release of Live, an intimate collaboration between legendary jazz trombonist Roswell Rudd and celebrated guitarist Duck Baker. The unlikely combination of trombone and guitar is presented here with ease, finesse, and a stunning balance indicative of a duo outing of the highest caliber. This limited edition, hand-numbered vinyl LP will be available on November 26, 2021. The album will also be available as a limited edition compact disc, and also available digitally.

This exciting, pared-down recording allows audiences to hear Rudd at his most empirical and innovative. The late pioneer of avant-garde jazz enjoyed a career that spanned over sixty years and saw fruitful collaborations between Rudd and such icons as Gil Evans, Cecil Taylor, Archie Shepp, Don Cherry, Carla Bley and Charlie Haden. The trombonist and composer is heard here alongside Baker, one of the most highly regarded fingerstyle guitarists of his generation, who pulls from his varied experiences in blues and folk music to create his signature fingerstyle sound. On this vinyl release, the duo offers thoughtful and potent interpretations of hallmark compositions by pianists Thelonious Monk and Herbie Nichols.

Captured here are two masters at work, each drawing from their own respective pots of experience. Some of it is shared; Both Baker and Rudd have ties to traditional jazz. Rudd used to remark that the on-the-spot polyphony of a trad-jazz band was perfect training for free jazz. “In the heart of it, for all music, is playing off each other and being aware of each other, having that call and response going on collectively is what makes the sound.” Baker and Rudd’s rich background in the improvisational, unpremeditated counterpoint that hailed from both the trad-jazz and avant-garde traditions is perhaps the reason for the unparalleled synergy and interplay that takes place on each track of this release.

Baker notes “I got to know Roswell Rudd’s music as a teenager in the mid-1960s. He was on the very first free jazz record I ever heard, Archie Shepp’s Four For Trane, and shared front line duties on the incredible New York Art Quartet LP on ESP-Disk’. I followed his recording career as closely as I could from then on.” It was not until 1996 when Baker was doing research for his release Spinning Song: Duck Baker Plays the Music of Herbie Nichols that Baker and Rudd would connect. Baker remarks, “I was nervous about calling one the heroes of my youth for help, but Roswell demonstrated endless patience and the willingness to answer countless questions about Nichols, the musician and the man. We finally met in person in 1999, when Roswell came to San Francisco … Of course I was thrilled when he invited me to visit him and his partner Verna Gillis in New York with the idea of playing music together.” What resulted from this meeting was the concept of embarking on some exciting, sonically-unchartered territory. “The trombone – guitar combination is naturally a tricky one, but Roswell always regarded any possible difficulty as a challenge.”

The stellar audio that makes up this vinyl set was recorded live at two performances from the great duo – tracks 1-2 and 6-8 were recorded at The Outpost in Albuquerque, NM in 2004 while tracks 3-5 and 9-10 were recorded at Tonic in New York City in 2002. Dot Time Records honorably brings this meeting of the musical minds to light for the first time on record.

Musically, Live is a collection of eight trombone-guitar duets centered around the material of two artists who hold a particular importance to Rudd: Thelonious Monk and Herbie Nichols. Rudd was a dear friend and collaborator of Nichols and after the pianist’s untimely death from leukemia at 44 years old, Rudd became a torchbearer for Nichols’ trademark style and compositions. Rudd’s love of Thelonious Monk came when he first moved to New York in the 1950’s and began playing in Steve Lacy’s group. There he had the chance to meet Monk and listen to him play frequently. Rudd had an uncanny ability to listen to the piano icon and then be able to replicate what he was playing exactly. Rudd would revisit Monk’s material time and time again throughout his illustrious career, interpreting the great master’s compositions with a fluency and ingenuity that is unparalleled and unrelenting. This album marks Rudd’s final foray into the land of Monk, as well as his last interpretation of the music of his former bandleader and friend, Herbie Nichols.

Baker’s thoughtful accompaniment and enchanting, daring harmonic musings act as the perfect compliment to Rudd’s free-wheeling improvisation, showcasing his unparalleled avant mastery. Baker recalls “The whole process was enormously challenging and exhilarating. I still remember how surprised I was when Roswell told the audience after we played one of our collage pieces that I was the only person who could do this with him. My reaction was “I can do this?” I’m still not sure about that, but I was one of many, many younger players who gained invaluable insights working with this great musical spirit. He connected us not only to the beginnings of free jazz but also, through the musicians he had known and worked with himself, to the beginnings of jazz.”