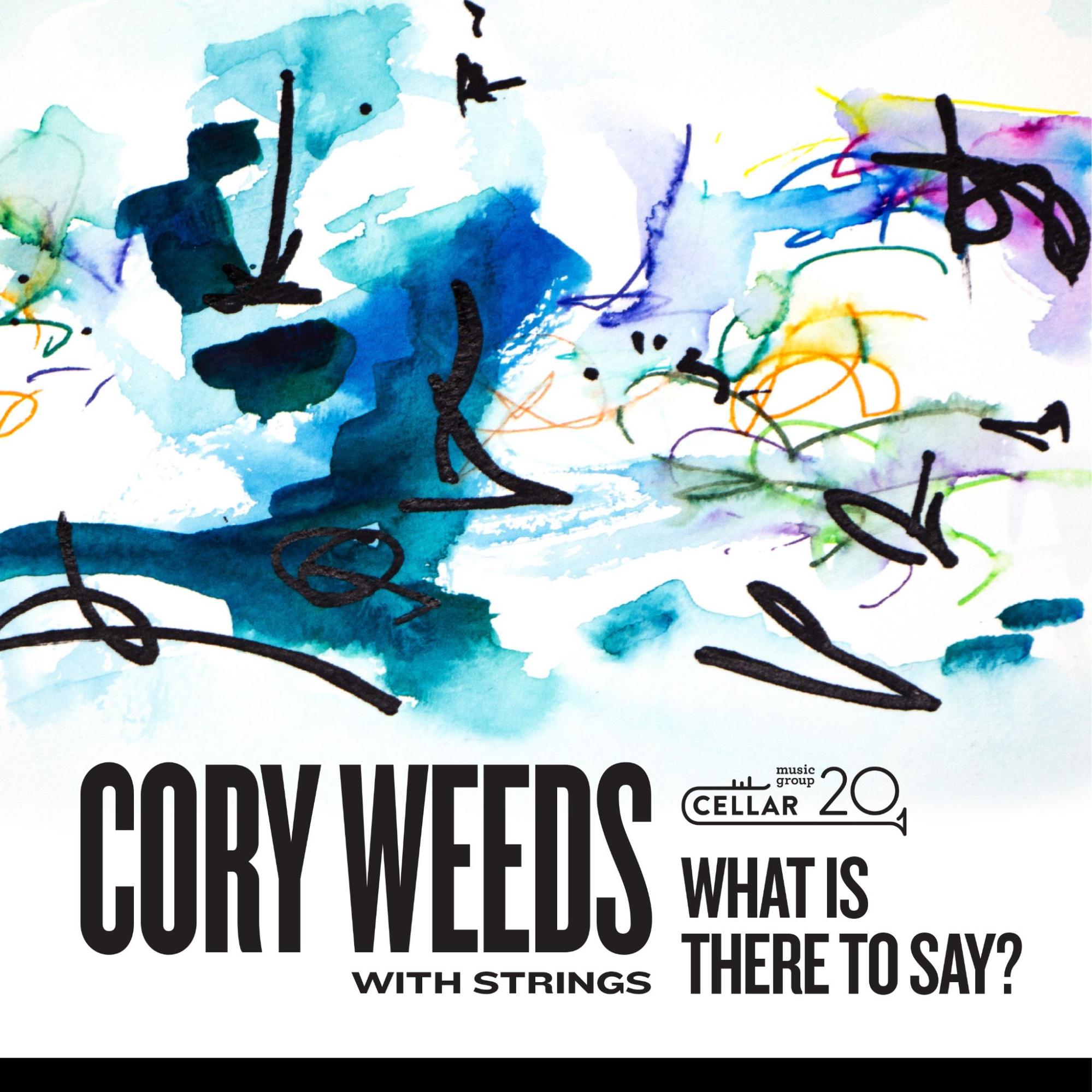 Cory Weeds Teams with Phil Dwyer and Strings on WHAT IS THERE TO SAY? Due out November 19, 2021 via Cellar Music

Cory Weeds, the saxophonist and creative and entrepreneurial force behind Cellar Music Group and its imprints—Cellar Live, Cellar Music, and Reel to Real Recordings— is proud to announce the November 19, 2021 release of What Is There To Say, his 18th album as a leader and first backed by a string orchestra. Though Weeds headlines and co-produces, he’s tapped saxophonist, pianist, composer, arranger, and bona fide Canadian jazz hero Phil Dwyer as the project’s other co-producer and de-facto music director; in addition to playing piano, Dwyer’s written all of the arrangements here, including those for the accompanying 13-piece string orchestra.

“I grew up kind of idolizing Phil Dwyer,” said the Vancouver-based Weeds who’s become Canada’s preeminent jazz ambassador. “Phil just made everything come off great. He wouldn’t be involved in a project if he didn’t believe in it.”

In order to ensure this would be a project Dwyer would really believe in, Weeds gave his pianist and arranger broad creative authority over all eight tunes here, even Weeds’ own. “I gave Phil carte blanche,” Weeds said. “I said to him, ‘Look, if you don’t like my originals, you are not going to hurt my feelings.’”

As it happened, Dwyer thought enough of Weeds’ originals to want to arrange them.

“Phil said, ‘Oh yeah, I can really make these good. Which, coming from him, was very flattering.” Weeds recalls. “In some ways [What Is There To Say] is almost more of a Phil Dwyer record; it’s really about the arrangements and the writing and the ensemble, rather than the individual playing.”

With the amount of thought and feeling Weeds puts into his own compositions, it’s no surprise they appealed to Dwyer’s sensibilities. Whether it’s a tune written for a longtime benefactor who’d always eschewed public acknowledgement—“Waltz for Someone Special”—or a ballad dedicated to his wife and her steadying equanimity— “Alana Marie”— Weeds is always communicating something personal.

No matter the subject matter, Weeds’ compositions never occur in a vacuum; that’s clear here. Case in point is “Love is Wild,” the last of Weeds’ three originals. It’s a close musical cousin of “Wild is Love,” the standard originally written for Nat King Cole with orchestrations by Nelson Riddle. Weeds heard saxophonist Sam Taylor record a version of the latter on his 2017 Cellar Live release Along the Way. Soon after, that music took up residence in Weeds’ always-churning mind until it became, well, something different—an original, yet also a send-up to Riddle, one of the forefathers of jazz with strings. Once that seed took root, Weeds knew he’d have to nourish it to viability.

“There’s a certain vulnerability with writing,” Weeds says. “Quite frankly, it’s terrifying…Every tune I’ve ever written is an idea that’s lived in my head to the point where if I don’t get it out onto paper, it’s going to make me crazy.”

Familiar faces and built-in chemistry help keep things less crazy, too. Though Weeds has never played with such robust orchestral accompaniment, he’s maintained continuity here by rounding out his rhythm section with bassist John Lee and drummer Jesse Cahill. “I have my people that I like to use when I’m doing a straight-up jazz gig,” says Weeds. “And I didn’t want to change that for this.”

Of course, when a saxophonist of Weeds’ stature puts out a “with strings” album, it’s anything but an ordinary jazz gig. We can all thank Charlie Parker for that. His iconic Charlie Parker with Strings albums threw down the gauntlet and became brass rings for woodwinders. Interestingly, Bird’s recordings were not Weeds’ primary inspiration here. Though, as Weeds found out, their immense stature in the canon makes those recordings hard for a saxophonist to escape.

“The record that really made me want to do a strings record was [baritone saxophonist] Gary Smulyan’s Gary Smulyan with Strings. And in fact, I presented Gary here in Vancouver doing that record. There was something about that sound in particular—I believe they had 12 or maybe 14 strings on that record, and then [at times] they doubled them up. And, actually, we ended up doing that, too, on some of this.

“Oddly enough, while I was recording this record, I got an opportunity to play with the Kamloops [British Columbia] Symphony doing the Bird with Strings music. It was just kind of funny that it all kind of came about when it did. But it was really that Gary Smulyan record—something about that sound.”

And there is something about this sound, too. Weeds and Dwyer clearly doff a cap to the songwriters whose standards were so famously recorded on Bird’s strings album. You’ll note that just as Parker and co. recorded a well-known Vernon Duke and Yip Yarburg tune (“April in Paris”), so, too, have Weeds and Dwyer with the title track, “What Is There To Say.” And just as Bird and co. played the Gershwins (“Summertime,” “They Can’t Take That Away from Me”), here, too, there’s love shown to George and Ira with the closer, Porgy and Bess’s “There’s a Boat Leavin’ Soon for New York.”

And yet, What Is There To Say? is anything but a baroque reproduction of standards. Dwyer’s string arrangements are crafty, lush, and decidedly contemporary, making for innovative new variations on classic themes.

“[Dwyer’s arrangements]…inspire Cory to search for new and evermore lyrical melodic lines,” writes saxophonist and Cellar Live label-mate Steve Kaldestad in the album’s liner notes, “while also giving him ample space to get lost exploring the nooks and crevasses of the music.”

Take the group’s treatment of Duke Pearson’s “The Phantom,” and notice how Dwyer’s retained the big-collared, prowling coolness of the original while using the strings to ratchet up tension by mixing long, bowed phrases with repeating angular riffs punctuated with winking pops of pizzicato. The relationship between the strings and Weeds’ voicey-yet-cool runs on tenor is a symbiotic one. They lend his lines gravitas; he lends theirs assertive coolness. And then, seamlessly, the piece evolves into a medley, anchored by a version of “The ‘In’ Crowd” that works just as well as Dwyer envisioned.

“I felt that we could pull [“The Phantom”] off,” Weeds recalls. “And Phil was hearing it—and he liked it—but he was hearing something else, too. So he said to me, ‘What would you think about a medley situation going into ‘The In Crowd’? And that’s not really even where I live musically, but when Phil Dwyer says something’s going to work, you listen. Not surprisingly, he did a great job and really kept the spirit of “The Phantom” the way I wanted it, which was awesome.”

“I Wish You Love” presents a noticeably distinct aesthetic. It’s a bossa-driven ballad with the type of august string introduction that brings to mind Gordon’ Jenkins’ arrangements for Frank Sinatra. All class and majesty.

Meanwhile, the opener, “At Dawning” might be most representative of how simpatico Weeds and Dwyer were in putting the album together. Weeds fell in love with the lyrical ballad when he heard it on At Ease with Coleman Hawkins (1960). “I gave it to Phil,” Weeds recalls, “and he heard [the fit] right away and said, ‘Yeah, this is happening.’”

In hearing Weeds interpret this carefully curated set of compositions, listeners really get to know him for the musician he has become: an expressive saxophonist with a unique and personal voice on his instrument. A visceral strength to his delivery on the tenor, while at times exposing a beautifully honest vulnerability as well. Phil Dwyer’s crafty lush string arrangements inspire Weeds to search for new and ever more lyrical melodic lines while also giving him ample space to get lost exploring the nooks and crevasses of the music. Weeds has compiled some real musical gems on his latest while also contributing an eclectic trio of original compositions to round out an extremely enjoyable musical program.