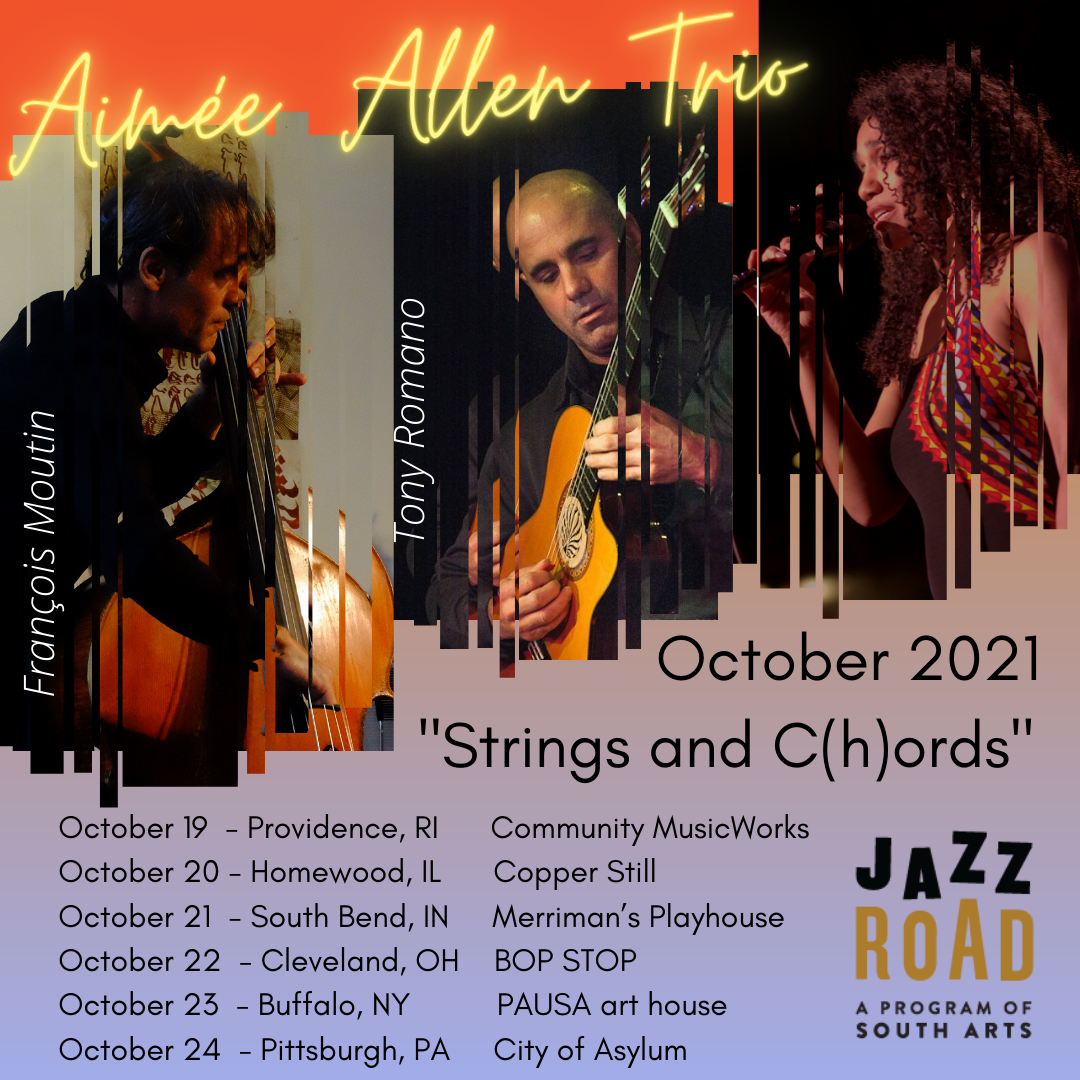 “Allen will mesmerize you with her voice and style. Wings Uncaged is a vastly different experience than the standard vocal jazz fare, that offers depth and reverence, while pushing the idiom forward,” – Steph Cosme, Staccotofy

Critically acclaimed vocalist Aimée Allen will showcase her talents across the United States this October. As a recipient of a prestigious SouthArts Jazz Road touring grant, Allen is utilizing these funds to bring together the Aimée Allen Trio, featuring the NYC-based talent alongside guitarist Tony Romano and bassist François Moutin.

The trio will open the tour in Providence, Rhode Island on October 19 at Community MusicWorks, followed by a stop in Homewood, Illinois at Copper Still on October 20,  an engagement in South Bend, Indiana on October 21 at Merriman’s Playhouse, an October 22 performance in Cleveland, Ohio at BOP STOP, an October 23 show in Buffalo, New York at PAUSA art house and a final performance in Allen’s hometown, Pittsburgh, Pennsylvania at the City of Asylum on October 24. Individual venue details, such as ticket information and COVID guidelines, can be found below.

Allen’s October tour will preview music from her upcoming album, slated for release in early 2022. A mix of thought-provoking original music and inspired renditions of standards, the new recording focuses on the overall concept of change. It features Romano and Moutin as well as Grammy-nominated pianist Toru Dodo and rising star drummer Kush Abadey.

The Aimée Allen Trio tour will reunite Allen and Moutin, longtime collaborators who gained notoriety together from Allen’s 2018 and 2015 releases Wings Uncaged and Matter of Time. The addition of Romano adds a new and refreshing take. The trio can be seen performing Allen’s original composition “In My Web” here as well as the original “Night Owl” here.

MORE ABOUT THE ARTISTS

Aimée Allen is a NYC-based jazz vocalist and songwriter who has released multiple critically acclaimed jazz albums that have charted on jazz radio. She has performed extensively in the New York metropolitan area and toured abroad as a headliner in France, Germany, Italy, Switzerland, Austria, Poland, the Czech Republic, Slovakia and Senegal. Audiences have come to know her for her original jazz compositions and evocative lyrics, as well as her innovative arrangements of standards and bossa nova. Her last release, entitled Wings Uncaged, featured musicians François Moutin, Billy Test, and Kush Abadey.  It was named one of Downbeat Magazine’s Best of 2019. Her original music has been licensed for feature film and network television. She has sung with many renowned jazz musicians including Romero Lubambo, Ron McClure, François Moutin, Roswell Rudd, Ari Hoenig, Joel Frahm, and Yomo Toro. In 2020, Aimée was the co-writer and interpreter of two songs on Fahir Atakoglu’s jazz release For Love. The album was a collection of Atakoglu’s compositions interpreted by multiple guest artists including Buika, Luciana Souza, and Romero Lubambo among others.

Internationally recognized jazz bass player, François Moutin has toured extensively all over the world, most recently in France and Switzerland with Aimée in mid-March 2020. However, he has toured for years with a trio including Ari Hoenig and Jean-Michel Pilc, and also with a succession of world-renowned bands with his brother Louis Moutin, with the Moutin Reunion Quartet, and more recently the Moutin Factory Quintet. He also has toured with Mike Stern and Rudresh Mahanthappa. From 1988 on, he has toured consistently around the world (performing about 10 tours per year on average) with artists such as Martial Solal, Jean Michel Pilc, Michel Portal, Peter Erskine, Nguyen Le, Randy Brecker, Toots Thielemans, James Moody, Michel Legrand, Lee Konitz, Franck Wess, Ari Hoenig, Mike Stern, Rudresh Mahanthappa, Lew Soloff, Steve Kuhn, Billy Hart, Jeff Tain Watts, Victor Lewis, Dave Liebman, Mulgrew Miller, Harry Belafonte, and Joachim Kuhn, in major venues and festivals in countries on all 5 continents. About a quarter of these tours have been with projects François co-led.

Guitarist Tony Romano has toured extensively throughout the world as both a sideman and as a co-leader, performing at major festivals, concert halls and clubs. Tony started touring in 1994 in Germany and Austria for the Germany based Normal records with singer/songwriter Melissa Lou, then spent 10 years touring with Latin Soul pioneer Joe Bataan. As a co-leader of the Lenny Sendersky-Tony Romano group, he has toured extensively in Russia, Belarus, Israel, Cyprus, and the U.S.

October 20 – Copper Still (Homewood,  IL) – 7:30pm (two sets, short break) – All individuals in the Illinois, Cook County area are mandated to wear masks in doors in all public areas of all bars and restaurants regardless of vaccination status.  Once the patron is seated they are free to remove their mask.  All of the staff at Copper Still are mandated to wear masks.