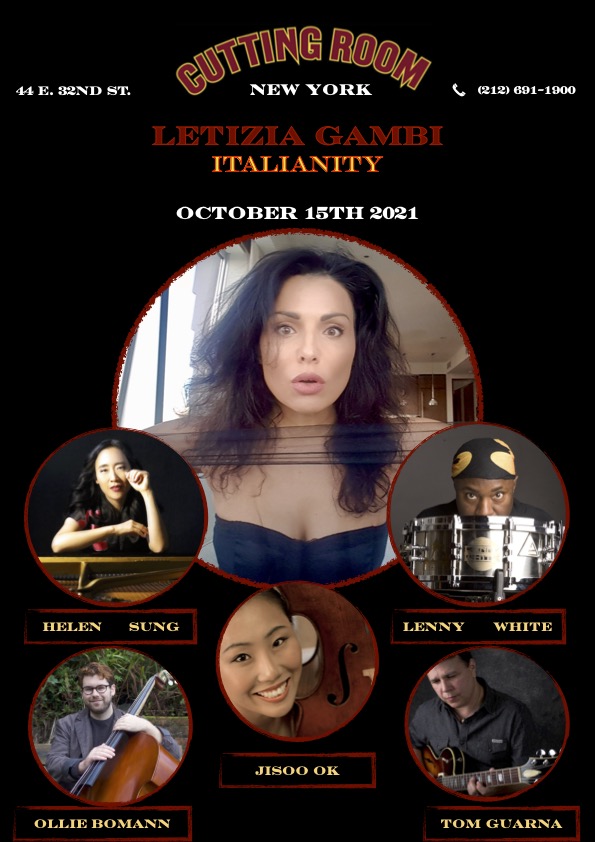 Grammy-nominated international vocalist Letizia Gambi will perform at the Cutting Room in New York City this October 15, 2021 at 9:30 and 11pm. Gambi will be joined by her longtime collaborator, the legendary American jazz drummer Lenny White to perform several of their co-written originals. Gambi’s show will also preview new compositions from her upcoming album and a selection of uniquely-arranged covers.

This upcoming show will be performed in English, Italian and Neapolitan. Alongside Gambi and White, pianist Helen Sung, cellist Jisoo Ok, guitarist Tom Guarna and bassist Ollie Bomann will bring their talents to the stage.

“I’m excited to be back on the stage again,” Gambi shares. “I believe that live music is a magic cure. It heals the listener and the musician at the same time.”

Letizia Gambi‘s music is a combination of her Neapolitan-Italian roots with the heritage of Black American Jazz. Her Mediterranean passion sings through Jazz’s language in a contemporary, personal style.

This international award-winning singer-songwriter is considered one of the most versatile and talented vocalists of her generation. She has recorded and worked with many renowned artists, including Gato Barbieri, Chick Corea, Ron Carter, Gil Goldstein, Wallace Roney, Patrice Rushen, Lenny White, Donald Vega, Helen Sung, Dave Stryker and Antonio Farao.

Her two albums, Introducing Letizia Gambi (2012) and Blue Monday (2016), were candidates for Grammy Awards as Best Vocal Jazz Album and Best Arrangements for Vocals. Both were produced by legendary Lenny White.

For more ticket information and details on the venue, please visit http://thecuttingroomnyc.com/.

As per NYC guidelines, The Cutting Room requires proof of vaccination to attend.