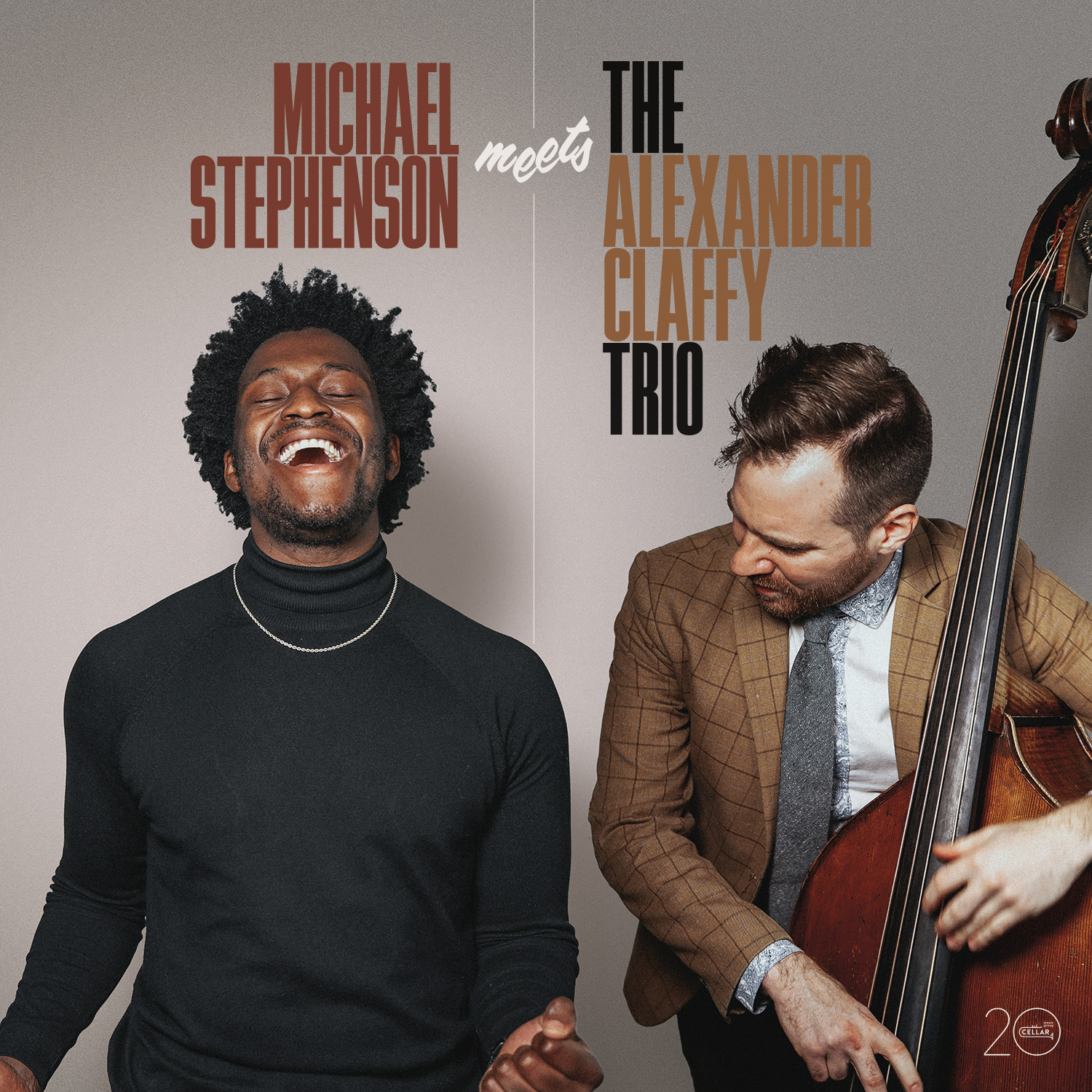 Cellar Music Group is pleased to announce the release of Michael Stephenson Meets The Alexander Claffy Trio. This jubilant new project marks the first recorded collaboration between celebrated musicians Michael Stephenson and Alexander Claffy, capturing a deep friendship that spans two decades. Twentieth century American popular music is one of the greatest artistic gifts ever given to the world — and barely anyone talks about it when discussing America. In contrast, vocalist and saxophonist Michael Stephenson and bassist Alexander Claffy have made an album that leads with that message. It revels in it — and it does so at a critical moment. This recording marks the debut of a new ensemble under the leadership of Claffy, featuring the eminent young pianist Julius Rodriguez, in-demand drummer Itay Morchi and acclaimed trumpeter Benny Benack III.

Michael Stephenson, also known by his stage name Sonny Step, is a singer-songwriter and multi-instrumentalist who has worked alongside such acclaimed artists as Rihanna, Ricky Martin, John Splithoff, and Kate KS. “From the first notes I ever heard,” Stephenson notes, “I’ve always had a love affair with Jazz, and while it has always been a big part of my musical identity, it has been perhaps in the background somewhat. My goal for this album was to joyfully unveil that side of my artistry, which until now hasn’t taken center stage.” Michael Stephenson Meets the Alexander Claffy Trio reveals a nuanced jazz vocalist with an uncanny facility to bring melody and lyric alive with fervent emotion.

Alexander Claffy is an accomplished bandleader and sideman and one of the most in-demand bassists worldwide. Claffy has released three critically acclaimed studio albums and has performed and recorded with such luminaries as Jimmy Cobb, Harold Mabern, Kurt Rosenwinkel, Orrin Evans and Randy Brecker. Claffy provided the masterful arrangements for this electrifying release. “I’ve welcomed the challenge of arranging an album that I believe supports and showcases Michael’s superb talents”, the bassist and bandleader indicates, adding: “Michael and I have been dear friends since the age of 13, and this record encapsulates our many experiences growing together, while bringing our Philly soul to the hallowed grounds of the Rudy Van Gelder Studio.”

The musical potency of Michael Stephenson Meets the Alexander Claffy Trio can be in-part attributed to the support of the album’s producer Jeremy Pelt, who Claffy notes is “one of the best producers I’ve ever worked with.” This is the second collaborative effort between Pelt and Cellar Music Group and part of their joint initiative to showcase the voices of Black artists.

Powerful themes of love, loss, and unity are threaded through the project which makes great use of material from 20th century American composers. Michael Stephenson Meets the Alexander Claffy Trio extends the notion of a ‘standard’ beyond the oft-played American songbook to such a wide array of heralded compositions as the “Tennessee Waltz” and “When A Man Loves A Woman”. From the music of Nat King Cole to Ray Charles and Marvin Gaye, the album uses the music of the past to make a statement – in the face of injustice, inequality and racism, this music reminds us of our capacity to love, to hold each other and dance, and to agitate to create a better future.

Tracks like “When a Man Loves a Woman” and “Can’t Hide Love” demonstrate the band’s capacity to transform a popular song into a jazz masterwork that underscores Stephenson’s tremendous vocal performance with sensitive accompaniment while also exploring the harmonic ethos of each piece with beautifully evocative reharmonizations and improvisations.

“Polka Dots and Moonbeams”, “On The Street Where You Live” and “Did You Call Her Today” sit squarely within the jazz tradition, highlighting the outfit’s immense improvisational prowess and deep knowledge of the vocabulary of jazz. Ben Webster’s “Did You Call Her Today” features the musical polymath Stephenson on saxophone, showing audiences an entirely different side of his musicality. Claffy remarks “Never before has there been a male jazz vocalist at the forefront of the industry who also is deeply adept at the saxophone – Michael is exceptional.”

Michael Stephenson Meets The Alexander Claffy Trio will be released digitally on September 10th, as a compact disc on September 17th, and as a vinyl LP on October 15th.