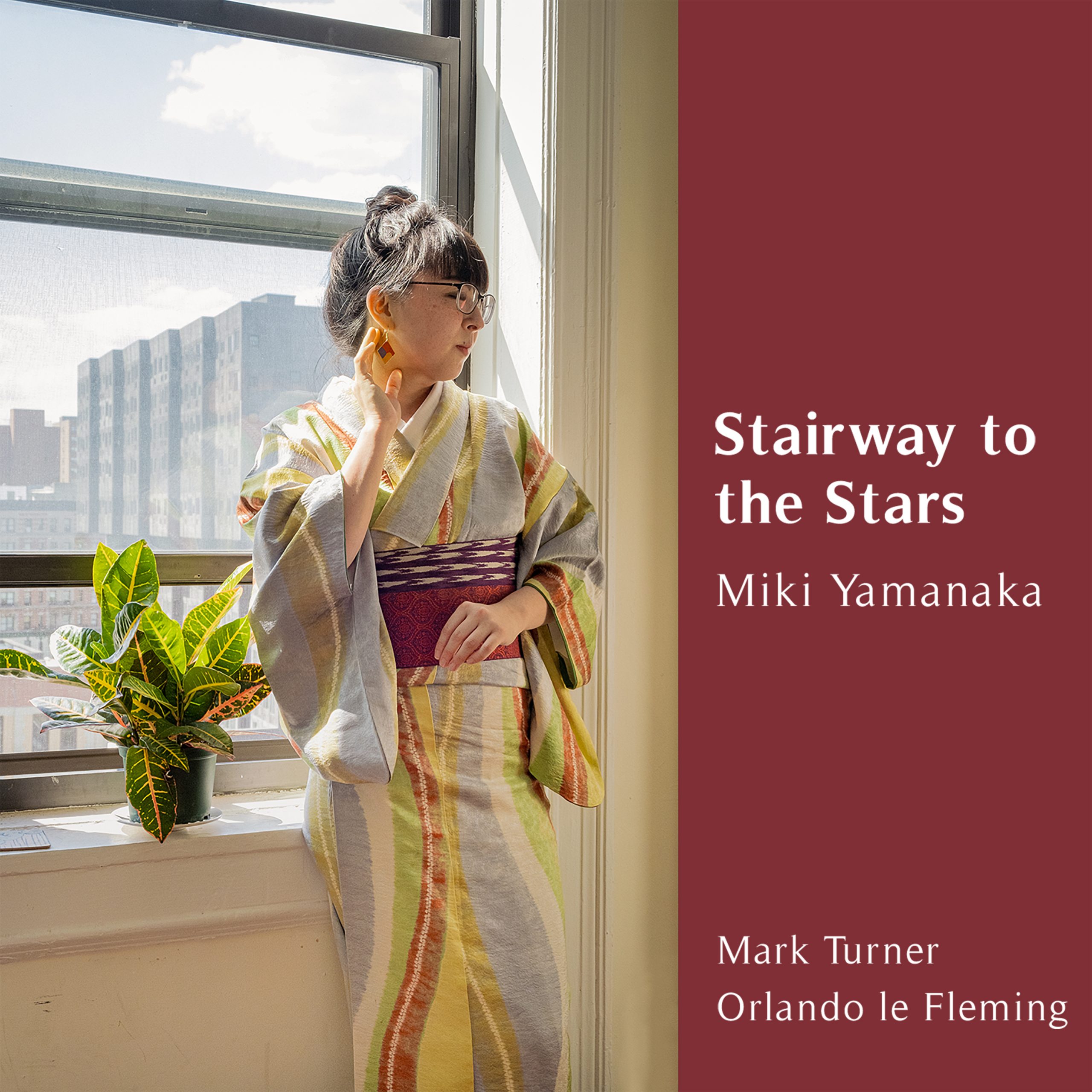 Celebrated Pianist, Composer and Bandleader Miki Yamanaka Announces the Release of Her Upcoming Trio Record, Stairway to the Stars, Featuring Saxophonist Mark Turner and Bassist Orlando le Fleming, Out October 1st on Outside In Music

Outside In Music is pleased to announce the October 1st release of Stairway to the Stars, an intimate, pared-down glance into renowned pianist Miki Yamanaka’s musical ethos. A follow-up to 2020’s Human Dust Suite, Stairway to the Stars was recorded on August 12, 2020. Initially slated to be recorded live in front of an audience at Mezzrow Jazz Club during one of Yamanaka’s monthly weekend performances, 2020 had other plans for this esteemed pianist as the city shut down amidst a global health crisis. Recorded at home, Stairway to the Stars captures a fiercely immersive trio session featuring Miki Yamanaka on piano alongside consummate bassist Orlando le Fleming and acclaimed saxophonist Mark Turner.

2020 was no ordinary year, and this is no ordinary album – Stairway to the Stars features a drumless configuration of piano, saxophone and bass and yet does not sacrifice one iota of stellar rhythmic invention. Yamanaka brings a nuanced intensity to the eight tunes presented on this album, especially her two original pieces, “Oatmeal” and “Wonder”. Stairway to the Stars is released while the pianist, composer and bandleader is fresh off the heels from her second studio release Human Dust Suite, which was hailed by master organist Larry Goldings as “a wonderful example of the breadth of Miki’s musical vision” and “a seasoned follow-up to her widely recognized debut Miki” by Mike Jurkovic of All About Jazz.

Yamanaka’s fervent, muscular performance is only augmented by her esteemed houseguests Orlando le Fleming and Mark Turner, both of whom are prolific bandleaders and sidemen with a who’s who of jazz luminaries. Yamanaka notes “I was always a huge fan of Mark, and had never gotten to play with him before COVID. He is busy usually, as a leader and a sideman. I was too excited when both of them showed up to my apartment!”

The ensemble lends its instrumental agility and refinement to a diverse array of jazz classics including old chestnuts such as “My Melancholy Baby” and “Tea For Two”; as well as  bebop hits such as Charlie Parker’s 1947 composition “Cheryl”, and Steve Swallow’s lush composition “Eiderdown”. Each composition activates new territory for the seemingly boundless outfit to explore, leaving the listener with a comprehensive album that acts as a masterclass in interplay and dynamics.

Yamanaka notes “I will never take it for granted to be able to be with my favorite people making music, drinking nice wine, eating nice food together, ever again. It made me realize how important that is in my life.” Stairway to the Stars seemingly captures the excited, joyous energy of a confluence of fine musicians and friends gathering together to do what they do best.

The Kobe, Japan native, who has lived in New York City since 2012. A student of Jason Lindner, Jeb Patton, Fred Hersch, Sam Yahel, and Larry Goldings, in 2015 she was one of three pianists selected to participate in “Betty Carter’s Jazz Ahead”, an intensive composition residency at the Kennedy Center. She earned her Master of Music degree from Queens College. Miki has appeared in concert with many notable musicians including Steve Nelson, Seamus Blake, Jerry Dodgion, Victor Lewis, Rich Perry, Antonio Hart, and Peter Bernstein. She holds residencies at Smalls and Mezzrow Jazz Clubs in New York City and has had multiple week-long engagements at Dizzy’s Club Coca Cola since 2016. She is the current pianist in the Philip Harper Quintet, the Roxy Coss Quintet, and the Antonio Hart Group. Miki recorded an EP, “Songs Without Lyrics” in 2012, which featured Lawrence “Lo” Leathers, Tivon Pennicott, and Spencer Murphy, she released her aforementioned debut album, “Miki” with Steve Nelson, Orlando le Fleming, and Bill Stewart in 2018 and “Human Dust Suite” in 2020 alongside alto saxophonist Anthony Orji, bassist Orlando le Fleming, and drummer Jochen Rueckert.