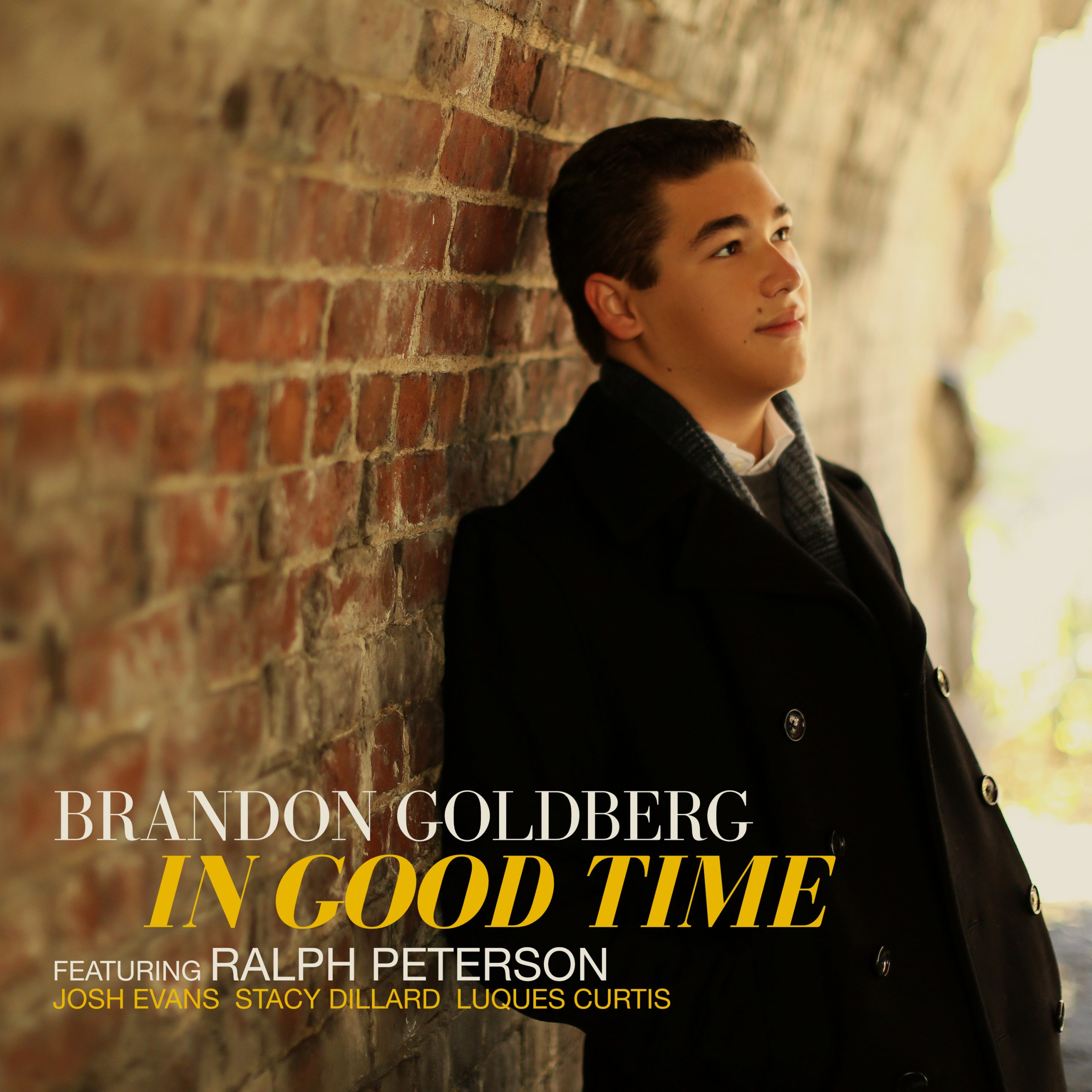 Pianist, composer and bandleader Brandon Goldberg is thrilled to announce the release of his second album, In Good Time. A follow-up to 2019’s critically-acclaimed LET’S PLAY!, Goldberg approaches In Good Time with a refined, seasoned sensibility and is joined by a top-shelf quintet through five original compositions and five smartly arranged jazz standards. Showcasing Goldberg’s pianistic prowess and stunning compositional facility, the album features the 15 year old instrumentalist in a powerhouse trio with late drum giant Ralph Peterson and heralded bassist Luques Curtis, filled out by a supple horn section made up of saxophonist Stacy Dillard and trumpeter Josh Evans. Trumpeter Antoine Drye makes an appearance on the album’s closing track for a duo performance with the bandleader. In Good Time will be available on all platforms on September 17, 2021.

Three years ago, when pianist Brandon Goldberg was 12, he turned heads with his accomplished debut project LET’S PLAY!, a compelling trio recital with upper-echelon jazz veterans Ben Wolfe on bass and Donald Edwards on drums on which he functioned as a musical peer in an equilateral triangle. Now, fully in command of his materials, Goldberg spotlights considerable instrumental faculty while presenting a program that gives each member ample space to express individualism while also fulfilling collective imperatives. The pieces convey a broad range of emotional and timbral flavors through Goldberg’s sophisticated refraction of a long timeline of improvisatory dialects and compositional strategies culled from a century of Jazz, Black American Music, and American Songbook expression.

“I really love Brandon,” says jazz saxophonist Donald Harrison. “He will be one of our most important musicians and he has always been a gentleman. It makes me happy to see him grow up before my very eyes. He is a family member to me.”

Goldberg displays an impeccable synergy with the incomparable rhythm section made up of Luques Curtis and drum legend Ralph Peterson. Here, the late drummer exudes a characteristic energy, soulfulness, and focus which is reciprocated and amplified by Goldberg. Devastatingly, the master drummer and educator would pass three months after the completion of the album, after his fierce six-year battle with cancer. “Ralph was pure intensity,” Goldberg said in May after In Good Time was fully sequenced and mastered. “If you reached a point where you got comfortable, he’d play something completely unexpected to put you on edge.” Aside from the notes and tones, Goldberg added, Peterson “had something to do with everything in this project.” Their relationship began in 2018 at the Litchfield Jazz Festival when pianist Orrin Evans – a Goldberg advocate since teaching him two years earlier at Litchfield Jazz Camp – introduced them. “Ralph gave me his card and said, ‘Dial it, don’t file it,’” Goldberg continued, “Once we got serious and I started writing, we talked about once a week,” Goldberg recalled. “But even before, any time I needed help with music… he said he wanted to tell me what not to do, but not what I should be doing, because he never wanted to get in the way of what I wanted. That’s how he was, and he said that’s how Art Blakey was with him.”

Peterson’s signature raspy voice begins the record in a voicemail that he sent the young bandleader prior to the album’s conception, setting the stage with a heartfelt reminder of the late drummer’s tenacity and dedication to the legacy of jazz. The voicemail fades and the listener hears Goldberg’s unwavering voice count the group off, echoing the urgency of Peterson’s voicemail, Goldberg is ready to get down-to-business and the bright-tempoed swing of Goldberg’s original composition “Authority” reflects just that. This sprightly ensemble-piece harkens back to the hard-bop sensibilities of the Jazz Messengers and includes masterful solos from Goldberg, Dillard and Evans. Goldberg demonstrates his gift for melodic invention on his originals “Circles” and “Time”. The former, titled for its repeating theme, features Dillard’s lyric, soaring soprano saxophone atop Peterson’s undulating, authoritative brushstrokes. The latter begins as a ballad, poignantly stated by Evans. Curtis’ lyric meditation follows, then Evans uncorks an improvisation that resolves on the head, whereupon the tempo transitions to medium-bright (Peterson percolates again on brushes) for another inspired Dillard declamation.

Goldberg’s interpretations of classic jazz compositions demonstrate the young players ability to tip-the-hat to the composer of the piece while also bringing something new to the table. “Monk’s Dream” captures the idiosyncrasy of the composition while Goldberg also explores its harmonic richness with adept vertical playing that outlines the changes tastefully and tells a cohesive story. The piece also features an iconic, fiery solo from Peterson, bringing the tune back to its head. Goldberg further channels the sonic palette of late ’60s Miles on “Stella By Starlight,” which he addresses on Fender Rhodes, dressing up the old chestnut with fresh melodic variations and a 6/8 feel. A stately duo of Sondheim’s “Send In The Clowns” with gold-toned trumpeter Antoine Drye acts as the pianist’s encore. Goldberg leaves the audience on a tender note, providing a nuanced grace to the conclusion of an album which will surely cement Goldberg’s stature as a preeminent fixture in the scope of jazz.

JazzTimes writer Ken Franckling notes “He understands the basics and nuances of making jazz – and swings like mad in the great company of his trio mates.”